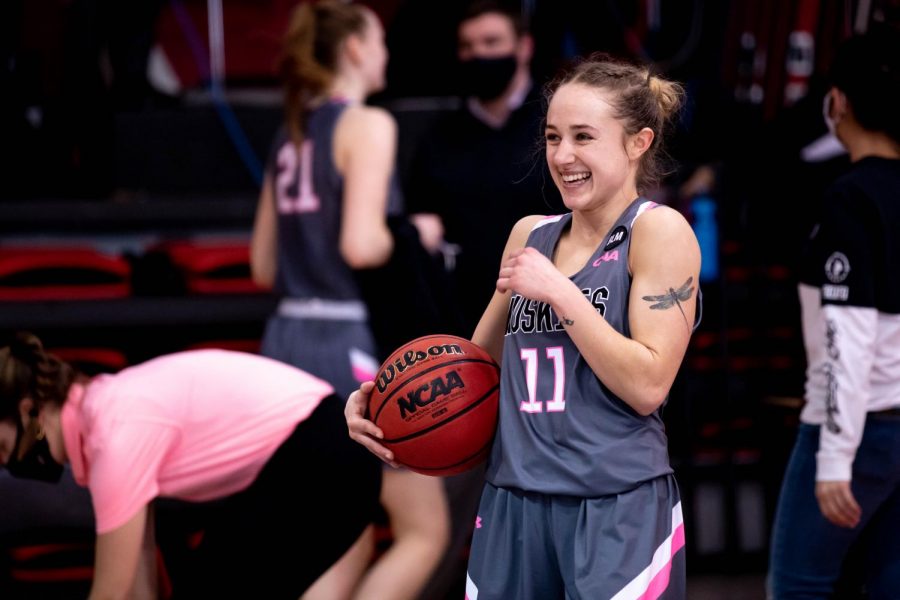 Stella Clark finished Senior Day with her 1000th point en route to a win over Towson.

Although friends and family couldn’t attend Senior Day, it was a memorable one as senior guard Stella Clark made her 100th appearance, 57th start and 1000th career point. Although graduate student Ayanna Dublin didn’t put up many points offensively, she grabbed eight boards to her name, helping to get the well-deserved Senior Day win, 72-62, over the Towson Tigers (11-4, 6-2 CAA). This game was also the annual Play4Kay game to draw awareness and fundraise for the Kay Yow Cancer Fund.

To open the first frame, freshman guard Maddie Vizza dropped a deep three over the outstretched arms of the mismatch on the court by the Tigers defense. With the hot offense at the start of the game, Dublin pushed past two defenders to score her first points of her Senior Day game to break the tie, 5-3.

Despite the great offensive start, NU turned the ball over five times over the last five minutes of the first quarter, allowing the Tigers to catch up and end the frame tied at 11.

Vizza hit back-to-back-to-back triples, assisted by both seniors, to gain back the 29-24 lead, which sent the Huskies on a 9-0 run over a minute of play. The Huskies held onto their lead as they went into the break, 31-28.

“I told Maddie on the bench the other day, ‘The only thing you can’t do as a freshman is play cautiously,’” said head coach Kelly Cole about Vizza. “You have to do what you do because that’s why we have you on the floor and for the first time she owned it.”

Sophomore forward Mide Oriyomi padded the lead with a triple to open the half for the Huskies. Triples for Vizza were her bread and butter, having made six at that point. Dublin converted the layup to keep the lead, 45-43. With a little under two minutes left to play, NU committed some offensive fouls that helped to keep it a one-possession game. Clark hit the triple to continue to pad the 48-44 lead into the final 10 minutes of play.

With the final 10 minutes underway, NU needed to continue the strong offense they’ve shown throughout the game. In her postgame interview Saturday night, Cole said they needed to play 40 minutes of solid play instead of 30, like yesterday’s game, and they did just that.

“We didn’t change a whole lot of anything, our defensive plan was exactly the same. What we worked on was our offensive game,” Cole said. “We controlled the tempo of the game today.”

A fire was lit under the NU squad to end the game strong as Clark and Currence hit back-to-back triples to start the frame’s scoring for NU. The strong effort continued with another pair of triples by Currence and Clark, which gave NU their largest lead of the night, up by 13 points. The Tigers sent Clark to the charity stripe to end the game as she converted her 1000th career point and became the 23rd player to join the club, the most recent being Shannon Todd who graduated last year.

“They weren’t the most important foul shots I’ll ever take because we were already going to get the win, but it meant a lot to be able to score the 1000th in Cabot,” Clark said.

Notable players for the Huskies included Clark who scored 27 points and had six rebounds and seven assists, Vizza who had 23 points and went 7-for-10 on triples and Currence who had 10 points and seven rebounds.

The Huskies (4-11, 3-9 CAA) will go back on the road for one final away series against the University of North Carolina at Wilmington (3-9, 0-6 CAA) next weekend, playing both games at 1 p.m.