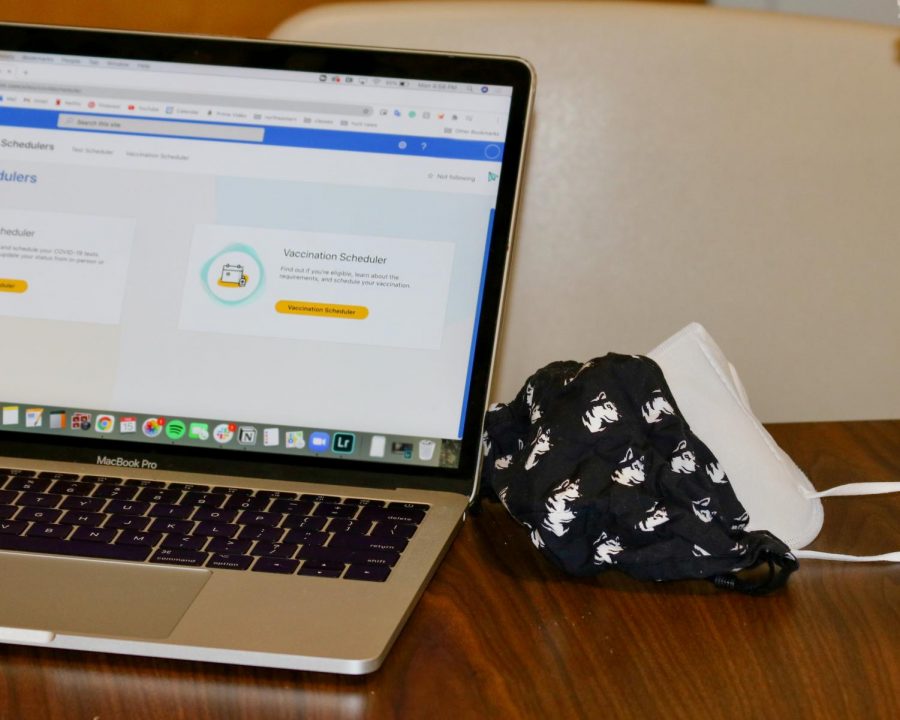 Photo illustration by Harriet Rovniak. Since Northeastern was designated as an official vaccination site for the state of Massachusetts in December, the university has been vaccinating members of the Northeastern community.

After rolling out COVID-19 vaccines to students and staff for nearly a month, Northeastern University slowed the progression of its vaccine distribution plan Jan. 26 at the behest of Massachusetts state officials.

Northeastern was designated as an official Massachusetts vaccine distributor in late December 2020 and had been administering doses of COVID-19 vaccines at the Cabot Testing Center as part of Phase One of the Massachusetts vaccine distribution plan. According to an email sent Jan. 9 to all members of the university, administrators have been vaccinating staff who work at the Cabot Testing Center, the Life Sciences Testing Center and University Health and Counseling Services since early January. The email says that Northeastern has been authorized to distribute the vaccine to university students, faculty, staff and external vendors.

However, Massachusetts state officials ordered Northeastern to pause the rollout Jan. 26 in order to focus on the elderly at-risk community and to stay compliant with state restrictions. After vaccinating the university’s Phase One population, which included front-line workers at Cabot Testing Center, there were over 2,000 doses left in the university’s supply. University officials originally made plans to continue distribution and vaccinate additional employees included in the Phase Two populations.

NU spokesperson Jessica Hair wrote in an email statement to The News Feb. 4 that the university “learned that there are hundreds of thousands of Phase 1 workers across the state who have yet to be vaccinated.”

“In order to support the Commonwealth with this very important effort and to help healthcare workers in hard-hit areas, we donated our surplus doses to the state,” Hair wrote.

Dr. Brandon Dionne, an assistant clinical professor at the Northeastern School of Pharmacy, said that it has been a challenge for the university to balance the number of doses it receives with the university population qualified to receive the vaccine.

Dionne noted the difficulties of distribution during Phase Two. He said the university has to coordinate vaccinations with vaccine shipments, which may not be consistent. Additionally, NU has to account for how many doses the state receives as well as who is eligible.

“I don’t know that [the university wants] to get too far ahead of the state’s rollout because we have to think about equitable distribution of the vaccine,” he said. “We definitely want to vaccinate people at Northeastern as fast as we can, but we don’t want to take doses away from other people who need it.”

Phase Two of the Massachusetts vaccination distribution plan began Feb. 1 with an initial expansion of vaccine access for individuals over the age of 75. The Commonwealth has not yet expanded access to the other populations falling under the Phase Two distribution plan. Phase Three is not expected to begin until April.

In the email statement, Hair wrote that administrators are now vaccinating members of the university community over 75.

Other groups, including those over 65, those with one or two comorbidities and essential workers, will be eligible later as the Commonwealth completes the initial stages of Phase Two distribution. In a Jan. 20 email, Northeastern officials announced that university community members would be able to submit an attestation form to determine whether they are qualified to receive a vaccine in Phase Two.

Grace Kryzanski, a second-year health science major, works in Cabot as a patient care associate. She received her first dose of the Pfizer vaccine upon her return to campus in January.

Kryzanski said that the university was clear in its communication regarding the vaccination process.

“Once your phase is available, they’re very straightforward about how you come in and sign up,” she said. “They’re definitely very serious about doing whatever they can to stop the spread.”

Kryzanski believes early vaccination of students and front-line workers may encourage others to follow suit.

“I think it’s helpful to vaccinate workers like me so that other college students and the general public can see that it’s not just an elite group of people working in the healthcare field [receiving vaccines],” Kryzanski said.

Some Northeastern students have received vaccines from their co-op employers. Those working in hospitals or other healthcare jobs across Boston may be eligible to receive both doses of their vaccine in accordance with the Massachusetts vaccine distribution timeline.

Lindsey Hurd, a second-year nursing major, is on co-op as a patient care associate at Brigham and Women’s Hospital in Boston. She said that she received the first dose of the Moderna vaccine before she began her in-person job in early January.

Hurd was notified through the hospital’s database that she was eligible to be vaccinated in the hospital’s first wave. Similar to Kryzanski’s experience, she found the vaccination process to be relatively straightforward.

“It was actually very simple and easy,” Hurd said. “I just signed up, walked over and got it and then had work the next day.”

Like Kryzanski, Hurd feels grateful to have received the vaccine in an early phase of the rollout.

“I’m very thankful that I had the opportunity to get it and I consider myself very lucky to be able to be working during this time,” she said. “It makes me a little more comfortable with going on the T in the morning for work.”

Though Kryzanski and Hurd may develop immunity to COVID-19 following their second dose of the vaccine, and say that they are hopeful for the future, they plan on continuing to follow all guidelines in order to protect their community.

“I definitely wouldn’t say it changes what I do and how I conduct my life because I definitely want to protect as many people as possible,” Kryzanski said.

Health experts have not yet determined whether vaccination prevents transmission of the coronavirus. Accordingly, the CDC recommends that vaccinated people continue to follow mask-wearing and social distancing guidelines, even after being fully vaccinated.

Dionne said that he expects a significant portion of the university’s population would have to be vaccinated before students and faculty could begin returning to pre-pandemic behavior. Additionally, he said he is doubtful that the university would be able to develop self-contained herd immunity, meaning the state would also need to reach high levels of immunity before students on campus could responsibly return to pre-pandemic behaviors.

Students come into contact with high-risk individuals in Roxbury, a predominantly Black neighborhood whose residents have faced disproportionate health risks over the course of the pandemic.

While Northeastern’s goal is to vaccinate the entire university community by the end of the spring semester, Dionne stressed the importance of patience with the vaccine process.

“I think that even though we may not be able to get back to normal as quickly as we hope and being vaccinated doesn’t mean that you can go totally back to normal, it’s going to help us get there and it’s going be necessary for us to get there,” Dionne said. “So it still is super important [to get vaccinated].”