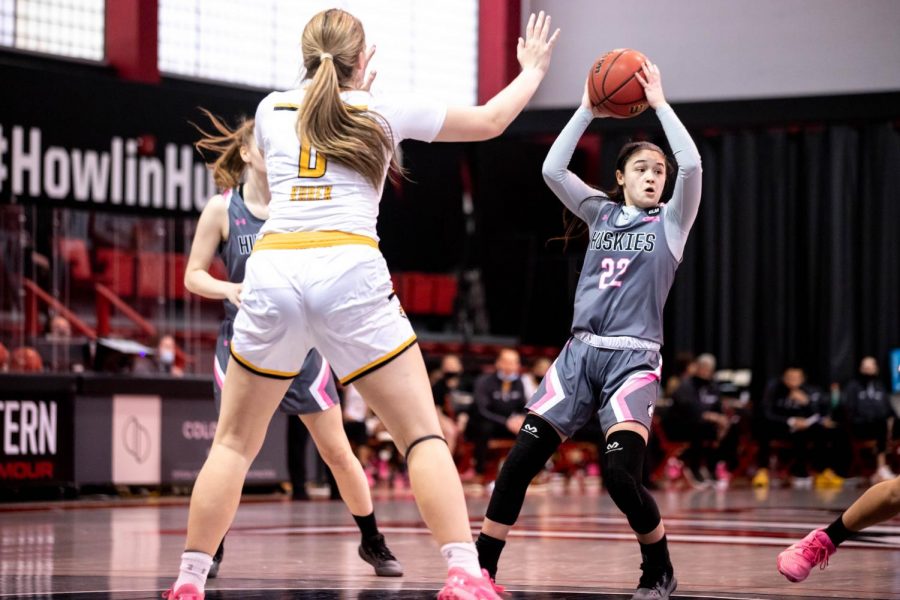 Freshman guard and CAA Rookie of the Week Maddie Vizza took the spotlight again today in the second straight CAA win for the Northeastern women’s basketball team, this time against UNC Wilmington, putting up 16 points to lead the pack in their 63-52 win.

“UNCW has some great young talent and the thing for us we just need to lock onto the things we do well and execute,” said head coach Kelly Cole, previewing the weekend series.

To start off the opening frame, sophomore forward Mide Oriyomi grabbed a rebound off Vizza’s shot to score the reverse layup. Senior guard Stella Clark, still riding the high of her monumental game against Towson, hit a triple to take the early lead. An almost full-court pass by Clark found Vizza in the pocket, who sank the three. With a strong offensive start, the Huskies were up by a point at the horn, 14-13.

The second quarter is where the Seahawks pulled away with the lead as NU was outshot and outscored 17-8. Strong efforts by graduate student Ayanna Dublin and junior guard Kendall Currence weren’t enough to retain the strong early start, with NU shooting only 25% for the frame and going 0-for-8 on attempts behind the arc.

Vizza decided it was her time to shine yet again. After setting the freshman single-game three-point record in last week’s outing against Towson (11-5, 6-3 CAA), she once again made it her bread and butter for the night, shooting 4-for-4 beyond the arc during the second half to help the late comeback by NU. With the help of Vizza and her triples, NU was back within a single possession entering the final 10 minutes of play.

“Maddie [and Mide] found a way to put the ball into the basket and that was what we needed in the end,” Cole said.

Within the opening five seconds, Oriyomi found the bottom of the net to tie the game at 40. Back-to-back triples by Vizza and Clark gave the Huskies the lead for the first time since they lost it in the second frame. Sophomore guard Mossi Staples decided she wanted to join the deep triple fun, making her own to pad the increasing NU lead. Oriyomi earned her fourth double-double of the season and the Huskies walked away with the win, 63-52.

“We started off the contest a little slower than I hoped, but we came out in the second half and took care of things on both the offensive and defensive ends,” Cole said.

The Huskies dominated in the second half of the game, converting 42% of their shots in the third quarter and 71% for triples in the fourth, keeping UNCW at less than 35%.

Notable players for the Huskies included Vizza who dropped five three-pointers and left the court with 16 points. Clark finished with 14 points and six assists, Staples with 13 points and Oriyomi with 10 points and 11 rebounds.