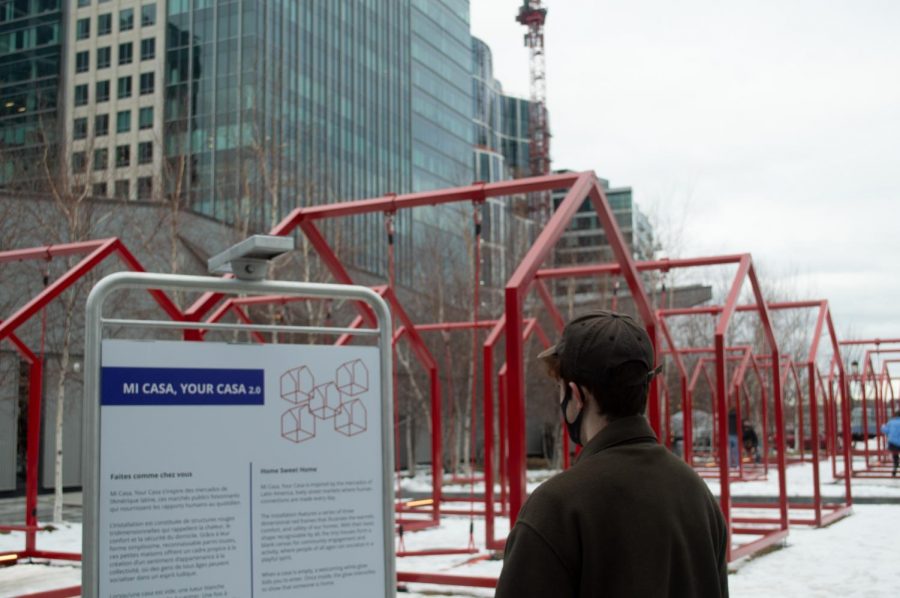 "Mi Casa, your Casa 2.0" is on display at Seaport Common until March 14

Boston’s Seaport installation “Mi Casa, Your Casa 2.0” plays on themes of childhood and home, while remaining six feet apart. Installed on the Seaport Common, this art installation by Hector Esware and Ignacio Cadena is socially distant and visually compelling.

16 red frames, each in the shape of a small house, sit alongside one another. Inside each, there is a swing and a ring of lights lining the bottom. When the house is empty, the lights glow dimly to welcome the next visitor. Once someone steps inside, the lights release a more powerful glow, indicating that someone is home.

Hector Esrawe and Ignacio Cadena said when they combined their respective firms in 2004, Esrawe and Cadena + Asoc., to create the original “Mi Casa, Your Casa” for the High Museum of Art in Atlanta, they hoped to foster a sense of community in the museum’s plaza.

Over the last 15 years, Esrawe and Cadena have collaborated on a number of projects, like “los trompos” and even a bottle of perfume.

Cadena and Esrawe also share a Latinx background, but they work in different areas of design, which influences the differing style they bring to their collaborative work.

“Us being Latin Americans, [‘Mi Casa, Your Casa’] has a playful spirit through it. In a way, even though philosophically, they are profoundly designed to connect, they’re also meant to be used as a playground,” Cadena said.

Cadena explained that COVID-19 has impacted the piece’s message in certain ways.

“In this pandemic era, it’s a natural fit [for Boston] because it becomes a three-dimensional canvas for people to slowly start moving towards public spaces again,” he said. “Being safe and saying they are becoming part of something that is larger — that is a perfect metaphor of the way we are living today.”

“Mi Casa, Your Casa 2.0” is located near Northeastern’s campus, and students have already connected with the installation.

Colette Fritshe, a fourth-year cell and molecular biology major, was struck by the change in the piece’s meaning due to the COVID-19 pandemic.

“I feel like the idea of being stuck at home is kind of coming through … everyone’s just been stuck at home during COVID, but it’s good to kind of get out,” Fritshe said.

“I think it’s interesting how they portray being separate but together at the same time because they’re all spaced out, but you still get that connection,” Issacson said.

But this project wasn’t done by just these two men, Cadena noted that their creative process is extremely collaborative.

“I think our teams are a very important part of what we do,” Cadena said. “It’s not Hector and Ignacio working – it’s a bunch of people that we trust, and we share the same philosophy … it’s a true process of people thinking together, so projects become very organic in the way that they’re alive.”

Ultimately, although Esware said he doesn’t believe in repeating past successes, each iteration of their projects and collaborations means something – even failed ones.

“There’s no wrong answer,” he said. “Those answers, those memories that we archive become eventually the material that can nurture future projects.”

Seaport Boston will donate $1 to Habitat for Humanity for each image of “Mi Casa, Your Casa 2.0” posted with @seaportbos tagged in the image as well as the caption. The installation will be on display until March 14.