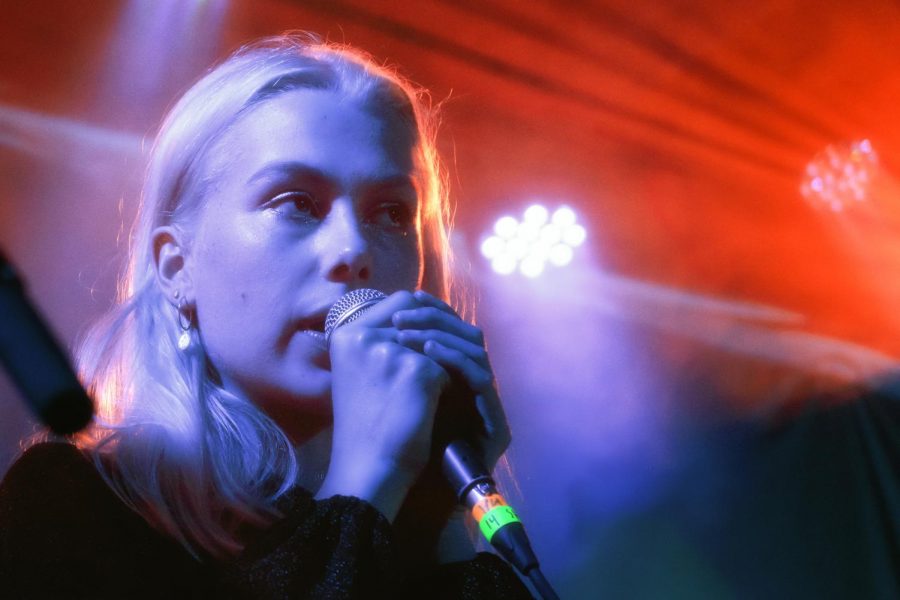 "Phoebe Bridgers" by davidjlee is licensed under CC BY-SA 2.0

Northeastern welcomed singer-songwriter Phoebe Bridgers to its virtual stage Feb. 24 as a surprise event through the Council for University Programs, or CUP, in collaboration with the NU Live Music Association and Green Line Records.

Bridgers’ Northeastern concert was more scaled-down than her usual electric performances. Armed with only her guitar, her webcam and her signature skeleton bodysuit, Bridgers delivered an impressive virtual performance.

Bridgers opened her set with “Kyoto,” followed by the gloomy “Moon Song” and “Chinese Satellite,” finishing her performance with “Motion Sickness” and “I Know the End.”

Northeastern students enthusiastically responded to Bridgers’ performance. The chat feature on Zoom was bursting with Bridgers’ lyrics, crying emojis and even marriage proposals.

Bridgers made her mark on the music scene in the midst of the COVID-19 pandemic, working almost exclusively from home after the June 17 release of Punisher.

“[Working from home] was weird, to say the least,” Bridgers said in the Q&A portion of the evening. “One of my favorite parts was that I got to play late-night shows in my pajamas.”

On Feb. 6, Bridgers safely transitioned to an in-person performance as the musical guest on “Saturday Night Live,” hosted by star of “Schitt’s Creek” Dan Levy. Bridgers jokingly described the experience as “horrific,” saying she felt a loss of control in a live setting.

“I was so used to sending in a video of me playing, controlling everything up to the audio,” Bridgers said. “I’m going to miss that.”

In addition to producing and performing from home, Bridgers also created her own record label, Saddest Factory Records. Bridgers referred to herself as a “music fan as a musician” and created the label in October 2020 to amplify other artists.

“I wanted to bridge the gap between artists I love and the infrastructure that a label provides,” Bridgers said.

Bridgers has released two solo albums — with her debut Stranger in the Alps released in 2017 — but still collaborates in her other musical pursuits. Her indie rock band, boygenius, consists of Bridgers, Lucy Dacus and Julien Baker. The trio has also worked on both of Bridgers’ solo albums.

Bridgers has also collaborated with Conor Oberst under the name “Better Oblivion Community Center” and has been featured on songs by high-profile artists like Kid Cudi and The 1975. In November 2020, Bridgers released a cover of “Iris” by the Goo Goo Dolls with fellow singer-songwriter Maggie Rogers on Bandcamp. The pair donated the proceeds from the duet to Fair Fight, a voting rights organization created by Stacey Abrams.

Despite her collaborations, Bridgers explained, she still enjoys producing her own music.

“The freeing part [of producing solo music] is that I’m the boss,” Bridgers said, “but being in a band humbles me.”

In the Q&A portion, a student asked Bridgers a live question about her Grammy nomination for Best Rock Performance, a category which is made up exclusively of female-fronted artists for the first time in Grammys history.

“Awards shows are never representative of the music scene as a whole, but this means that the world is moving in the right direction,” Bridgers said.

Bridgers also spoke of her beginnings in music. She experimented with different styles of music in high school, which she attended with Grammy-nominated band HAIM. Ultimately it wasn’t easy for Bridgers to cultivate her distinct soft, somber sound, which she described as “trial and error.”

“What nobody tells you is that you have to be bad for a while to be a musician,” Bridgers said.