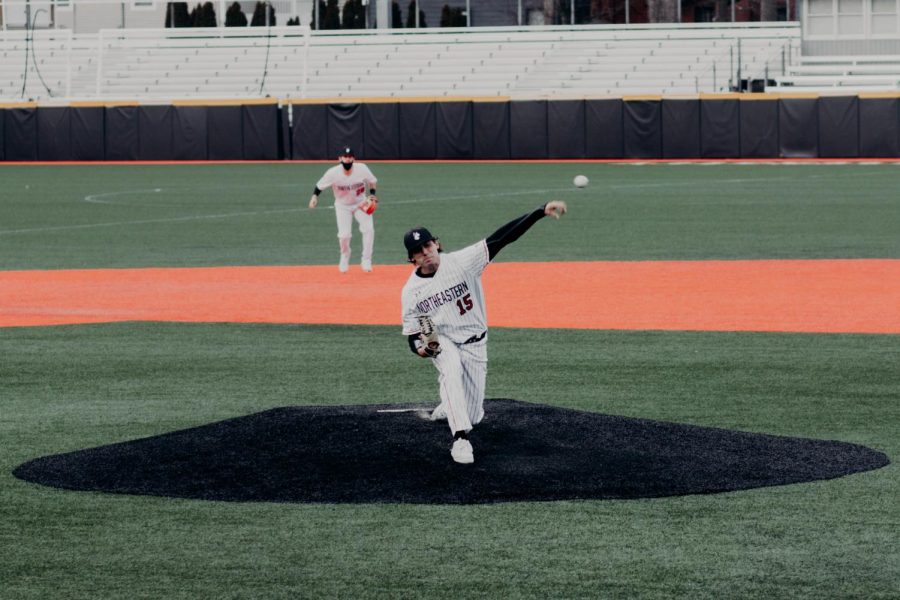 The Northeastern baseball team fell in this weekend's series against Old Dominion University, with a record of 3-4.

Tight games are a baseball postseason staple. Two teams in midseason form going deep into extra innings is a common sight at the end of the season, but in the second weekend of action? That is less common.

The Northeastern Huskies (2-2) made the trip down to Norfolk, Virginia this weekend to play a three game series against the Old Dominion University Monarchs (6-2). The Huskies would come into this series on short rest, having most recently played at home Wednesday against UMass.

Redshirt senior Kyle Murphy was once again Northeastern’s starter Friday. The righty struggled early on, allowing a two-run home run in the bottom of the first. Old Dominion struck again in the third frame, plating a run following a double.

The NU bats stayed hot, putting on a laser show. Redshirt junior Teddy Beaudet had two RBIs off a sacrifice grounder and a sac-fly. Redshirt sophomore Spenser Smith had a strong day at the plate as well, smacking two hits in four at bats, and driving in four runs.

Smith’s second hit came at a big time for the Huskies. In the top of the eighth, Smith singled to drive in two runs. This doubled Northeastern’s lead, and gave them a comfortable cushion going into the penultimate frame.

“We separated,” said Northeastern head coach Mike Glavine. “It was a big hit by Smith, you go from two to four, and you’re feeling really good about yourself.”

However, the good times were fleeting for the Huskies. Redshirt sophomore and reliever Owen Langan got into a jam in the bottom of the eighth and couldn’t pitch out of it. ODU plated three runs and chased Langan out of the game before he could record three outs. Huskies closer and redshirt junior Brandon Dufault came in to close out the game for his team. He couldn’t prevent one of his inherited runners from scoring, and the game was all tied up at eight runs apiece.

Dufault came back out for the bottom of the ninth, and walked the leadoff batter. A sac-bunt and wild pitch later, and that runner was on third base, representing the winning run. Dufault struck out one more, but on a 2-2 pitch with two outs, senior outfielder Kyle Battle hit a two-run home run to send the Huskies home.

“That one hurt,” Glavine said. “We did so many things well, just not enough. That’s the second one where we had an opportunity to win late, and we just gave it away.”

Huskies Hit Back on Saturday

The Huskies got a second chance at victory Saturday afternoon. Redshirt freshman Sebastian Keane kicked things off from the hill for Northeastern. He dealt two scoreless innings before the ODU bats woke up. They exploded for a five-run inning, including a grand slam, cancelling out the two runs the Huskies had put up in the top of the frame. Freshman infielder Max Viera crushed a solo home run in the top of the fourth to bring the Huskies to within two.

“[Keane] was better, but I think there is more in there,” Glavine said. “I don’t think we’ve seen the best of Sebastian this year yet. But he was better, he was in the zone a lot more, I trusted the stuff he was throwing.”

ODU’s pitching was unable to be cracked, as their starter, redshirt junior Nick Pantos, dealt six innings of strong baseball. Redshirt senior Brett Smith relieved Pantos and pitched a scoreless inning of his own, before Freshman Jacob Gomez came in to close out the game. A scoreless top of the eighth was the prelude to a big final effort.

The eighth, ninth and leadoff hitters were due up for the Huskies, and after two at-bats, Gomez found himself in a jam, with runners on the corners and no outs. Smith drove in a run off a fielder’s choice, bringing the Huskies to within a run. Gomez struck out another batter to get within an out of the win, but Dupere had other plans. A two-out, two-run home run gave the Huskies the lead in the top of the ninth. Redshirt freshman Jake Gigliotti came in to close out the game, and faced the minimum to bring it home for Northeastern.

“It was a great win,” Glavine said. “We played a really good game. We just grind, we’re a tough team to pitch against, even when it doesn’t look like it’s going our way.”

The Huskies hit the diamond early Sunday at noon once more. A pitchers duel, Redshirt freshman Cam Schlittler got the ball for the first inning, and it was apparent early on he was sharp. Other than walking in a run with the bases loaded, the right handed hurler was producing at his best. ODU’s junior starter Ryne Moore was also sharp, allowing one run over seven innings pitched. Northeastern had their signature tough at-bats, forcing Moore to pitch a lot more than he probably would have liked. However, the Huskies could not bring any base runners in, stranding 10 on the basepaths by the end of the game.

Each team turned to their bullpen, yet neither offense could put a runner across the plate. The game would remain knotted at one run after nine innings, forcing the game into extras. This season, the CAA introduced new extra-innings rules, including that a runner will be placed at second base at the start of each half inning. This is designed to prevent drawn-out affairs that last into the ‘teens of innings. However, neither team seemed to really get that memo, as it took until the top eleventh inning before Northeastern’s Viera finally brought the baserunner home.

Brandon Dufault took the mound for the bottom half of the inning, but ODU was not ready to call it a game quite yet. They brought their automatic runner in to tie the game at two, then junior catcher Brock Gagliardi hit a walkoff single to clinch victory for the Monarchs.

“It was a tough game but it was a much different game from Friday night,” Glavine said. “Friday night we lost the game, today we battled and they battled.”

The Huskies fell to a losing record of 3-4 after the series, while Old Dominion went five games above .500 with a record of 8-3.

“I thought it was a great series,” Glavine said. “Two walk offs, and one ninth inning home run, unfortunately we didn’t come out on top.”

The Huskies will get a chance to win a series when UMass Lowell comes to Friedman Diamond for a two-game battle next weekend. Before that, Albany will visit Beantown for a one-off game March 9.