Men’s basketball can’t keep up with Drexel, bow out of CAA tournament with semifinal loss 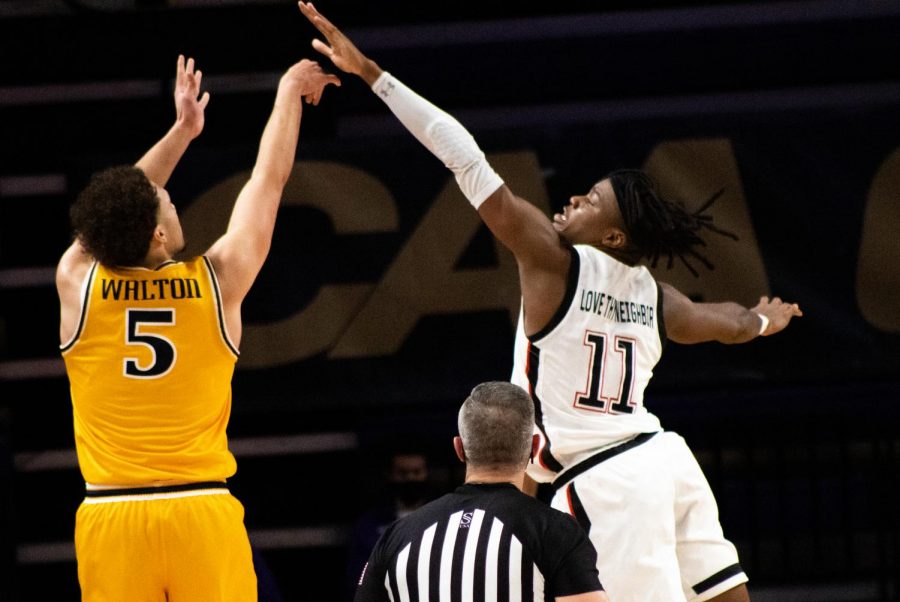 The combination of team scoring and effective rebounding from Drexel ended Jahmyl Telfort and the Huskies' season Monday night.

While freshman forward Jahmyl Telfort scored a career-high 30 points and sophomore guard Tyson Walker finished with 23, the Northeastern men’s basketball team ended their season with a 74-67 loss in the CAA semifinals to the Drexel Dragons.

The No. 6 seed Dragons (11-7, 4-5 CAA) made 52% of their shots from the field and also went 8-for-16 on three-pointers in their march to victory Monday night. The No. 2 seed Huskies, on the other hand, only made 41% of their attempts and shot just 6-of-19 from downtown, which proved to be too little to keep up with the collective effort of Drexel.

The Huskies were shorthanded, coming off a two-week hiatus due to positive COVID-19 tests within the program and were without redshirt junior guard Shaquille Walters. Redshirt junior forward Jason Strong, who sat out Sunday’s win over William & Mary, played limited minutes but did not make a large impact and was clearly not 100%.

Telfort got the Huskies off to a solid start, going strong to the rim and pushing through defenders in order to finish with two points, and then knocking down a three-point bomb in transition to give the Huskies a 7-4 lead early.

NU showed its defensive prowess in the first ten minutes, closely guarding the potent Drexel three-point shooters who knocked down 11 of their 18 tries in their quarterfinal matchup. The Huskies also stole the ball five times early on and gave the Dragons’ ball handlers fits.

Walker and Telfort were too much for the Drexel defenders to handle in the first half, getting to the rim for buckets in the paint in different ways: Telfort with his strength and body, and Walker with some fancy handles and finesse to send the Dragons the other way as he layed in an easy two, giving the Huskies a four-point lead with just under eight minutes to play.

Tyson Walker with the blow by and score at the goal#HowlinHuskies pic.twitter.com/ITHpN1LCMO

Back-to-back threes from the Dragons gave them a two-point lead and the confidence to go on a 12-2 run, forcing Coen to call a timeout with 4:13 to play in the first half as his team fell behind 29-23. The momentum seemed to have shifted to the Huskies’ opponent in a way they had not yet experienced in the CAA tournament.

“You’ve got to give Drexel credit, they came out ready to play,” Telfort said after the game.

The teams traded baskets as the clock wound down, and Huskies’ redshirt sophomore forward Chris Doherty put an offensive rebond back in to cut the Drexel lead to 34-29 at the half. The Dragons got help from every member of their team, as no players finished the half in double digits, but three players had seven each. On the other side of the ball, the Huskies relied heavily on Telfort and Walker, who had 13 and 12 in the first, respectively.

Rebounding proved to be a problem for NU in the first half, as they only grabbed 10 rebounds to the Dragons’ 20. Sophomore forward T.J. Bickerstaff had seven of those boards and graduate student James Butler had five. In order to make a comeback in the second, the Huskies would have to shore up the boards as well as defend the Dragons much better than they did in the first half.

It appeared that the Dragons would stay on fire, however, as they found the gaps in the Husky defense to extend their halftime lead to 11 points four minutes into the half. Walker and Telfort couldn’t answer Drexel’s collective offensive outburst, missing triple after triple and stalling on the offensive end of the floor.

The Huskies tried to turn the tables by turning defense into offense, as freshman forward Coleman Stucke picked off a Drexel pass and finished in transition at the other end to make it a 47-40 game with 13 minutes to play.

The Huskies forced a couple more turnovers after switching from their typical man-to-man defense to a 3-2 zone. Thanks to the solid defensive play, NU was able to climb back into the game. Telfort danced on the three-point line and knocked down a three as the shot clock expired to cut the deficit to one with just over six minutes to play.

Drexel then popped the Huskies’ balloon of hope with a sharp dagger as they figured out the zone and knocked down three straight triples to inflate the lead to 62-54. They found the soft spot in the middle of the defense and kicked the ball to the corners as Butler and sophomore forward Mate Okros hit the treys.

There was still a glimmer of hope for NU, as with over a minute to play, Walker drove baseline and found a wide open sophomore guard Vito Cubrilo, who made a three to make it 64-59 Drexel. Even though the Huskies almost forced a turnover and scored to make the game close, the Dragons made each of their free throws in the final minute and went on to beat the Huskies 74-67.

Telfort’s 30 points are the most of his young career, and he demonstrated his impressive two-way game with his solid defense of Drexel junior guard and All-CAA First Team Honoree Camren Wynter.

“We’re asking our young players to do a lot of things and I think [guarding Wynters] is only going to help [Telfort’s] development,” Coen said. “You see his versatility; he plays four positions for us, he guards multiple positions for us…what I like about him best is the type of young man he is.”

The defensive effort was present for the Huskies as well, as they forced 16 turnovers on the night from the Dragons. Even though Drexel got the win, there is no doubt they had to work for it on the offensive end of the floor.

“Northeastern’s defense depends on how they’re able to really be aggressive with their hands…Coach Coen has built a culture of playing and defending without fouling,” said Drexel head coach Zach Spiker. “They make you earn your points; they don’t give you anything free.”

This loss means that the Huskies’ season is indeed over. Originally projected to finish seventh in the CAA and focused on rebuilding their roster after losing multiple seniors in 2020, they defied plenty of expectations and played high-level basketball during the conference portion of the schedule.

“Whenever it ends, it ends. And it’s like you’re on a treadmill and you’re running about 10 miles an hour and somebody hits the stop button and everything stops,” Coen said. “The thing that doesn’t change at the end of the year is the emotion in the locker room.”

As Drexel moves on to the CAA Championship to face No. 8 seed Elon, the Huskies will look forward to next season and how they can improve in the offseason. As there are no graduating seniors, the team could return at full strength next season barring any transfers.

“There’s a lot of things I’ve got to work on,” Telfort said. “We’re just going to get through this summer and come back ready next season.”