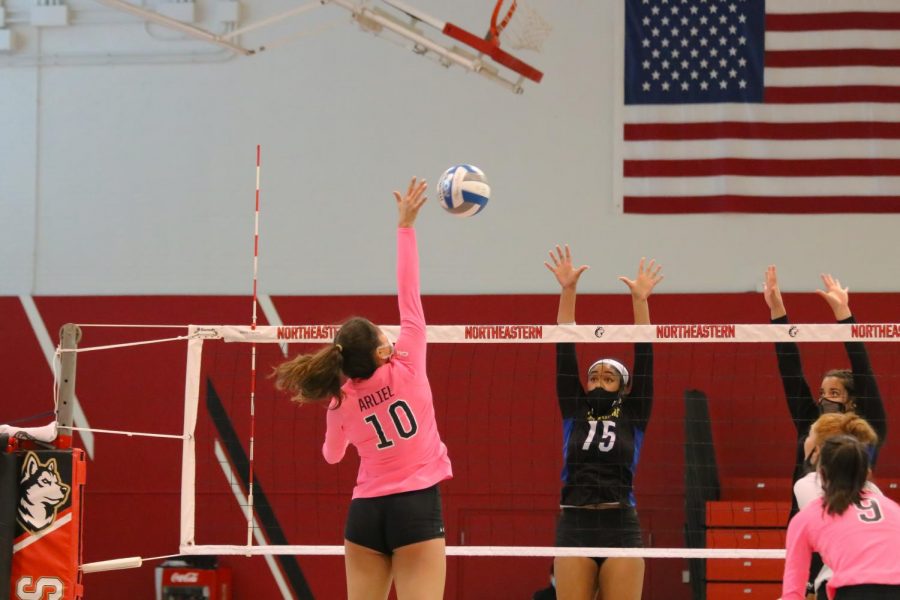 The Huskies split the home-and-away series this weekend with Delaware, making a comeback in Sunday's game with a three-set win.

The Huskies lose their five-game win streak, fall to the Blue Hens

Despite their strong start to the game, the Northeastern Huskies were unable to make their comeback, falling to the Delaware Blue Hens 3-1 Saturday afternoon in the first game of their home-and-home series this weekend. This game was also the Huskies’ Think Pink game, dedicated to raising awareness toward education and fundraising efforts regarding women’s cancers.

The Huskies were coming off a five-game win streak after winning the series against Hofstra University (3-2, 0-2 CAA) last weekend. Also, for the second week in a row, sophomore opposite outside hitter Erica Staunton and sophomore defensive specialist Kayla Martin were named CAA Offensive and Defensive Player of the Week, respectively. However, NU did not anticipate the attack that was to come from Delaware.

“I feel like we were a step behind,” said head coach Lenika Vazquez. “First time playing Delaware this year, different look. People look very different on film, and I think we expected a different team, and Delaware came at us very aggressively, and we just kind of weren’t ready.”

The game began on a strong note for the team as they brought high energy to the court. Freshman outside hitter Defne Arliel led the attack, amassing several points in the first half of the set and cementing it with an ace, giving the Huskies a three-point lead, 9-6. The first set, Arliel hit .700, leading the game by a significant margin with seven kills and six digs. 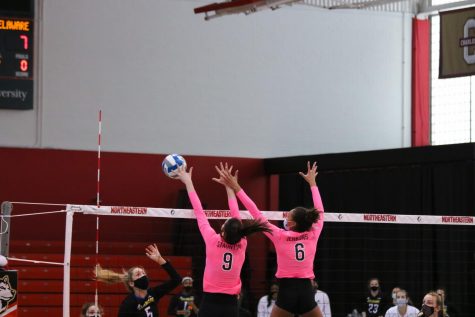 Communication gave the team the cohesion needed to return the strong attack from the Blue Hens, who also matched in their energy on the court. Staunton, as well as sophomore middle blocker Nailah Jenkins, placed several kills within the second half of the set. Even before the ball went over to the Huskies’ side, Jenkins seized the opportunity while the ball was in mid-air, dropping it right into Delaware’s court, giving the Huskies a 6-0 scoring run, 22-15. After a timeout was called by Delaware, Jenkins went back in, this time with an ace, giving them the set point. Senior Samantha Shupe followed with a kill, winning them their first set 25-17.

The Huskies continued to be in good shape after the break as they headed into the second set. A coordinated block by Arliel and Jenkins, followed by a dump shot by sophomore setter Liz Carroll into an empty space, gave them a two point lead, 6-4. After a timeout called by Delaware, Staunton put in a digshot along the net, putting them on a 5-0 scoring run. However, that was quickly shut down with a quick dump shot by sophomore setter Ezgi Basaranlar.

The Blue Hens quickly caught up, landing several kills into the Huskies’ court. Another surprise dump shot by Basaranlar forced NU to take a timeout as the two teams neared the match point, NU just short one point of Delaware. In the end, it was Delaware that took the last point, ending the set 23-25.

Set three was a change in pace for the Huskies as the Blue Hens pecked away point after point, racking up several scoring runs. The NU front row put up a good defense, blocking several spike attempts by Delaware, but their ball seemed to get caught up in the net as they were unable to get a grasp of their first contact.

“If we can get a better first contact, we’ll be able to run our offense, and that’s where we struggled today,” Vazquez said. “That first contact was difficult. They weren’t always very good so that took us out of our element.”

However, the Huskies were not done as they returned to the court for their fourth set to determine whether they would be able to go onto a fifth set to make a comeback. The Blue Hens also came back onto the court to secure another set with lots of energy. An ace by Staunton, closely followed by a quick kill by Jenkins that Delaware could not keep under control, brought the two teams to 8-8.

A 5-0 scoring run by Delaware in the second half stalled NU slightly as they took a timeout, but gained back their momentum, bringing the score difference up to two, 17-19. Despite their effort, they were unable to catch up in the final minutes as two kills by freshman outside hitter Savannah Seemans brought Delaware to their match point before Staunton’s kill attempt was blocked by Augier and freshman setter Lily Rogers, bringing the set to a close, 19-25.

Northeastern came back to the court Sunday afternoon to face Delaware once again, but this time understanding their opponents play a lot better, anticipating their attacks.

“We know what they were going to change for today, so we just adjusted ourselves very well,” Arliel said. 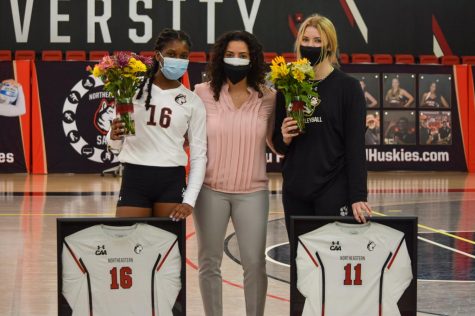 “The seniors are like the coaches in the team without the coaches. We all love them a lot, they are like our big sisters,” Arliel said. “They are a good inspiration for all of us.”

The set started off on a high note for the Huskies, gaining a 4-1 lead in the first few minutes. For the first half, they seemed to keep Delaware at an arm’s length, with kills from Jenkins, Staunton, Daphnis and Arliel. On the other side of the court, the Blue Hens worked hard to return the ball, with Savannah Seemans leading in both attacks and receiving the ball. In another 4-0 scoring run, the front row, consisting of Jenkins, Staunton and Shupe, blocked two kill attempts in a row, giving NU the lead 16-13.

Shupe continued to gain momentum and, while the Blue Hens were distracted by the ball that was dug by Arliel, Shupe snuck in a dig shot, placing it right in the middle of the court. Later, a clean set by Shupe gave Jenkins the momentum to score the set point for the Huskies, 24-19. Delaware fought back with a kill by redshirt junior outside hitter Michaela Putnicki in the back corner that forced NU to go into timeout to recollect before claiming the win for this set. It was a close call for the Huskies as Jenkins finished off the set with a strong kill, 25-23.

The Huskies blasted out into the second set on a 5-0 scoring run, with Arliel and Jenkins going in for spikes while Martin held the defensive end, catching the incoming attacks from Delaware. Staunton amassed three kills in a row for the Huskies as well, seizing all opportunities possible to get in a spike. A strong block by Jenkins and Arliel, placing the ball straight down back into the Delaware court, gave them a seven point lead, 14-7. 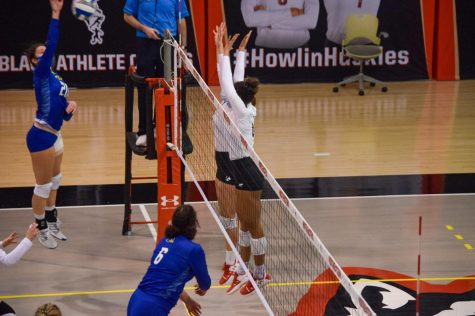 The Blue Hens could not match the intensity and momentum of the Huskies as NU continued to both attack and block the ball from entering their court. Jenkins brought the team to set point in a surprise kill after the ball fell right into the other side of the net before Staunton cemented the win with a cross court kill, 25-15.

Arliel brought a strong attack in the third set with several block assists and kills, and NU seemed eager to take home this set to avenge their loss from yesterday. The front row power duo that is Jenkins and Arliel totalled three block assists in the set, not letting the ball get past to their side of the net. In the end, Delaware went on a 4-0 scoring run but it wasn’t enough to catch up to the Huskies after having made several errors, as Shupe and Staunton got in the last kills to secure the set and game, 25-16.

Jenkins matched her season-high eight blocks, hitting .667 over the three sets. Arliel also came off with a double-double, getting 12 kills and 11 digs. Compared to Saturday’s match, Coach Vazquez thought the Huskies were in much better shape.

“The message was focus on our half, make sure we’re doing the little things to be successful and that will transfer into big plays,” Vazquez said.

The Huskies will travel to Maryland to face their next opponent, currently unbeaten Towson (4-0, 2-0 CAA), in a week’s time.