Q&A: Buttke-Galinkin slate, running uncontested, wants to transform SGA from the inside 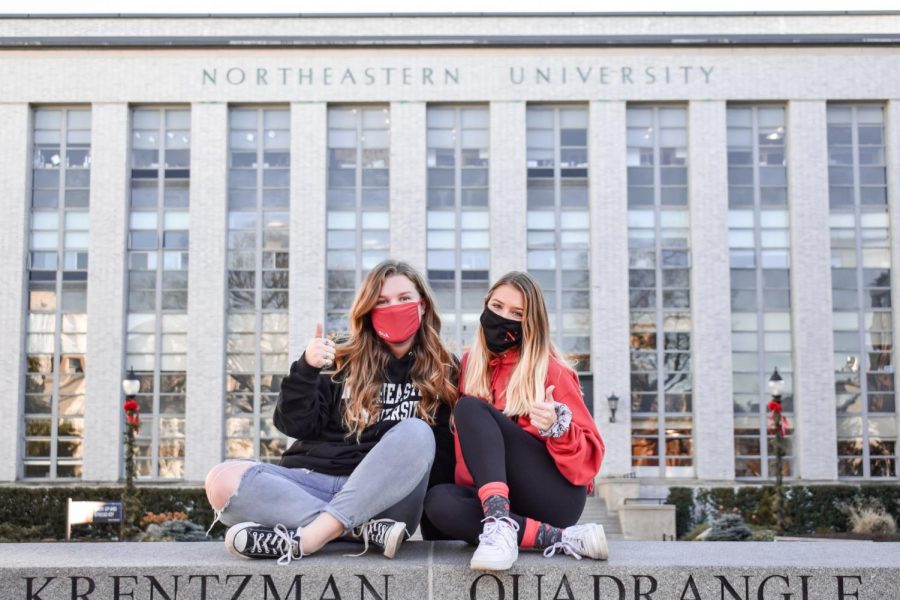 For three years in a row, Student Government Association elections have presented Northeastern students with a binary choice between only a single slate of candidates or a vote of no confidence.

This year is no different. But Casey Buttke and Izzy Galinkin, nominated for student body president and executive vice president respectively, say they have a pitch for students who are considering a no-confidence vote. Buttke directed her campaign volunteers to give a simple answer when faced with students who say they don’t like Student Government Association, or SGA: “We don’t either.”

The pair hope to catch students’ attention in the election, held on the Student Hub March 14 to 22 at 3 p.m., with a platform that focuses on collaboration with existing student advocacy groups, responsiveness to student feedback and facilitation of dialogue between students and university administrators.

Buttke is a third-year criminal justice and political science major from Toronto, Canada, who currently serves as SGA’s chief of staff. She’s also part of Northeastern’s peer tutoring program, a member of Sigma Kappa Omega and a peer mentor for first-year students in the NU Start program.

The News spoke to each candidate this weekend about why they’re running, what students can expect from them and how they think SGA leaders should be held accountable. The transcript below has been edited for length, clarity and organization. Each candidate’s answers have been tagged with their initials.

Why are you running? What made you want to do this?

CB: I’ve been chief of staff for two years, and I really missed the advocacy side of SGA. That’s why I got involved in student government to begin with. Chief of staff is definitely very administrative and more process-focused, and I wanted to get back to doing the work that motivated me to join student government in the first place. Beyond that, I have gotten very used to the procedures within SGA, and I’ve developed a lot of problems with the procedures within SGA. I think that there are a lot of things that could be done better to use our platform on campus to amplify student activism.

IG: I joined when I was a freshman, my first semester, and I just really loved the idea of advocacy. My main intention in student government is to be able to take the issues and questions that students have and to turn them into initiatives to help them out. I really enjoyed that, and I want to kind of do it on a bigger scale, so when Casey asked me to run with her I was extremely excited for the opportunity.

What distinguishes your slate from SGA campaigns in past years?

IG: In the past, a lot of the candidates for this role have done a great job as far as building connections with administration, but what’s different about [our] campaign is that we want to focus on the students more. We have three main pillars that we’re focusing on, the first one being SGA reform. And this is what I think really sets us apart, because I think for the first time, the candidates, Casey and I, really feel that there are some changes that need to be made internally in SGA before anything else can happen. We need to reformat SGA from the inside so that it can meet those goals.

It seems like the majority of the action items on your platform are oriented to reform the way SGA works and interacts with campus communities, whereas slates in past years have set priorities that have a specific, direct impact on students. Is there a reason you’re aiming your campaign in that direction?

CB: SGA is a platform for student advocacy. That is what it should be. That is what it was designed to be. I think that right now, that’s not how SGA is functioning. So, as much as there are things that are incredibly important to me in terms of my personal advocacy — like, one thing that comes to mind is I think that communication between mental health resources on campus needs to be improved — the whole core of our platform is ‘Power to the Pack.’ I think that creating the space for more student-initiated advocacy is 10 times more important than any list of projects that Izzy and I could come up with.

IG: If we’re not able to support the students and work with them and have a good working relationship with them, then none of the initiatives are going to get done, and that’s kind of the biggest problem. We think that by starting with that goal of just restructuring SGA so that it can be more supportive of students, then we can really look to get more projects done. We don’t want to present the projects as much as we want students to come to us with projects. There’s so many great student leaders on campus, and we want to hear from them.

Casey, there are some students who worry about your candidacy because of your position as chief of staff under former SGA President Chris Brown, who has been accused on various occasions of racism and misogyny. What was your relationship with Brown, and how did you handle those questions?

CB: I think it is incredibly important to hold people accountable in your life, whether they’re friends, but especially if they’re co-workers and especially if they’re people who do have a position of power. If you have their listening ears, that is your responsibility to hold them accountable to what they say. One instance comes to mind where there had been a couple discussions among the women in Cabinet where we were realizing that [Brown] was not talking to us the way he was talking to our male counterparts, and I would say that this was even more noticeable with the women of color in Cabinet. It got to a point where, in [a Cabinet meeting], I just looked at him and I said, ‘Chris, I don’t think you’re aware that you’re doing this, but you need to know the impact that your tone and your words and your behavior are having, because it needs to stop.’ I am very confident in speaking out against people that I work with if I don’t agree with what they’re doing.

In a recent article, The News detailed accusations from students that SGA’s rejection of a community COVID-19 testing referendum was “racist” and “classist.” As a result of their public comments on the issue being circulated on social media, some SGA senators received threats of violence. Going forward, in situations similar to that, how do you feel you can thread the needle between accountability and safety for SGA senators?

CB: I’m not convinced that there’s going to be a one-size-fits-all solution to things like this. I think it is incredibly important to myself and to Izzy that transparency and accountability is absolutely present within SGA. We are accountable to our constituents. The press being involved with SGA is something that is of utmost importance. When it comes to Senator safety, I think a lot of factors played into what happened. I think one of them is that people don’t like SGA, so any opportunity to attack senators like that is easy to take up, especially when it’s online. The first step is really encouraging active, lively discussion with full respect for each other’s opinions and [recognizing] that we all come from different backgrounds and different perspectives and that’s part of debate. And we should be welcoming that, as opposed to creating arguments or things like that.

IG: We don’t want to limit anything that [senators] say, but we do need to educate them. We do want to take steps immediately, and we’ve already been talking about it in [SGA] leadership to have a training program for our new senators to make sure that they understand that everything that they say is public knowledge and information that can be posted in the media. One other thing we wanted to make sure, and this was part of the goal with kind of developing a better relationship with campus media organizations, is that senator’s words aren’t being misconstrued in any way. We do want to make sure that we have a person for that. Our executive director of communications, whoever it might be in the next following years — we want to make sure they have a really good relationship with these media sources.

The reasoning for a lot of students’ mistrust of SGA is that they don’t feel it has enough power to actually get things done. Referendum questions or pieces of legislation will be passed by a large majority, and when they’re brought to the administration, they just don’t do anything about it. Do you have an answer for students who are skeptical as to what SGA is actually able to do?

CB: One of the first things that I want to do if I get elected into office is to have a sit-down with upper level administration at the university, and say, ‘Where’s the disconnect? Why are these student movements getting ignored?’ SGA makes a lot of concessions procedurally to how the administration wants things done when it comes to referenda specifically. All of those concessions were made by past SGA administrations because there was a promise that those procedures would allow and encourage the administration to take those referenda seriously. But it’s clear that that isn’t working. There have been a lot of [pieces of legislation] that have been adjusted because of something someone in administration said, again with the promise of, ‘Oh, well, if you change this wording, then we will back this and we’ll be comfortable with this.’ At a certain point we are not going to keep making these concessions if [administrators are] not holding up [their] end of the bargain.

IG: In the past, it’s been just a conversation between SGA and administration [after students pass a referendum], and then, like you said, nothing really happens from there. So what we’d like to do is possibly create a position just for referenda involvement. Another thing we’d like to do is invite the authors and supporters of the legislation and the referenda to actually meet with us with [administrators] because we think that will hold the administration more accountable to actually put in these initiatives.

In past elections, students’ distaste for SGA has brought no-confidence votes up as high as 39 percent. What’s your pitch for students who are planning to follow that path this year?

IG: What sets us apart this year is that we recognize the faults within SGA and we are willing to go in and make those changes. So, if students are voting no confidence because they have a problem with SGA, we want them to know that there is change coming, because I think we’re the first slate in a few years to really recognize those problems.

CB: What we told our campaign workers is, if anyone comes up to you tabling and says, ‘I’m voting no confidence because I don’t like SGA,’ the response should be, ‘We don’t either.’ Because right now it’s not working for the students. I think that has been made abundantly clear by failed referenda, by failed legislation, by the fact that the last three student body elections have been uncontested. At the end of the day, I completely understand the drive to vote no confidence, because one candidate is not a democracy. But on the other hand, I think that right now the system is broken, and I truly believe that I have the knowledge and the skills and the drive to make serious steps towards fixing it.

This story was updated 1 p.m. March 18 to reflect changes to the election schedule.