CHAARG empowers students to take charge of their wellness 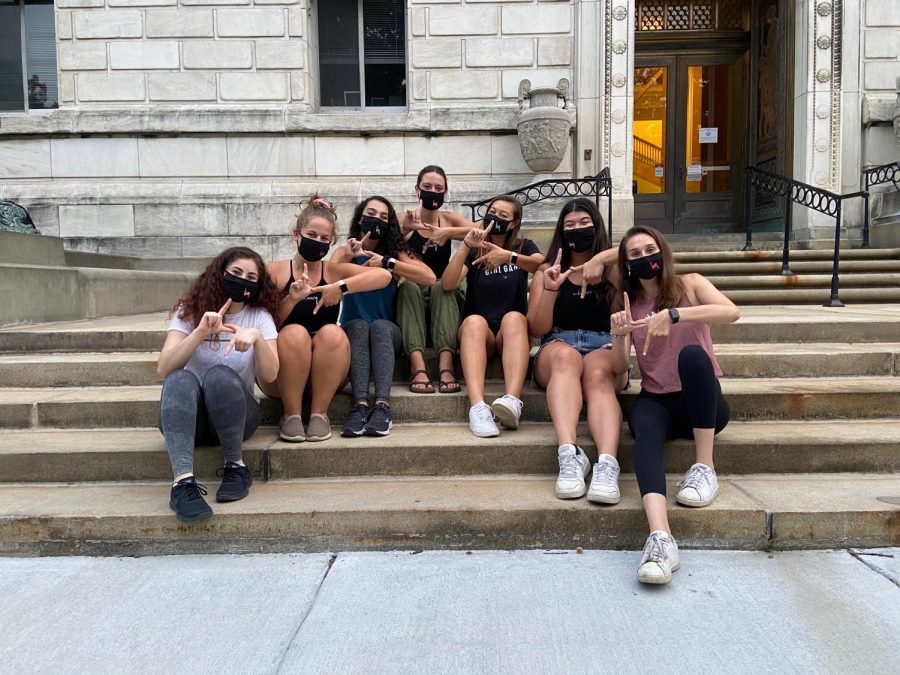 Changing Health, Attitudes, + Actions To Recreate Girls, or CHAARG, is a women’s fitness group that recruited 120 members in its first semester at Northeastern. The student organization hosts weekly workouts (some in-person, some virtual) and small group events as well as a biweekly running group. According to the national organization, its central mission statement is to “liberate girls from the elliptical” and show women that fitness is something that can be enjoyable.

CHAARG is a national organization, which started at The Ohio State University in 2012. There are now 105 chapters of CHAARG across the country, with the NU chapter joining its ranks in the fall of 2019, started by Avery Collard, a third-year psychology major and lifelong athlete.

“When I came to Northeastern, I was coming out of being a two-sport varsity athlete in high school,” Collard said. “I had always had a really strong athletic community around me, and that’s kind of how I structured my life.”

But when she arrived at NU, she found there wasn’t a group that could replace the kind of kinship she felt with her teammates. She had joined a club sports team and a sorority but couldn’t find her community  — until she stumbled upon CHAARG.

“It looked like a fitness sorority for lack of a better word, essentially it was a community at college campuses all across the country geared toward empowering women to find their fit,” she said. “That essentially means finding what makes them happy and healthy in their own body and for their mind.”

Upon founding the NU chapter, she took part in a nine-week training program through the national CHAARG organization, which assisted her in finding her group for the executive board. As of spring 2021, CHAARG at NU currently has 175 members. CHAARG representatives said they welcome people of all gender identities to join if they’re interested in finding their fit.

Collard explained the cost is $52 per semester where $42 goes to the national chapter of CHAARG, and $10 goes to the NU chapter. Furthermore, if a prospective member cannot pay the amount, CHAARG has a “wellness/accessibility fund” that students can apply for. The national organization handles all these transactions and applications.

Audrey Murdock, a third-year international relations major, attended the most CHAARG events last month out of all its members. When talking about her experience joining the organization, she said she initially joined for the cost-efficiency.

“I joined because it’s a deal, and I stayed because of the people,” she said. “It’s also obviously proven working out in college and just having a supportive community and healthy lifestyle really just helps in all sorts of aspects.”

Murdock found herself willing to be bolder and stand up for herself in her personal life after drawing inspiration from members like Collard, she said.

“It’s definitely empowering just to be surrounded by a strong female community,” Murdock said.  “It’s navigating not only the problems that you face in college, but as a woman and having people [be] your support group through everything.”

Nicole Victory, a second-year business administration major, considered joining CHAARG but found herself both too busy and wanting to make her workouts more personalized.

“So far I’ve tried to make my workout schedules for myself and sometimes it’s hard for me to commit to, on a weekly basis, at this day, at this time, you’re going to be doing this workout — because I need a lot of flexibility with my workouts,” Victory said.

CHAARG also utilizes social media to normalize talking about fitness in a way that doesn’t include harmful messages about women’s bodies. Every member is encouraged to use the hashtag #neuCHAARG or create their own CHAARG Instagram to document their journey with fitness.

“You can scroll through and see everyone’s personal blog about their health and wellness journey and how they’re feeling — which is a great way to kind of connect with people,” Collard said.

In the midst of the COVID-19 pandemic, CHAARG ran workouts online, which allowed all members to attend virtually. They also facilitated small group workouts outdoors with visiting instructors from local studios for their weekly meetings.

As COVID-19 vaccinations roll out across the country, CHAARG will be able to accommodate more members in studios for their weekly workouts. Collard said she’s specifically excited to get all her members crammed into a spin class studio, sweating it out together.

Nicole Abbatinne, a second-year biology major and vice president of membership at CHAARG, said she is looking forward to how CHAARG will change in the coming semesters and how their community will be able to grow even more at NU.