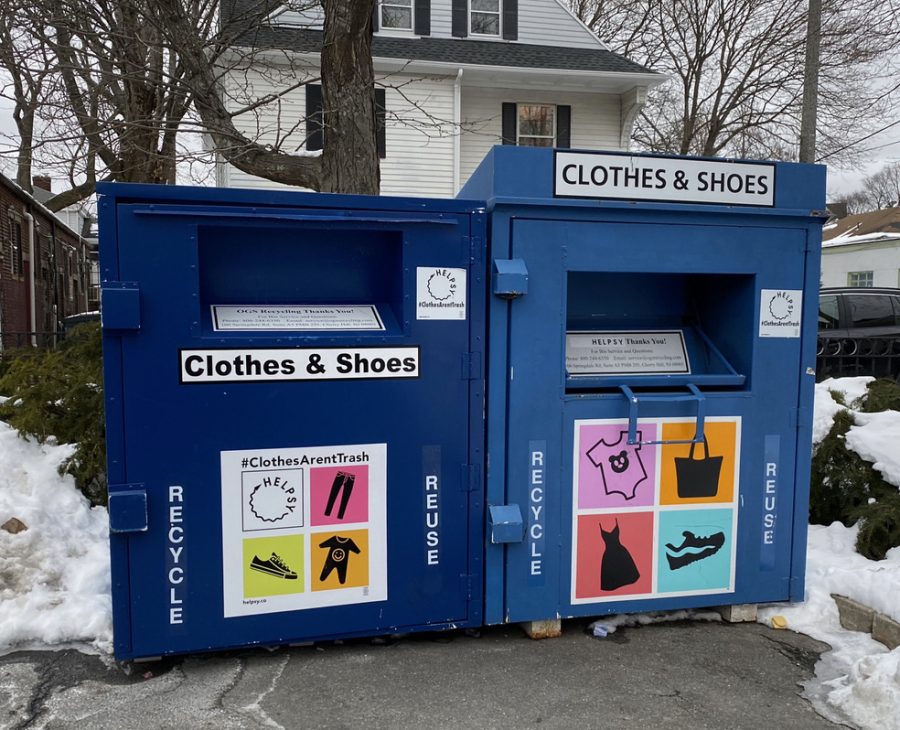 The Helpsy clothing donation bins in Jamaica Plains offer community members another way — aside from thrift stores and landfills — to dispose of their old clothes.

Founded in 2017 by three childhood best friends, Helpsy aims to keep textiles out of landfills in order to reduce carbon footprints. Last winter, Helpsy won a competition hosted by the city of Boston in which companies submitted proposals for city-wide textile collection programs.

According to the city of Boston, textiles make up 7% of solid waste and can be expensive and carbon-heavy to process. Helpsy proposed utilizing a combination of city-wide collection bins and curbside pickups to keep clothes out of landfills, focusing on making clothing donations easy and convenient.

Dan Green, one of Helpsy’s founders, said he and his partners initially started Helpsy because of an entrepreneurial drive, not an interest in waste reduction. However, after buying out and combining a variety of small companies and parts of larger companies to form Helpsy, Green has become deeply passionate about waste reduction, especially when it comes to textiles.

“I was originally interested in buying a company because I wanted to run a company in what I think of as the right way,” Green said. “When we stumbled on these clothing collection companies, we really got a sense of their environmental impact.”

After employees collect donated clothing, the majority of textiles are given to thrift stores. Clothes that are deemed as unwearable are either turned into cleaning rags or filling used in construction, such as for insulation.

“The life of an item of clothing typically ends because the consumer decides to throw it in the trash, it doesn’t typically end because it’s worn out,” Green said.

The city of Boston was interested in a textile donation program since it has become increasingly expensive, in addition to environmentally harmful, to process trash and recyclables. According to BBC News, 85% of clothing in the United States is thrown away, either to be put in a landfill or burned. Each pound of donations prevents 38 pounds of carbon dioxide from being emitted, Green said.

Boston’s superintendent of waste reduction, Brian Coughlin, said that partnering with Helpsy will save significant taxpayer money as the city will spend less on processing and recycling waste.

“Recycling is not cheap, we’re not getting rebates and credits like we were getting in 2017, and prior to that,” Coughlin said. “So there’s other things we need to come up with and start making some changes to the operation. If we can do that and also be more environmentally aware of what’s going on, that’s a win also.”

While the program’s most immediate impact is the attention given to environmentally-sound waste management, there are also other widespread benefits.

“It potentially is going to spark economic growth through job creation and there could be some need for infrastructure for the city as well, which would create more jobs,” Coughlin said.

The project has exceeded expectations in terms of the amount of clothing collected since October.

“As of right now I feel like [the textile waste program] has been successful, I really do,” Coughlin said. “We’re getting some really good numbers. Each location on average is producing almost 1,000 pounds per month. That’s far more than I expected it to be. As we add locations, hopefully that same volume will come in.”

Green thinks the pandemic has contributed to the program’s unexpected success.

“We are seeing a big increase as people have been stuck at home and are buying more online,” he said. “Online stuff tends to generate more returns and is also more painful to return, so we’re getting a lot of material that people bought online, don’t want anymore and just drop in our bins.”

Community members are taking notice of the clothing donation bins and have been using them out of convenience.

“I tell myself I’m going to go to Goodwill, then I drive around with [old clothes and] then dump them at [the Jamaica Plain] bin, so I end up using [Helpsy’s bins],” said South End resident Jessica Amador.

While some still choose to donate their clothes at second-hand stores such as Goodwill, Savers and the Salvation Army, there is a consensus that the collection bins experience significant traffic.

“[The clothing donation bin] has only been there for a few weeks, maybe a month or so, and it seems to be pretty full every time I see it,” said Jamaica Plain resident Pete Papadopoulos, who personally chooses to take his used clothes to Savers.

Helpsy has also been pleasantly surprised by the frequency at which clothing collection bins are visited.

“Some of our bins are busy enough that our drivers will encounter multiple people dropping off clothes while they’re servicing the bins,” Green said.

Green and Coughlin expect to add an option of curbside pickup to the textile donation program in the spring to make it even more accessible and convenient for residents. As of late February, Helpsy collected over 100,000 pounds of clothing in Boston.

“The overall story is a good story. It’s not going to the trash dump,” Coughlin said. “It’s not being collected by workers and put in the back of a truck. It’s going to other places and putting other people to work, so it’s a great story for the city.”