Op-ed: To honor everything we’ve been through in the past year, continue to take COVID-19 seriously 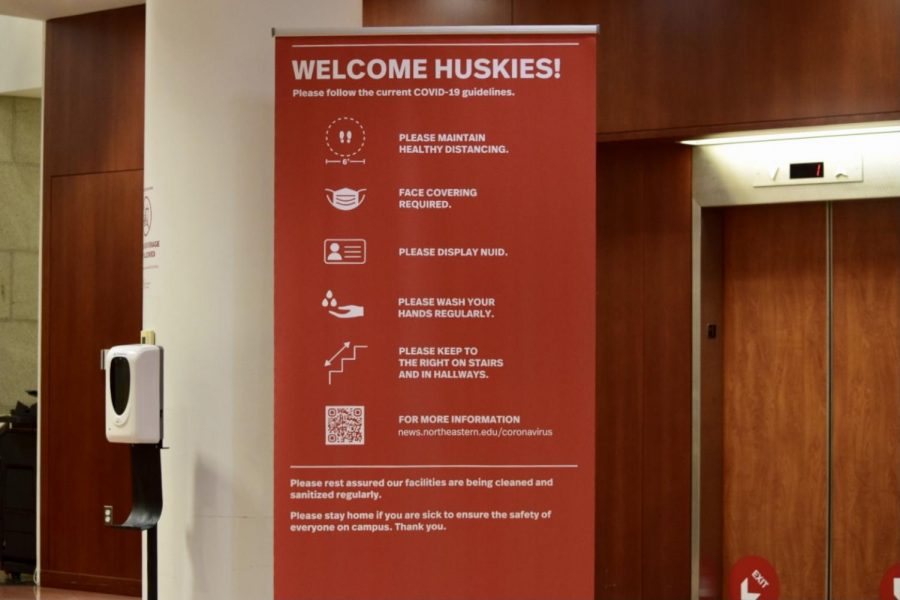 Signs around campus inform students of how to slow the spread of COVID-19.

It’s been about one year since the rapid spread of the coronavirus was officially declared a pandemic by the World Health Organization March 11, 2020. Massachusetts had just six confirmed and 95 presumptive cases of what was then called SARS-CoV-2, and Boston recently learned that it unknowingly played host to an international superspreading event. At Northeastern, students just returned from spring break and were transitioning to online classes. A few days later, the university would be hustling students out of on-campus housing.

A lot has changed since then. Over the last chaotic, heartbreaking, stressful and occasionally hopeful 12 months, we’ve learned a great deal. Suddenly we all know big, science-y words like “inoculated” and “comorbidity.” A year ago, if people knew Pfizer, it was probably because of Viagra or Xanax. Moderna was a place where your STEM friends completed their co-op. Johnson & Johnson was just ‘the family company.’ If you’re a Northeastern student who spent the last year on or near campus, you’ve probably stuck a Q-tip up your nose over 50 times, and you’ve probably made awkward eye contact with someone you kind of know from class while swabbing your nose about half of those times.

Over the last year, we’ve also endured almost unfathomable loss. Over 500,000 people in the United States have died from COVID-19, more than the number of U.S. casualties in Vietnam, Korea and World War II combined. Early research also suggests that the social isolation brought on by the pandemic took a significant mental and emotional toll on much of the U.S. population. A June 2020 survey conducted by the Center for Disease Control and Prevention found that 40% of respondents had symptoms of anxiety, depression or increased substance use, and over 10% said they seriously considered suicide in the preceding month. In 2018, only 4% had seriously considered suicide for the entire year.

People also lost jobs, homes and businesses. Conor Larkin’s, the Huntington Avenue bar that was frequented by Northeastern students and alumni looking for a casual, any-night-of-the-week beer or two, was forced to shut its doors in June. Although it’s a tiny loss in the sea of huge, unbearable losses, I’ll miss the trivia nights,the bingo nights and the $5 pitchers of mystery beer — not just for me, but for the generations of students who never got to experience it.

Of course, people gained a lot of new skills and took up new hobbies too. Some people picked up the guitar again or completed thousand piece puzzles, while others learned how to bake bread from scratch or broke their personal record for hours logged on TikTok. And there was the tie-dye. So much tie-dye.

We also got new music across the board from Juice WRLD, to Lady Gaga, to Bruce Springsteen, to Dua Lipa. Taylor Swift dropped two (Two!) new albums, and Rihanna has gotten really, really close to maybe possibly dropping one too. On TV, we became obsessed with tigers, money laundering, Michael Jordan and Steve Kornacki.

Some things didn’t age well — Quibi, Andrew Cuomo, Trump’s twitter account, the food your roommate left in the fridge when she left to quarantine at home for four months. Other things got an unanticipated revival — chess, Joe Biden, sweatpants/shirts/suits.

It’s been almost a year, and we’ve all gone through it all together, apart. However, it’s crucial we remember that it’s not over yet. Recently, Texas Governor Greg Abbott announced that he would be lifting the state’s mask mandate and allowing businesses to open at 100% capacity, a move that has public health officials worried, especially as new variants of the virus emerge. At the time of Abbott’s announcement, more than 6,000 Texans had COVID-19. More than 1,700 of those were doing so in intensive care units.

A post-pandemic world seems to be inching closer every day, but we need to continue to care about the pandemic the way we did a year ago. If we do, maybe a year from now — maybe sooner, even — we’ll be back, elbow to elbow, drinking from the same $5 pitcher.

Kelly Garrity is a fourth-year political science major. She can be reached at [email protected]