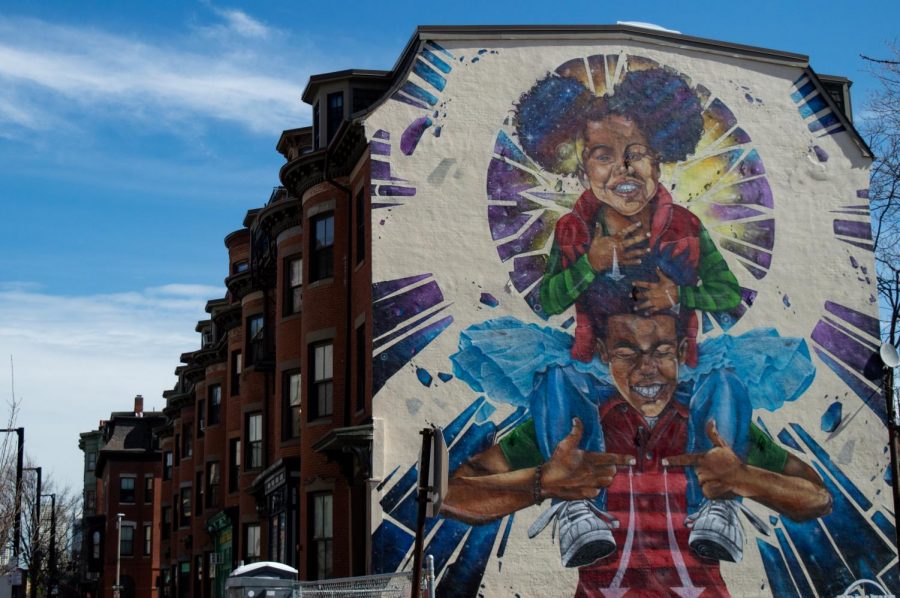 “Breathe Life 3,” a Roxbury mural by Rob “ProBlak” Gibbs, showcases the talent and vision of just one of many Bostonian creatives of color.

Although art has long served as a medium for expression and advocacy, artists and creatives of color are often disregarded when considering what racial justice might mean to themselves and their communities in Boston. Radical Imagination for Racial Justice, or RIRJ, a new three-year renewable grant initiative established by the Surdna Foundation’s Thriving Cultures Program, seeks to combat this by providing funds to support creatives of color.

The program aims to fund up to 260 projects around the country, working with a variety of partners such as organizations that serve Latinx and Indigenous communities, those that seek to address inequalities in the distribution of art grants and local arts nonprofits.

RIRJ’s program coordinator Perpetual Hayfron said that of the 11 partners selected by the Surdna Foundation for this three-year national initiative, the Massachusetts College of Art and Design and the City of Boston’s Mayor’s Office of Arts and Culture are the only municipality and higher-education institution to receive this funding. The $1.2 million award has been used to make ten $1,000 grants and six $40,000 grants to artists using their work to imagine and share their vision for a racially-just Boston.

“A lot of art grants in Boston are awarded to the same group of people,” Hayfron said. “Through this program, we aim to change the artistic landscape in Boston and increase access to this funding in the arts for people of color, specifically.”

Hayfron said that racism experienced by people of color in Boston extends to every sector of society.

“The racism in Boston is disguised in so many oppressive, backhanded practices. We see it in housing, transportation and also within art. Art grant practices are deeply rooted in language that is oppressive and not accessible to people of color,” Hayfron said. “Purposefully and intentionally aiming this grant at ALAANA+ [African, Latinx, Asian, Arab, Native American, etc.] and BIPOC communities is so important because they are often overlooked, and if they are included, they are exploited.”

Lily Xie, one of six artists receiving a $40,000 grant, said the arts have a central role in education; it not only allows people to know, but also to feel what communities are experiencing.

Xie said her project “Washing” is a multimedia art project created alongside four Chinatown residents about the legacy of the two highways in Chinatown.

“At the time [the highways] were built in the 50s and 60s, they caused a big physical and emotional scar on the neighborhood, displacing so many families and residents [who] were not given an option about whether they wanted these highways in their neighborhood,” Xie said. “The project seeks to explain how it feels today to be living near the highways and the side effects such as air pollution, limited space, traffic.”

“Washing” will consist of interviews and videos with residents of Chinatown. The project will culminate in a projection event in Chinatown, Boston in June 2021 in the last publicly-owned lot in the area, Parcel R-1.

“In Chinatown, there is always development happening. It is important for people to know what the consequences of development can be,” Xie said. “The highways are a big source of emissions and particles that can cause asthma and cardiovascular disease. The same is true for large apartment buildings that are always being planned. We want to remind people that there are people living in Chinatown and that their lives matter.”

Over 300 applications were reviewed by community-based panels consisting of individuals of color with different backgrounds and ages. Aside from the requirements of being residents of Massachusetts, at least 14 years old and creatives of color who live and/or work in Boston, projects were evaluated for their vision for justice, ability to impact Boston by December 2021 and collaboration with the community.

“The majority of [the community-based panelists] were a huge part of building RIRJ, with our advisory group consisting of people from all over Boston who work in different fields and within the arts,” Hayfron said. “They were able to tell us what they saw in the city and what they felt was needed when rolling out RIRJ. We also did this with our Street Team, with our youth.”

The Street Team, comprised of individuals between 14 and 24 years old, was tasked with ensuring young people at least 14 years of age were aware of the opportunity to participate and apply to RIRJ.

“Young people are the future,”  Hayfron said. “The youth are integral to keeping [RIRJ’s] work going forward. We want to see projects that are cultivated now but that can be sustained in the city 10 years later, because [their work] will become what we also call Boston history.”

RIRJ asks that artists dedicate a minimum of 20% of their budgets to some element of well-being. Hayfron said that this is done to encourage artists to take care of themselves as they complete their work.

“The humanity of our grant recipients comes first,” she said. “There is no art without them, so we need to make sure that their hearts are well, that they are nourished, that they have the energy to do this work not only for this grant, but for themselves.”

The opening celebration for the inaugural cohort of artists was held Jan. 22, 2021, and a closing ceremony will be held in December 2021. During this time, grant recipients will be expected to participate in gatherings with each other to share their projects, cultivate fellowship and discuss racial justice in Boston.

The range of projects in RIRJ’s inaugural cohort is a testament to the diverse changes Boston creatives envision for the future. Christine Alcindor, a recipient of a $1,000 grant, hopes to increase understanding of the Black experience and express the strength, joy, pride and beauty in the Black community through her painted mural project, “The Beauty of Black Life.”

Adobo-Fish-Sauce, consisting of Anthony Febo and Ricky Orng, will use their $40,000 grant to tell the stories of youth in Boston using poetry and cooking, encouraging them to create pieces that honor their cultural identities and promote cross-cultural engagement with their communities.

As this is the pilot year for RIRJ, Hayfron anticipates the program to potentially take different forms in future years. Whether this means reevaluating what another cohort of artists would look like or something entirely different, RIRJ hopes to support Boston’s creatives of color in furthering racial justice now and in the future through their community-collaborated projects.