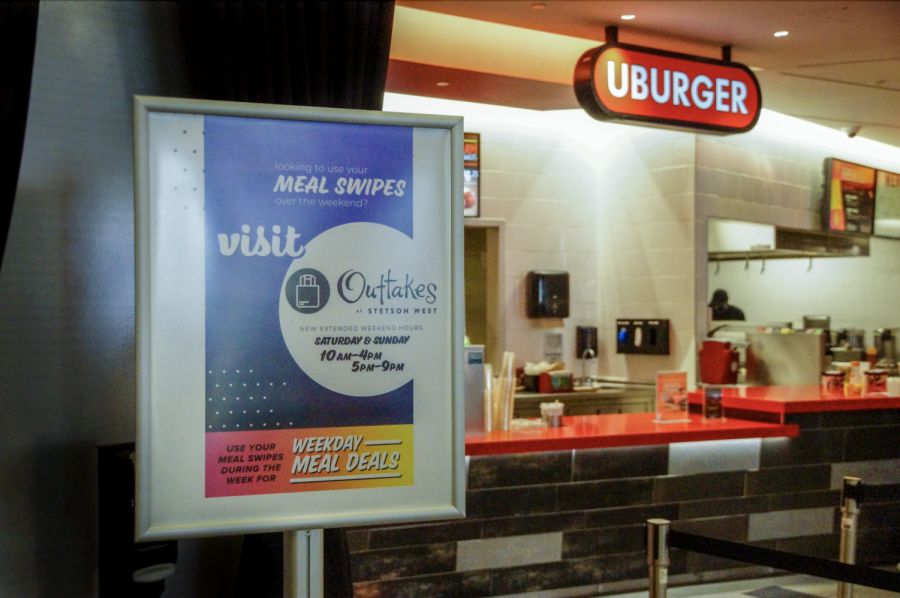 Starting March 5, meal exchanges are only available during the week in Curry Student Center.

After Northeastern Dining reevaluated the systems that had been in place since the start of the fall semester, starting March 5 students were confronted with changes to dining hours and meal exchange locations.

Changes included limiting the use of meal swipes at Curry Student Center to weekdays only, extended weekend hours at Outtakes and the closure of Outtakes on Mondays and Tuesdays.

These changes come after Northeastern announced its intent to return to a normal campus experience next fall, and Timmons said the changes are part of an effort to get back to normal.

According to a letter posted by Northeastern Dining, the changes are due to a decrease in demand for the increased meal exchange options and expanded hours that were implemented in the fall.

“After carefully assessing our students’ current demand and the level of utilization of our services, we are adjusting our meal offerings and hours of operation at some of our campus locations to begin returning to the original, pre-pandemic options,” the letter read.

For first-year Khalin Kapoor, who is in the Explore Program, the changes to hours at Stetson West, or Outtakes, will make it harder to get food quickly. Kapoor said his schedule includes morning classes followed immediately by two more classes, leaving little time to do anything in between.

“Usually, if I have food in my dorm — like I get these oatmeal things — I eat those before class if need be. If I don’t have any, then I just don’t eat anything or I have an orange or something because I have those in my fridge,” Kapoor said. “It would be better if I [didn’t] have to buy the orange and all those things and just get the food from the dining plan.”

Ryan Chaput, a first-year computer engineering and computer science combined major, lives in Stetson West and said he will miss the ease of walking down a few flights of stairs and having access to Outtakes every day.

“Now it’s going to take me longer to get either lunch or dinner, and often when I go to eat during the week, I’m trying to get something quick,” Chaput said. “Now I’m gonna have to go to either Levine [Marketplace], which usually has a long line or even [International Village], which is like a 10 minute walk there and back.”

The convenience that Outtakes and other meal exchange locations afforded students during first semester is not the norm; Timmons said the pandemic forced dining to reevaluate previous systems last year and make changes.

“We added some additional changes in the fall because we were not exactly sure what was going to happen, with the pandemic and all these different things. We added additional meal exchange locations, we added take out to the dining halls, we just weren’t sure what to expect,” Timmons said.

Vice President of Finance and Assistant Treasurer Alysa Gerlach, who oversees Northeastern Dining, said the changes enacted in early March were motivated by looking at guest counts. Chartwells Catering, the company that helps manage dining at NU, records hourly guest counts that can be used to analyze patterns and make changes as necessary.

Gerlach said members of Northeastern Dining collaborated with data scientists last summer to figure out how dining could function efficiently and safely in the pandemic, and that they will likely collaborate again this summer as the dining department looks towards the fall 2021 semester.

As first-years, Kapoor and Chaput are required to be on the university meal plan. Kapoor said his experiences during the fall semester and the beginning of spring semester were relatively positive, but he still hopes he won’t have a meal plan next year, in part due to the changes in hours and meal availability.

“It was convenient, and, also, they have snacks and stuff, so I could just do a swipe and then just get a bunch of snacks and then keep them in my room and eat them wherever I want,” Kapoor said. “Across the street from me is the dining hall, so I would just go there whenever I wanted, but it was just easier beforehand.”

Chaput said he finds it “unacceptable that they’re not even opening the dining halls for three meals a day, every day,” and the most recent changes are influencing his plans for next year.

“I’m trying to get an apartment with a kitchen next year so I don’t have to be there because my experience this semester and last has not been satisfactory at all,” Chaput said.

Though Timmons said she understands that the changes are “a bit disruptive,” she said that they were made to follow state guidelines and maximize service.

“You still have all the options. It’s just that on the weekends it’s at Stetson West or [International Village] or [Stetson] East,” Timmons said. “It’s not that there aren’t options. There are just different options. During the week there are a lot more than we have ever had.”

This year has been unprecedented in a number of ways, and Timmons said it feels like dining has “been pivoting it seems like every day for about a year.”