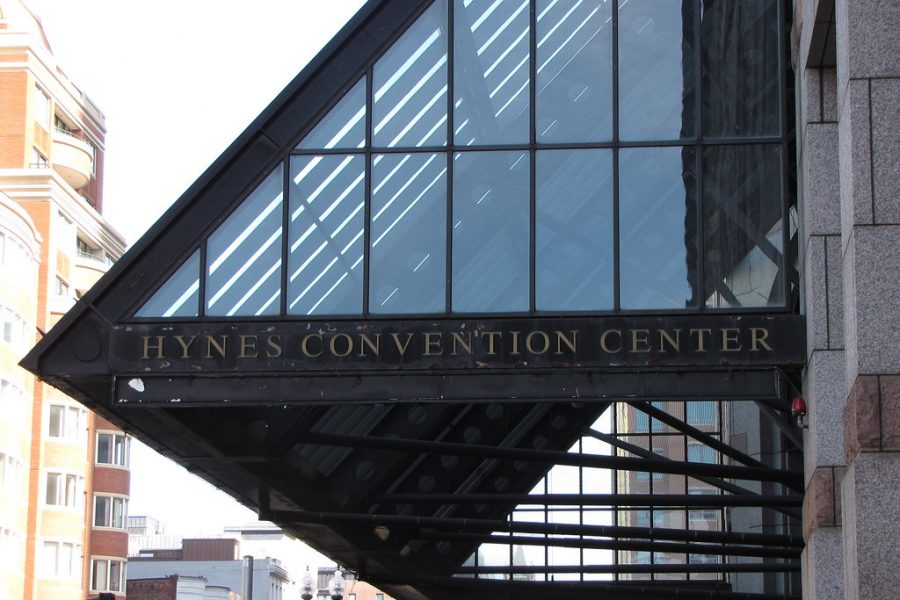 "Hynes Convention Center" by euthman is licensed under CC BY-SA 2.0

Hynes Convention Center is one of the Commonwealth's seven mass vaccination locations.

While Massachusetts is ranked sixth in the nation by Becker’s Hospital Review — as of March 26 — for best vaccine distribution, this success comes after months of struggle. The Commonwealth has faced issues facilitating vaccine appointment sign-ups. Residents hope the state’s new pre-registration website will mediate the less-than-organized system once the general public is eligible for vaccinations come Phase 3, which will launch April 19.

Ann Pappas, a physical therapist who was vaccinated in January at Gillette Stadium in Foxborough, Mass., said the current system will not work for elderly or immunocompromised residents. While her experience was easy because of her physical abilities, the expectation that patients can stand in the cold for extended periods of time in order to get vaccinated will have to be adjusted.

“If you’re a healthcare worker, it is assumed that you can get out of your car, stand in front of Gillette Stadium in the cold for maybe 15 or 20 minutes just to get in because they’re calling you by groups,” Pappas said. “Then you get called in, you give them your healthcare card, your insurance card and your professional license. Then, you kind of go through this line, and the whole thing took me about 45 minutes. It’s probably not a situation that would work for the general public because you’re standing. I’m thinking elderly people and people who can’t stand for up to an hour maybe, and some people say a little longer, it depends what kind of day.”

Like Pappas, Jess Rosenthal — a volunteer at Lawrence General Hospital who was vaccinated March 17 — is worried about the chaos vaccinating the general public will bring. Although she does not work directly with COVID-19 vaccinations, Rosenthal volunteers in the hospital’s clinic, checking patients in and showing them where to go to get vaccinated. While Rosenthal has noticed the first two phases have had their busy periods at vaccination centers, she said it has been manageable thus far. However, she worries about Lawrence General Hospital not having the capacity to vaccinate the general public come Phase 3.

“They’re [going to] have to expand to a few other locations just because right now, it seems a little chaotic and we’re not even in Phase 3 yet,” Rosenthal said. “I know that they’re looking for a lot more volunteers because they anticipate it to get a lot crazier. So, I do not see it staying as organized and as somewhat quiet as it was.”

In addition to healthcare professionals like Pappas and volunteers like Rosenthal, first responders and those who work in long-term care facilities and congregate care settings were eligible to be vaccinated in Phase 1. The Commonwealth prepared for this phase to last from December 2020 to February 2021, but the volume of citizens looking to be vaccinated at mass distribution sites has been lower than expected.

“I’m kind of at the end of Phase 1; I’m one of the last bullet points as a non-COVID-facing healthcare worker, so the good news was to me that they got to that bullet point faster than they said. They were talking about starting my group in early February, but I was able to get it [Jan. 21],” Pappas said. “I could have gotten it even earlier, but I was sort of like, ‘Oh I don’t want to take someone’s spot,’ but at the same time, what I kept hearing in the news was that there’s an abundance of vaccines and people were not taking these spots.”

In Phase 2 — which began Feb. 1 — individuals over 75, then those with two or more comorbidities, then individuals over 65, and finally those with one co-morbidity including asthma will be eligible for vaccination. Massachusetts predicts that come April 19, the rest of the population — or Phase 3 — can be vaccinated.

Although these predictions provide residents some guidance, a disorganized approach to scheduling appointments has contributed to the Commonwealth’s initially low ranking in vaccine distribution — ranking at 31 in January.

State Sen. Diana DiZoglio has been working with other lawmakers in the Commonwealth to pass a bill that will provide citizens with a pre-registration platform to supplement the anticipated disorganized Phase 3. DiZoglio emphasized the state’s lack of a one-stop-shop for vaccine appointments has been frustrating, especially because other states have been utilizing a vaccination roll-out platform created by a company based out of Burlington, MA.

“West Virginia is using a Massachusetts company … to run their system of pre-registration, Everbridge,” DiZoglio said amid Phase 2. “It is beyond unacceptable that we haven’t yet begun to explore this as an option when we have these resources right here who have for weeks been being drafted to other states for their vaccine rollout.”

DiZoglio also shared how some Massachusetts towns and cities took matters into their own hands throughout Phases 1 and 2, creating their own scheduling platforms. The senator believes it is unfair to place the burden of COVID-19 relief onto communities and that vaccine distribution is something that the state should have a firmer grasp on.

“Cohasset and Hingham — we have communities in the Commonwealth that have already begun pre-registration. It shouldn’t be incumbent on cities and towns to establish these types of systems,” DiZoglio said. “The Commonwealth of Massachusetts receives the vaccine and decides how it is distributed, so it should be on the Commonwealth to institute a fair distribution.”

After three months of distribution, Massachusetts has created a pre-registration site in anticipation of Phase 3. Citizens can pre-register for their vaccination and secure an appointment at one of the Commonwealth’s seven mass vaccination locations: Gillette Stadium, Fenway Park (now located at the Hynes Convention Center as of March 27), the Reggie Lewis Center, the DoubleTree Hotel in Danvers, the Natick Mall, the Eastfield Mall in Springfield and the Former Circuit City in Dartmouth.

While the current system has worked for the smaller demographic of Phase 1 and 2 patients, accommodating a larger volume of citizens including those who are not as able-bodied compared to front-line workers contributes to how it will not suffice for vaccinating the general public.

“I am calling on the governor to take swift action on this measure,” DiZiglio said.