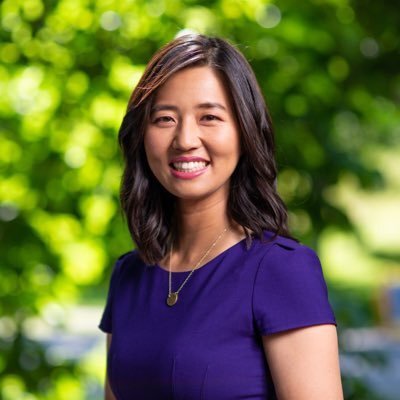 If elected as Boston's next mayor in November, Wu will focus on early education, food justice and development reforms, as well as implementing a Boston Green New Deal.

Boston mayoral candidate and City Councilor Michelle Wu held her second press conference for students March 16. She addressed why she’s running, how she feels about the growing candidate pool, why visual representation matters and what her first move will be if she’s elected in November.

Part of what motivated Wu to run for mayor is her belief that there is no challenge that can’t be addressed by local government.

Wu said that during her time as city councilor, she’s made national waves with precedent-setting legislation regarding paid family and medical leave. She has also pushed legislation ensuring that all city forms and licenses have inclusive language, that — although less dramatic — can make a big difference to those visiting City Hall.

“Knowing that city government is a place where you can do sweeping things, like set a national precedent for protecting workers’ rights and supporting working families, to guaranteeing that every person who walks in the doors of City Hall and has a short interaction — sometimes one that’s taken for granted — [and ensuring] that [the experience] is fully welcoming and inclusive, that’s what I love about city government,” Wu said.

When Wu launched her campaign in September, she was the first candidate to enter the race. Since then, her City Council colleagues Andrea Campbell and Annissa Essaibi George have joined, as have Massachusetts State Rep. Jon Santiago and Boston’s former chief of economic development John Barros. Dorchester resident and former hotel manager Dana Depelteau has also filed papers with the state to enter the race. However, Wu isn’t put off by the competition.

“We were the first campaign to launch because it wasn’t ever about who else would be running or running against anyone for that matter,” she said. “It’s about this moment in Boston and taking every possible action to empower communities.”

The race is shaping up to be the most diverse in Boston’s history — three of the candidates are women and five are people of color. Wu, a first-generation Taiwanese American, highlighted the importance of this diversity.

“I can’t remember the first time that I thought I might run for office, but I have lots of childhood memories where that was never, ever, ever in the realm of possibility,” Wu said. “The thought never crossed my mind until I was much, much older in law school working on the Warren campaign and it was, I think, related to the fact [that] I didn’t see anyone who looked like me in positions of leadership or government.”

Wu also noted the importance of gender diversity and talked about how being a working mother when she first joined the City Council in 2014 allowed her to make connections with constituents during her push for paid family and medical leave.

“As I was doing by my job, going to community meetings as a pregnant councilor, constituents would come up to me and share their stories of how hard it was to juggle going back to work with a new baby without any sort of paid leave,” she said. “I became a connection point for so many people who hadn’t seen that representation in government.”

If Wu is elected, some of her first objectives will include implementing a Boston Green New Deal as well as early education, food justice and development reforms.

“We have the potential to be a city that is welcoming to everyone,” she said. “We have the resources, we have the activism, we have the ideas to be that city, but it’s not reflected in the experiences of Bostonians who have been shut out of decision making, of generational wealth, of carrying the burden of the pandemic, and we see communities really walled off from each other by geography and by neighborhood as well. So I come with a drive to make sure that we are building a city that everybody feels reflected in and welcome in.”