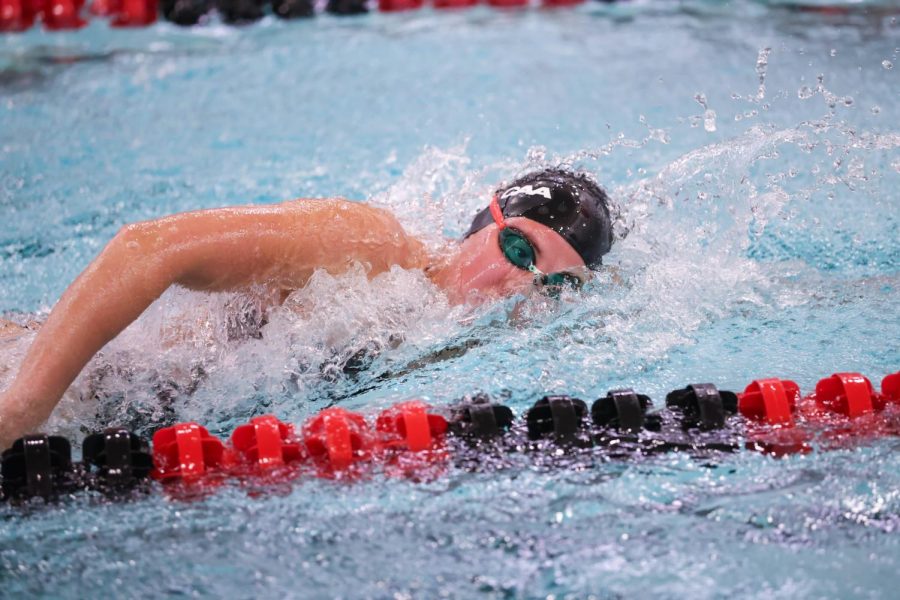 Senior Swedish swimmer Matilda Weiler is one of the approximately 100 international student-athletes in the Northeastern athletics program.

For Swedish senior swimmer Matilda Weiler, it was an easy choice to decide to pursue swimming in college in the United States. From the get-go, she was enrolled in an athletic high school in her hometown of Helsingborg, Sweden, where she trained and competed on the national level. All of this led up to Weiler transitioning to collegiate swimming in the United States, since there are no college athletics in Swedish universities.

“Swimming in America has always been a dream,” Weiler said.

There are many athletes like Weiler who envision coming to the United States to play at the collegiate level — for many, it serves as a pipeline to professionally pursue their sport in the future. The number of international students who seek this opportunity is growing every year.

“We love having international student-athletes,” said Regina Sullivan, Northeastern’s deputy athletics director. “It adds an element of diversity, and it adds a breadth and depth to the experience. The choice they make [to come to the United States] is intentional, so they tend to be very committed in the classroom and other ways.”

For Weiler, Northeastern and its education was also an important factor in deciding to pursue swimming in the United States.

“It helped me to know what I wanted to focus on because for me, the actual school has always been important to me as well,” she said. “It was important to find a school where I can thrive academically as well as in athletics.

Other Northeastern international student-athletes have also echoed this sentiment.

“I chose Northeastern also for the education, and I knew it when I was coming here,” said French junior hockey player Chloé Aurard. “I knew the support system was amazing because I was talking to the coaches and the upperclassmen.”

For Aurard, the decision to play ice hockey in college came naturally as she was first recruited during the 2019 IIHF women’s world championships in Germany where she was playing for the French national team as well as during her high school career at Vermont Academy. Playing in national tournaments helped Aurard get noticed by U.S. recruiters.

For Quirin Emanga, German-raised sophomore basketball player, the connections were vital in his decision to enter collegiate basketball. As part of his German basketball team, Emanga first came to the United States in 2014-15 to play in a tournament. The team’s coach, who was American, was one of the big connections he utilized to get recruited by U.S colleges.

“I was always amazed by college sports and college basketball overall and the sports culture in the United States,” he said. “But the initial spark [for recruitment] can be kind of difficult to get.”

Sullivan, who serves as the sports administrator for most of the NU athletics teams, said that Northeastern coaches sometimes travel overseas to national championships or tournaments to recruit international student-athletes. However, there are fewer opportunities overall for these athletes compared to those in the United States.

The lack of ability to travel due to the COVID-19 pandemic has further reduced the number of chances available for coaches to scout athletes. It has also posed many challenges for international student-athletes already enrolled in the NU athletics program. Weiler decided to return to campus only after learning that the women’s swim and dive team would hold practice in person in Fall 2020.

Other international student-athletes were unable to return home completely during this time. The last time Aurard was able to go back home to her family in France was December 2019. However, Aurard has been in the United States for seven years and being away from family has helped her during this time, she said.

For the entire summer and even the beginning of the fall semester, it was uncertain how the athletics program would function with COVID-19. As a result, the NU athletics department supported both international and domestic student-athletes’ decision to stay at home or return to campus.

“I think there were a lot of bumps on the road this entire year, a lot of unknowns,” Sullivan said. “We got more answers as we went through the summer and the fall but we also had more questions as the year went along. We did the best we could do to be advocates, to be of support and be of help.”