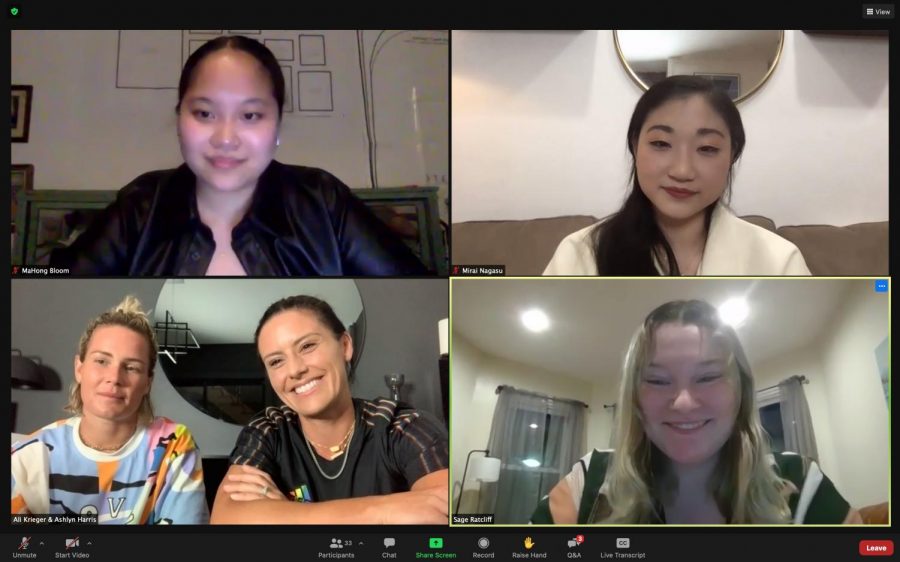 With the 2020 Olympics just under a month away, the Northeastern’s Council for University Programs, or CUP, hosted a virtual Q&A June 18 with Olympians Ali Krieger, Ashlyn Harris and Mirai Nagasu.

Harris and Krieger are best known for their talent on the United States Women’s National Team and Orlando Pride. As a goalkeeper, Harris was the youngest starter at the 2002 U19 Women’s World Cup and Krieger is a two-time World Cup champion with 108 appearances for the United States. The two are married and continue to dominate the field with the Orlando Pride in the National Women’s Soccer League, or NWSL.

Nagasu is an Olympic figure skater, known for being the first American woman to land a triple axel at the 2018 Olympic Games. Recently retired, Nagasu continues to skate and coach in Boston.

During the Q&A, Northeastern student-athletes were eager to hear how the Olympians cope with health issues and mental hurdles.

“What we do is not who we are, we are not defined by our sport. We are humans; we are people,” Harris said. “If you want to have fun and have a little balance in your life, I think that’s a really good thing.”

As a retired athlete, Nagasu offered some perspective about life after sport.

“I think I’m falling in love with skating all over again,” Nagasu said. “I’m doing triple [axels] for no other reason than the fact that I like it.”

Like many athletes, the pandemic had a profound impact on Kriger and Harris, who were attempting to stay in shape for the Tokyo Summer Olympics. The event, however, was eventually postponed to 2021.

“We were thinking we were preparing for the Olympics, and that was really important for us because we had done so many years of preparation, just sitting around was not even an option,” Harris said. “It was hard during that time to find motivation.”

Nagasu, on the other hand, recently retired, had a different pandemic experience. She spent the majority of her time on her couch in her Boston apartment.

“My hobby that I picked up during quarantine that I’m still obsessed with is video gaming,” Nagasu said. “I play Brawlhalla religiously.”

Harris, Krieger and Nagasu are also known for their advocacy outside of their sport.

Harris and Krieger have been outspoken about recent anti-transgender sport bans in Florida and have expressed their support for the Black Lives Matter movement. Nagasu is an advocate for mental health awareness and Asian Americans and Pacific Islanders, or AAPI, as a result of the increase in hate crimes against AAPI individuals.