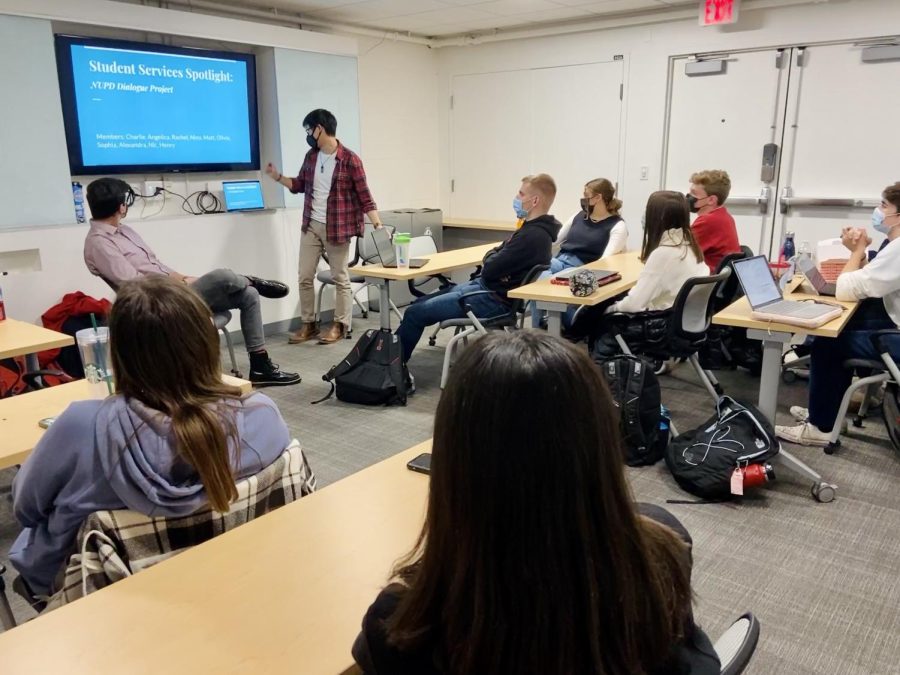 As the committee in the Student Government Association, or SGA, responsible for improving the life of all students, Student Services has often been the driving force behind projects ranging from housing, dining, Husky cards and campus medical and mental health services. Now, the Student Services committee members have also recently started an open and consistent dialogue with the Northeastern University Police Department, or NUPD through conversations and open senate meetings available to the student body.

“We are working with the NUPD and community engagement officers to form a dialogue with student representatives, SGA members and the student body as a whole,” Zhang said. “The ultimate goal is for students to more easily address concerns with the NUPD administration, while promoting student safety and resources.”

The Student Government Association is acting as an intermediary between the Northeastern student body and NUPD. The Students Services committee’s role is twofold: building foundational relationships with NUPD and presenting this information to student groups to facilitate dialogue. For example, one goal is answering the wide range of doubts students have regarding medical amnesty (the  right to seek medical assistance for an alcohol or other drug-related emergency without being subject to disciplinary action) and how it can be utilized.

“We want to answer pretty much any sort of question or concern that students have in order to promote mutually beneficial relationships for both sides,” Zhang said. “It’s especially important for addressing questions regarding cultural competency and racial disparity and arrests around our campus.”

This project started last year as a response to the widespread protests against police brutality across the United States. Sebastian Chavez, vice president for Student Services and a third-year industrial engineering and political science combined major, said that witnessing racial injustice among the police force created a sense of distrust that has echoed across campus. Chavez also said that after seeing this reaction, the committee decided to try to further open communication with NUPD in hopes of building a connection.

“Ultimately, the NUPD can’t do their job if Northeastern students don’t trust them to do their job. And there’s a very valid concern to have lost that trust,” Chavez said. “It’s something that we wanted to try and help regain for the benefit of both NUPD and students on campus.”

When asked about progress made, both committee members said NUPD officers have been open and eager to have challenging conversations with the students and strengthen this relationship.

Staff Sergeant John Farrell, head of the Community Engagement unit at NUPD, explained how this project can be viewed as one of many ways to create experiences where there is potential for discussions to take place.

“It would be an opportunity for engagement. And engagement is the bedrock of our department,” Farrell said. “We feel that in order for our community to be a safe, secure and more trusting environment between NUPD and the people that we’re sworn to serve, there should be meaningful engagement.”

One of the challenges the Student Services committee has encountered so far is managing to successfully represent many different cultural communities to the NUPD. To overcome this obstacle, the committee is collaborating with other student organizations on campus, such as the Sexual Assault Response Coalition, or SARC, to expand knowledge of its resources.

“It’s not just that we’re going to be working with SARC or cultural groups on campus. It’s more about the fact that if we could try to work with a little bit of each of these groups to try and cater to these different communities, their different experiences and the different questions or concerns that they might have, then I think that’s ultimately our goal,” Chavez said. “So any of those groups that are willing to reach out to us and they’re willing to like work with us and we will be reaching out as well.”

Individual students wanting to voice their complaints to the NUPD can directly contact the police department or ask for help from Student Services. When asked about how effective this new initiative would be in causing change, Chavez said that although SGA has no administrative power, acting upon these complaints is crucial for NUPD.

“If there’s certainly criticism or concern about how we handle anything, as those who are called to protect and serve the community — we listen and if change needs to happen, so be it,” Farrell said.

The senate meeting scheduled for Nov. 15 will address this initiative. Senate meetings are always open to all students and take place at 7 p.m..

Farrell said he was hopeful about how having students back on campus can help tremendously in building a stronger relationship. He mentioned events like community resource dog Cooper’s first birthday and giving out s’mores and hot chocolate as past opportunities for NUPD to not only increase awareness about the resources they offer but also to connect with the students again.

“I think good things are happening, and [NUPD] should embrace an opportunity like SGA is providing to have a conversation, answer questions and find out what people are concerned about …what they’re considering, what their fears are and what they like about what we do,” Farrell said.