Review: ‘Antlers’ is a creature flick bogged down by drama 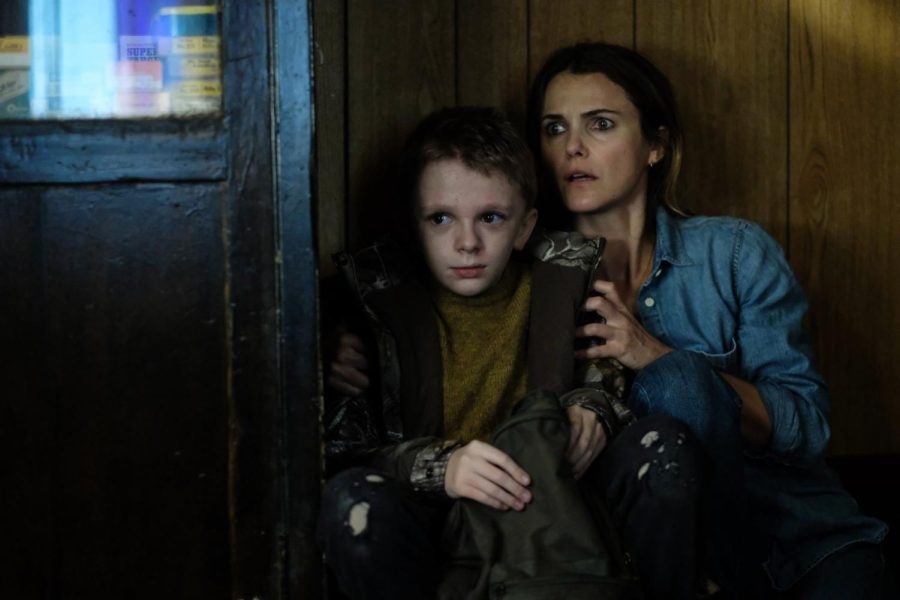 Both Cooper and del Toro’s influences are clear. The overhanging misery characteristic of a desolate, dried-up mining town is brought into real terror by a monster that looks so brutal, the camera can’t help but linger. “Antlers” tries to tell a story by combining a terrifying, unrealistic creature with realistic themes of abuse, but rather than having these themes play off one another, they both fall flat.

Based on the short story “The Quiet Boy” by Nick Antosca, schoolteacher Jules (Keri Russell) returns to a desolate Oregon town to live with her sheriff brother, Paul (Jesse Plemons). Jules’s past abuse from her father is hinted at with stilted conversation and discomfort in her childhood home. 12-year-old student Lucas (Jeremy T. Thomas) tells a twisted version of a fairytale in class, and Jules discovers his notebook covered with dark, gory drawings. The first act of the film takes us slowly through the theme of generational trauma as Jules attempts to help Lucas escape the abuse he suffers at the hands of his father.

Suddenly, the gore fest begins as the monster, clawing, banging and groaning at a latched door in Lucas’s home, is able to burst out. The film carries on at a breakneck pace as the creature, once Lucas’s father and now turned into a Wendigo—a cannibalistic monster of Native American folklore—tears its way through several of the towns’ residents. As it bumpily abandons its attempt to be a drama, “Antlers” also falls short of a satisfying monster flick.

Several messages are presented and then abandoned in the film as it tries to pull deeper meaning from an otherwise simple story. Alongside themes of familial abuse, the school principal (Amy Madigan) offhandedly mentions the poor kids left behind by society, a message the film never attempts to reconcile.

A stone-faced Native American man (Graham Greene) implies that ancestral spirits are upset that their land was taken, before disappearing from the film after reciting an explanation of Wendigos. Paul’s own on-screen development toward his father’s abuse is cut down to him once shakily telling Jules that she “has no idea what he put me through” before the scene cuts away. For those looking for drama, “Antlers” struggles to tie off any of the narrative threads it awkwardly weaves together.

Despite its narrative bumps, Cooper is able to create a horror-appropriate sense of foreboding from start to finish. For a town laced with poverty and addiction, exemplified by a bread line shuffling along next to an ice cream parlor, a real, everyday horror lies in generational trauma. Characters are trapped in one way or another — for Jules, in trauma, for Lucas and his family, in a dingy, rotting house, and for others, in the town itself. Characters are often trapped by the frame between dark doorframes, windows, walls or mine shafts, making the atmosphere weigh down on viewers as well.

Once the monster pounces to the forefront in the second half of “Antlers,” neither the gore nor the script takes a breath. Described as a creature with an insatiable hunger, the Wendigo serves as a clear metaphor for addiction. The more it feeds on people, warns the film’s sole Native character, the more it starves.

The camera isn’t afraid to take in the mutilated bodies of any people or animals that end up in the Wendigo’s path, and the buildup to the monster is well worth the wait. A gruesome, bony creature, covered in titular antlers, removes the last of Lucas’s father’s face while illuminated by sinister red light in a shot del Toro fans are bound to love.

For how long the horror takes to kick in and how unfinished the human drama is left, “Antlers” ultimately leaves viewers unsatisfied. The horror elements of the film play nicely as gore; scares and tense scenes lead up to a monster reveal that’s unfortunately overshadowed by meandering drama plots that want to have a deeper meaning but can’t decide on one.

It also falls prey to the trope of using Native American folklore for messy scares — following films like “Pet Sematary,” “Poltergeist” and “The Shining.” Although a Native creature plays a large part in the story, the only Native character appears in two scenes to give viewers an explanation of the Wendigo. For a story attempting to pick apart generational trauma, the struggles of Native Americans are only alluded to in one inconsequential line.

For horror fans, “Antlers” is worth a watch for the well-made monster and tense atmosphere that pervades the film. Unfortunately, a film that holds del Toro’s obvious influence is dragged down by taking a message it can’t quite reach too seriously.

“Antlers” is playing only in theaters now.