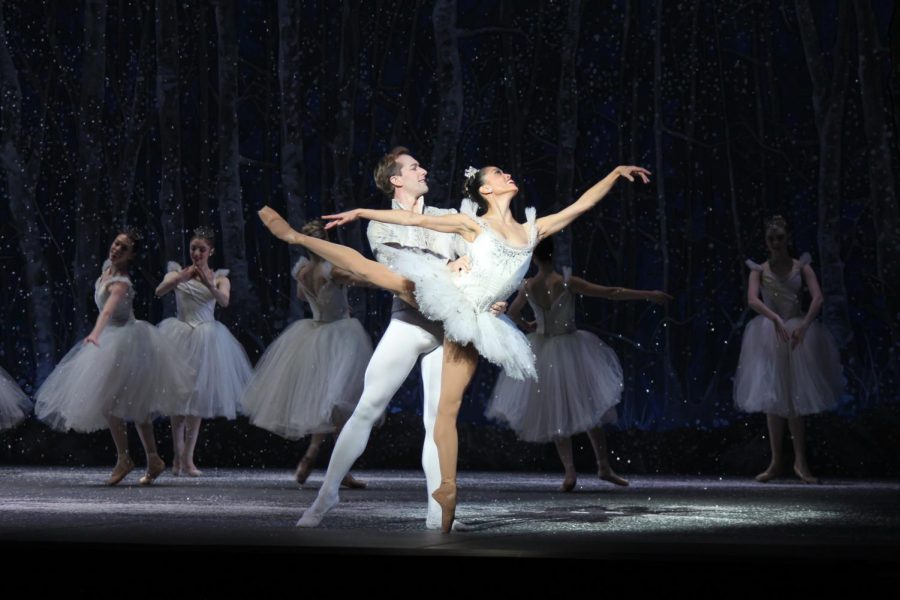 Boston Ballet’s newest production of “The Nutcracker,” which runs at the Citizens Bank Opera House until Dec. 26, is an enormous feat of skill that brings new light to the holiday classic.

The 1892 ballet tells the story of Clara, a young girl gifted a nutcracker by her uncle, Herr Drosselmeier, at her family’s grand Christmas party. Clara falls asleep by the light of her Christmas tree and dreams of a magical adventure with the doll, taking her from a fierce battle against the evil Mouse King, to a snowy wonderland led by a regal Snow Queen and King, to a glittery world of candy led by the iconic Sugar Plum Fairy.

The Boston Ballet pulled off these changes of scenery in a spectacular fashion — the intricately detailed sets designed by Robert Perdziola appear to seamlessly grow and shrink, taking the audience on a journey of massive scale alongside Clara. A city street transforms into a lavish house party; a living room becomes an expansive winter forest.

The costume design, also by Perdziola, transports the audience into a festive reverie.

The snow queen glimmers as if she is truly made of snow. The animal characters, large and cartoonish as if they were truly Christmas toys, left the children in the audience giggling. Yet Clara’s classic nightgown, simple and innocently white, stands out among a sea of complex regalia.

The show’s prologue, an addition that is not in every “Nutcracker” production, provides an interesting social commentary. Instead of opening with Clara’s Christmas party, the show opens on a stark, “Christmas Carol”-esque city street. Children and adult urchins bustle to keep warm by fires, with Clara watching as she buys from a street vendor. This prelude adds an element of privilege and class disparity to Clara’s story.

Beyond set, production and costume design, “The Nutcracker” allows the art of ballet to truly shine. Dancers seem to fly across the stage, performing gravity-defying feats of skill that are a wonder to behold. The dashing Nutcracker Prince and the dainty Sugar Plum Fairy dance a breathtaking pas de deux in the second act that earned gasps and cheers from the audience.

“The Nutcracker” marks Boston Ballet’s triumphant return to the Citizens Bank Opera House. Their most recent show was pre-pandemic, and there is a marked change to the show’s production. Older children from the Boston Ballet School take the place of younger children due to vaccine eligibility. Fewer ensemble members fill out crowd scenes. And, as with any 2021 production at the Opera House, audience members must show proof of vaccination or a negative COVID-19 test for entry.

However, the show’s scale doesn’t suffer from these adaptations. “The Nutcracker” is able to recreate the same whimsy as any production that is sure to please adults and children alike.

As the Boston Ballet’s return to the stage, the Christmas classic shines. “The Nutcracker” is a revitalization of the familiar and the comfortable, providing much-needed levity for an audience deprived of holiday cheer for so long. The ballet proves that amid pandemic concerns, holiday light cannot be dimmed.