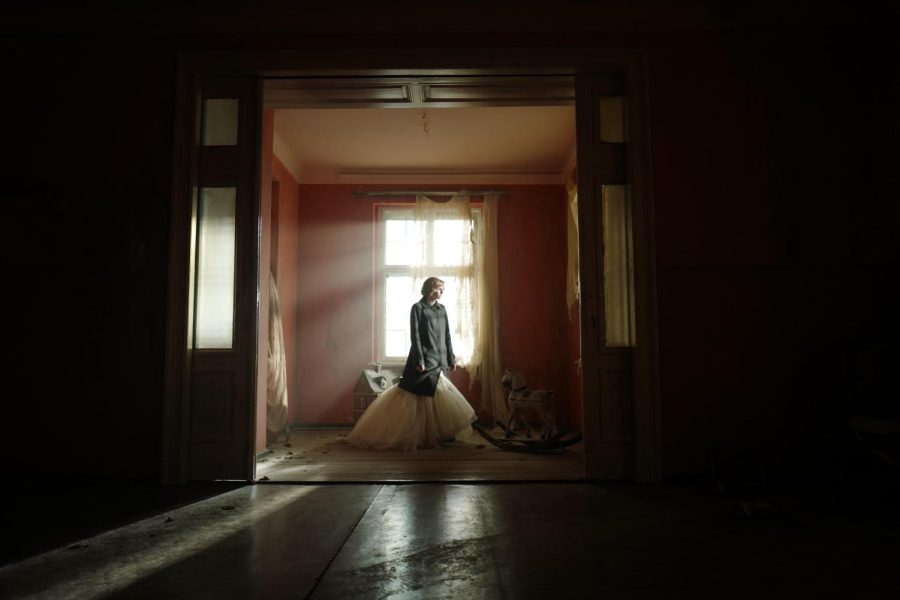 Kristen Stewart as Princess Diana in SPENCER. Courtesy of NEON via epk.tv

“Spencer” is a fraught 1990s family Christmas film, a love story of maternal devotion, a ghost story set in haunted houses and a prisoner of war drama all before it is a biopic of the late “people’s princess.”

The opening frame of director Pablo Larraín’s “Spencer” reads, “A fable from a true tragedy.” Where this 2021 drama departs from the objectivity of history and a long line of biopics, it upholds the tradition of the original Brothers Grimm variety of fairy tales — revealing the hands at play within the grandiose politics of princes, happy endings and damsels in distress. “Spencer” explores the losing game that no one knew better than Princess Diana.

“Spencer” is a horror film that sinks its teeth into the endemic horror of womanhood, history and power that one needs but cannot have.

Kristen Stewart’s studied portrayal of Princess Diana, whose maiden name gives the film its title, takes centerstage in conversation with her sons Harry (Freddie Spry) and, the heir to the throne, William (Jack Nielen).

Unbeknownst to the other sleeping royals, Harry asked his brother, “Do you want to be king?” as Diana and the young princes play a game by candlelight in the earliest hours of Christmas morning.

“I have no choice,” William said with premature resolve in the film’s most heartwarming yet gut-wrenching scene.

This is the conclusion that stalks Diana throughout her tumultuous stay at the royal family’s Sandringham Estate over the holiday in 1991.

The camera moves through Sandringham’s walls and floors as if it is a dollhouse. Princess Diana, losing a battle of wills against her husband, family and at times herself, recedes into her gaunt frame. The mansion takes on the air of a haunted house, fit with the phantom vision of Anne Boleyn, wife of King Henry VIII who was executed so the king could marry another woman.

Diana is crumbling within the walls of the Sandringham house, sparking concern from her children and the house staff, led by her most trusted confidant Maggie (Sally Hawkins), alongside criticism from her shamelessly unfaithful husband Prince Charles (Jack Farthing).

Larraín wastes little time getting to the brutal truth. Trapped in Sandringham, Diana binges, purges and cuts herself. She gets lost driving down the roads that surround her childhood home. Desperate for any escape, she contemplates running away and at one point, suicide.

Although no one is more privy to her inner deterioration than Diana herself, her sons beg her to stay well for them, and the servants try to impart advice on their favored royal.

The unyielding grips of mental illness and a centuries-old institution are not easy weights to carry, and as she battles in vain against the criticism, sideways glances and manipulation, Diana trades places with Anne Boleyn and begins to haunt the halls of Sandringham in her diminished state, the symbolic ghost in Larraín’s horror film.

This is how the near two-hour runtime of the film goes: Already resigned by her position and reduced by her illness, Diana pushes halfheartedly against her cage, scrambling blindly for any way forward when there is no way out — out of Sandringham, out of the family, out of her fate.

It is here in this cycle of harm and haplessness that the film forgets its Halloween fog, blood and ghosts and dons its true identity as an unflinching horror story that is more exhausting than it is shocking or frightening.

Diana’s constant resistance, only to be reigned in by her own better judgement, is the pattern of quiet horror that all women know: to be reduced and discarded, to be contorted and commodified for an image, role or idea.

“You understand that all you are is currency,” Diana reminded herself and the audience several times throughout the film.

A rebellious spirit who has been hung out to dry by the time the British royals gather for the film’s 1991 Christmas, Diana is the sacrificial lamb to a family and society too far gone into their own traditions to notice, or care for, their suffocating power.

“Their lenses are more like microscopes actually, and I am the insect in the dish,” Diana explained. “See, they’re pulling my legs and my wings off, one by one, making notes on how I react.”

Larraín ignores Hollywood’s favorite documentarian spectacle of the marriage between Diana and Charles in favor of a cinematic operation into the union of fairytale and tragedy that was always present in Diana’s story.

The royal family can’t change, but neither can Diana. Even if Diana’s defeat was predetermined by marriage, celebrity or institution, “Spencer” indulges in one interpretation of a happily-ever-after for the princess.

Unsatiated but surviving, Diana dances and chases her sons through Sandringham in an act of seditious joy.

She disrupts the royal family’s annual Christmas pheasant hunt, demanding that her sons leave the estate with her. The three speed down the country road away from Sandringham toward London to spend a day of total normalcy together, singing along to “All I Need is a Miracle” by Mike and the Mechanics and grabbing KFC from the drive-through window.

As the boys eat at the tourist-favorite Tower Bridge Road, their mother pulls away to study the River Thames and the London Bridge looming before them.

Screenwriter Steven Knight said in an interview with Esquire magazine, “She thinks, ‘I’m going to get those kids out of here.’ But of course we know that didn’t happen.”

For all her fast food and free spiritedness, Diana never fooled herself into thinking there was a final escape for her and her children. After all, she took a royal family sports car with the monarchy’s heir in the passenger seat to London, the home base of the entire royal circus.

Instead of a revolution, Diana is making trades and buying time, stealing moments of freedom with her sons back from the institution that first stole her identity, agency and family from beneath her feet.

Larraín’s Diana offers her sons the only consolation that the princess can guarantee — despite the killing crush of her family’s ways and weapons, she won’t allow herself to submit to the same fate as her phantom visitor Anne Boleyn, “who offered her head to the tweezers with such grace.”

“Spencer” isn’t interested in how best to adapt Princess Diana’s life into a two-hour blockbuster.

Instead, Larraín’s simultaneously dreamy and nightmarish direction digs at the everyday horror of womanhood. Stewart’s tour de force performance brings new life to a figure who was at odds and outmatched against a higher power, surviving in a state where freedom and joy are stolen, not given.