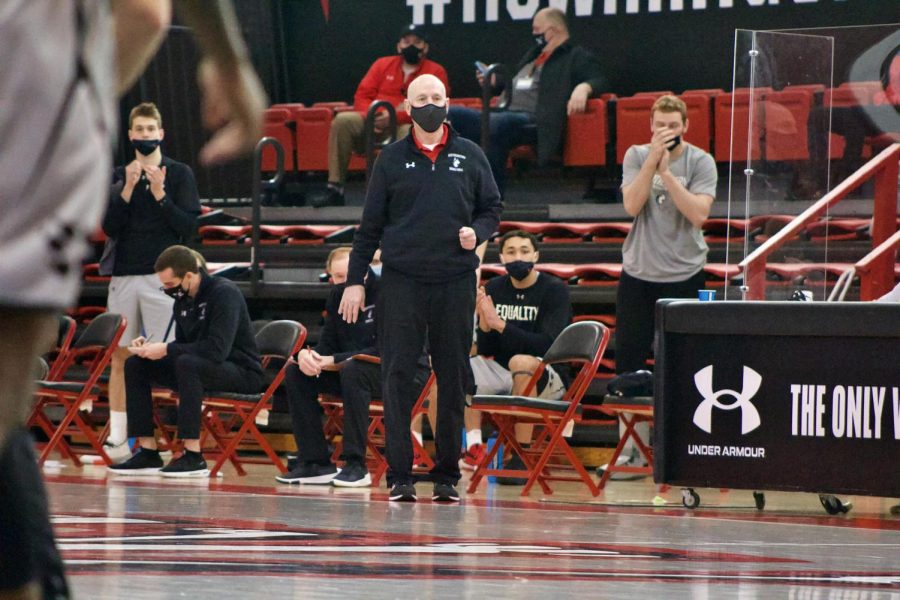 Bill Coen on the sidelines. Photo courtesy of Sarah Olender.

On a night to celebrate Bill Coen, the new winningest coach in program history, the Huskies (3-3) grinded out a win against bitter rival, Boston University (4-2).

The game was a defensive slug-fest, and Northeastern escaped with a win, 49-48.

The evening’s festivities began with a ceremony to honor Coen, and he received a rousing applause from fans, coaches and players alike.

“I’d be remiss without saying thank you to everybody who made it a special night for me, a lot of friends, family, and ex-players here today … guys from years past came into the locker room with this year’s group, and it was a really special moment,” Coen said. “They have a lot of love for this program, a lot of love for Northeastern, and it was great to have them back on campus”

It was the team’s first game back at Matthews Arena in almost two years, and the atmosphere was electric.

“Last year was a difficult year and we were just grateful for the opportunity to play,” Coen said. “To come back to Matthews with a great energetic crowd… the place was sparkling. It was a great atmosphere between two strong rivals, and it made for a wonderful evening.”

The Huskies prevailed, in large part due to an outstanding performance from junior center Chris Doherty.

Doherty led the team in scoring with 16 points on 5-7 from the field, finishing through contact on multiple plays. He converted a few and-ones and chipped in for 6-8 at the charity stripe.

He battled on the glass on both ends, recording three offensive and seven defensive boards respectively.

Coen had nothing but praise for the junior post-game, “I thought Chris had an outstanding game today, and really gave us a backbone out there. He was a monster on the boards, and gave us a great scoring presence … he set the tone early.”

It was a special occasion for Doherty, and the added motivation was evident in his play tonight. “Tonight was my first time playing in front of fans in two and a half years, so I was excited for sure… I hope the crowd keeps coming out like that,” he said.

It was a frustrating game for sophomore guard Jahmyl Telfort, who finished the game with only one assist to seven turnovers. Telfort was, “a little nicked up” in practice, according to Coen, and thus came off the bench. A combination of injury struggles and a lack of rhythm may have led to the uncharacteristic performance.

Despite this, NU received key contributions from their bench mob, highlighting the next-man up philosophy we have become accustomed to seeing from this squad.

“Our strength is in numbers…you get into these battles, they’re very physical and exhausting. If you can go deeper in your bench…you have that little bit left in the tank and you can get that rebound at the end of the game,” Coen said. “That makes all the difference.”

One of the biggest moments spurred by the bench, came when sophomore Guard Glen McClintok took a charge deep in the fourth quarter. McClintok sustained a sprained ankle in the previous game against Georgia State, and his ability to handle contact despite this showcases the team’s aptitude for adversity.

“That’s just how he is, he’s a warrior and a team-first guy,” Coen said. “He wants to win and he’s an extremely competitive young man…it’s that type of attitude that gives you the edge in a one-possession game.”

It was far from a perfectly executed game for the Huskies, but they made enough winning plays down the stretch. “I challenged our guys before the game to make sure when we walk off the court, we’re proud of our effort. We have to get better with some execution, but I couldn’t fault the effort this evening…especially Chris,” Coen said.