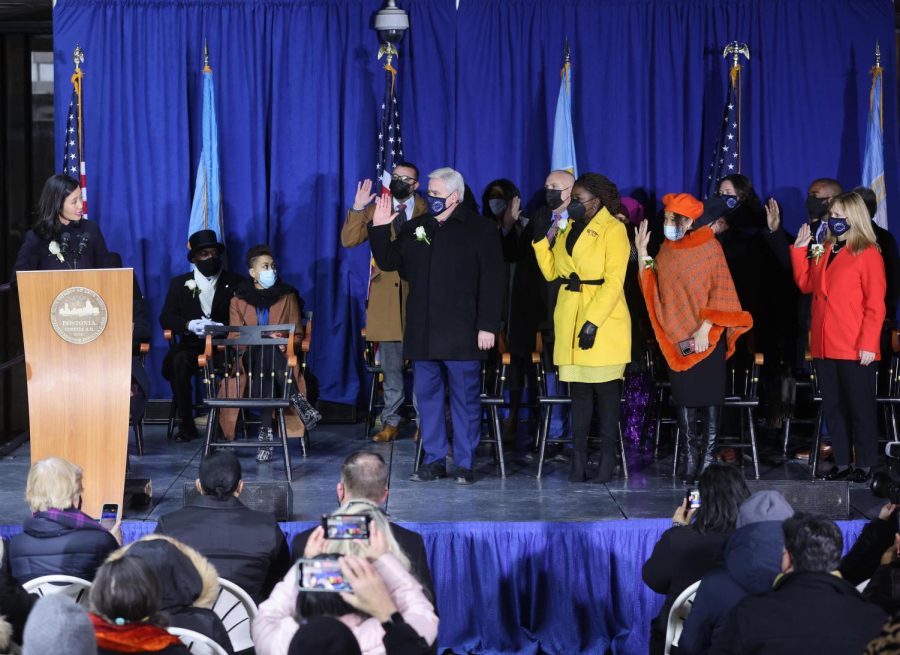 photo courtesy of the city of Boston

Boston’s newest city council members were sworn in at an outdoor ceremony at the Boston City Hall Plaza Jan. 3. The ceremony recognized all representatives elected in the Nov. 2, 2021 city election, including five new councilmembers.

The ceremony was originally scheduled to take place indoors, but Boston Mayor Michelle Wu announced it would shift to an outdoor setting in response to surging COVID-19 cases and the rise of the Omicron variant. The event was also available to watch via livestream on YouTube.

Several prominent political leaders, including U.S. Secretary of Labor Marty Walsh, Sen. Elizabeth Warren and recently-nominated Suffolk County District Attorney and Northeastern alumna Rachael Rollins, were present in the audience. These figures, along with the rest of the audience, were welcomed to the ceremony with an opening speech by Boston City Clerk Maureen Feeney.

“As we begin, I want to recognize these extraordinary elected officials who have sacrificed so much to accomplish their goal on behalf of the people of Boston,” Feeney said. “They have chosen a life of service, a life lived for others, to make this city all that it can be.”

While Feeney delivered her speech, the sounds of protestors and sirens could be heard in the background. Groups of protesters gathered outside City Hall to oppose Wu’s recent vaccine mandate, announced Dec. 20. They chanted various slogans, including “shame on Wu” and “no vax mandates.”

Feeney then welcomed Bishop Nicolas Homicil of Voice of the Gospel Tabernacle in Mattapan to deliver the opening benediction.

Following the prayer, Denyel Fonseca, a representative for the Hyde Park area in the mayor’s Office of Neighborhood Services, sang the national anthem.

Feeney returned to the stage to read the certification of the election results from Nov. 2, 2021. She read out the city councilors who were elected, with the crowd cheering and applauding each person.

“It is with great pleasure and much excitement that we look forward to this new group of individuals who will lead Boston forward,” Feeney said.

Wu took to the stage to administer the oath. Three separate oaths were taken by the group of councilors, representing the City of Boston, the Commonwealth of Massachusetts and the United States respectively. After the councilors had repeated the oaths, holding their right hands in the air, Wu congratulated them.

The new councilmembers celebrated with embraces and handshakes before Wu continued with a speech.

“I just wanted to reflect that today, or actually this year, marks 200 years since the town of Boston officially became the city of Boston and created its first City Council. Two hundred years ago, those first 55 city councilors looked different than the body that we have just inaugurated today,” Wu said. “One hundred years after that City Council was created, there still were no women, no people of color, serving in the city of Boston. So as we mark this new year, it’s truly not just about the passage of time, but the progress that the city has seen, and that we will continue to rush into, in this time of great consequence.”

Wu called upon the new councilors-at-large, Erin Murphy and Ruthzee Louijeune, District 4 Councilor Brian Worrell, District 6 Councilor Kendra Hicks and District 7 Councilor Tania Fernandes Anderson and recognized each of their diverse backgrounds and unique talents. She also touched on the future of the city council.

“I know the deep responsibility that our constituents place upon us, and I know the power of the Boston City Council to make sure we are moving forward on the issues,” Wu said.  “In this moment, our constituents and our community expect us to move with urgency, to open doors for everyone and to deliver results.”

Wu noted that while the inauguration was held outside in the cold, many Boston residents faced similar conditions every day, recognizing those currently residing at the Mass. and Cass encampment. She ended her speech on a positive note, inspiring cooperation among elected officials.

“In this new year, let us find warmth in each other, even as we face stiff headwinds,” Wu said.  “We will make progress, and make sure that we are always holding the light of our Boston residents in front of us, and build that community that we need, and we deserve in 2022.”