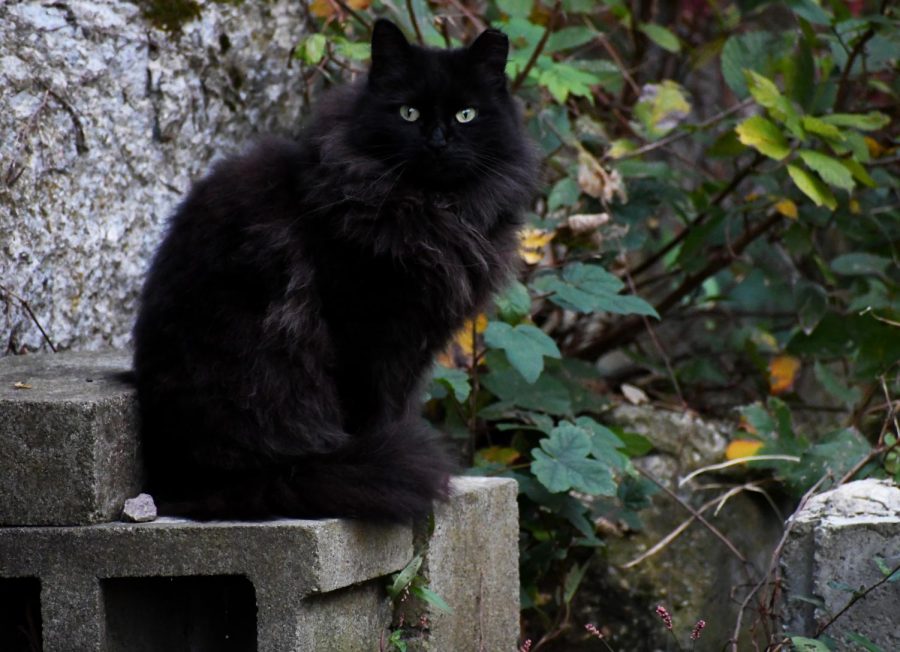 A cat prowls in a Mission Hill alley in October. Nonprofit Boston’s Forgotten Felines is searching for a new yard to keep shelters for members of its colony after the previous house was sold. Photo by Avery Bleichfeld.

A Boston nonprofit is searching for a new yard to leave shelters for feral cats on Mission Hill after the previous home that hosted them was sold. The call is the latest in a series of actions to care for cat colonies in the neighborhood as colony populations decrease, according to the nonprofit, Boston’s Forgotten Felines, or BFF.

This colony of feral cats — felines born on the street and not socialized to interact with humans — has been sheltered and fed by BFF, along with a handful of other groups of cats on the Hill.

One yard in the neighborhood had long housed two shelters for the felines — insulated wooden boxes roofs to keep off the snow. When the house was recently sold, BFF volunteers moved the shelters to a nearby yard in a panic, said Joni Nelson, president of BFF. When that landlord saw the shelters, he destroyed them.

Nelson said her organization is looking for a new place to leave shelters, especially for after the summer when the weather gets colder.

“What we’re looking for is somebody who will allow their backyard to have the shelter for the winter — I’m not worried about the summer, but for the winter these cats need a shelter, and I was hoping someone in the neighborhood would allow us to put two shelters in their backyard,” Nelson said.

The colony served by the shelter comprises five felines, but according to Nelson, it used to include 30 to 50 cats.

Mary Ann Nelson, a long-time Mission Hill resident who is unrelated to Joni Nelson, said she often saw cats outside wandering the Hill. Now, there’s just one cat that she sees prowling around her part of the neighborhood. Unlike the ones she used to see, Mary Ann Nelson knows this one has a home.

She said back when the Hill’s cat population was larger, she knew people who would feed the cats, work that has now largely fallen to BFF.

“I did have a friend who used to go out and buy bags of cat food for the cats and he had maybe five or six cat bowls on his porch where he fed the cats,” said Mary Ann Nelson, who has lived in Mission Hill since 1985. “He was one of a group of people that behaved like that with food for cats on their porch and water too.”

The decrease in cat populations, such as the one whose shelters were destroyed, is largely due to action from nonprofit organizations like BFF and others to trap the cats, spay and neuter them, and then return them to streets, Joni Nelson said.

When larger cat populations roamed the Hill, there would be notices put up, warning that a group was coming to trap and neuter animals. If owners didn’t want their pets sterilized, they should keep them inside during that time, Mary Ann Nelson said.

Rob Halpin, chief communications officer at the Massachusetts Society for the Prevention of Cruelty to Animals-Angell Animal Medical Center, or MSPCA-Angell, said that citywide, feral cat populations have been shrinking in the past decade or two.

“We see very few feral cats coming into our center for people who are concerned about their welfare,” Halpin said. “We get very few calls now of residents who are describing feral cat populations growing in their neighborhoods because [of] work [done by nonprofit organizations].”

That shift, Halpin said, has occurred along with a change in the model in which humane organizations deal with cat populations. Because the feral animals tend to do poorly when adopted, Halpin said most organizations have taken up policies of trapping the cats, sterilizing them and returning them to their communities to avoid placing them in a home only to have the animal given up.

Halpin said decreasing cat populations would benefit both the cats themselves, which aren’t evolved to live outside, as well as other wildlife in the area.

“We live in a part of the country where there’s [temperature] extremes that can be hard for cats. Also, feral, domesticated cats wreak havoc on wildlife, whether it’s small mammals, or birds, so the going away of feral cat populations would be a win-win,” Halpin said. “Certainly, that has been the hoped-for outcome of all of these organizations who’ve done all the yeoman’s work of spay-neuter over the years.”

A 2018 paper published in “Zoonoses and Public Health” said feral cats, which don’t receive regular medical treatment, can potentially pose a health risk to animals and humans by carrying and spreading pathogens. However, Halpin said he hasn’t heard of the cats often being vectors for disease. Instead, he said most humane organizations have other priorities when it comes to decreasing the number of feral cats.

“Feral cat populations were, for many reasons — mostly humane reasons for the cats themselves and the animals who are vulnerable to predation from feral cats — an area of focus for reduction from humane groups,” Halpin said. “If this trend seems to be reversing or even pausing, then you can count on humane organizations to double up their efforts again, because for the health and safety of every animal involved, it’s just not healthy to have large feral cat populations anywhere, Mission Hill included.”

“What I would like to see is the colleges [letting] the students know that you can’t go and get a kitten and then dump it at the end of the school year, because that’s contributing to the overpopulation and I have a serious issue with that,” she said.

She said she has tried to work with local universities in the past to make students aware of the issues, but her efforts have found little traction.

Halpin said the MSPCA-Angell doesn’t hear much about college students abandoning their cats on the street when they leave the city. In terms of students surrendering cats to the MSPCA, he said his organization tends to get less than a dozen of those surrenders per year.

For Joni Nelson, the ideal situation is that students don’t get a cat in the first place. But, if students do adopt one and need to surrender it at the end of the year, she said they should take the cat to surrender services at organizations like the MSPCA-Angell or the Animal Rescue League. Joni Nelson also said she and BFF can help students or other tenants find homes for cats they need to get rid of, but wants them to understand the weight of their choice.

“I want them to understand it’s the wrong thing … to take a cat knowing when you’re going to give it up in six months,” she said. “That’s mean, that’s cruel. … Don’t get a cat unless somebody is actually going to take it home to Nebraska with them or wherever they go.”

For her, the most important thing is that the cats are treated humanely.

“I care more about the cats than people because it’s not their fault, it’s because [of] the irresponsible people,” she said.