Op-ed: Content on social media is no alternative to professional news outlets 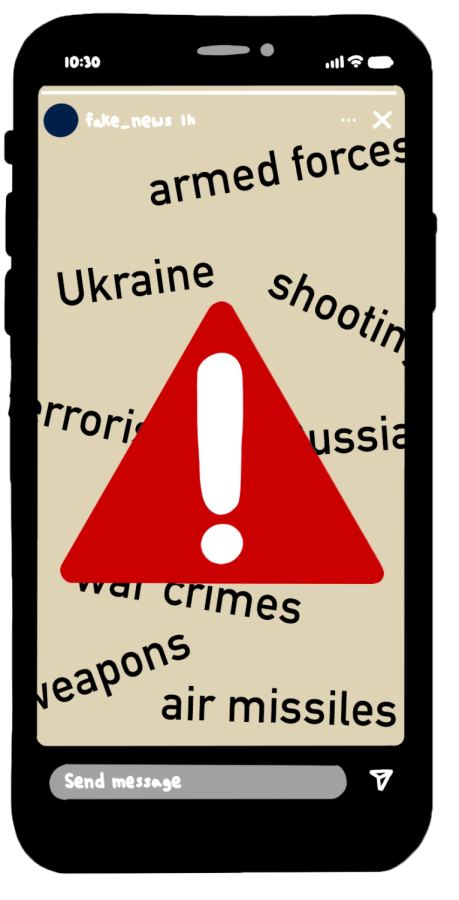 The fast paced spread of information on social media platforms should not be a replacement for traditional news outlets.

Anyone who can get their hands on technology can send information to a broad audience, a position historically reserved by professional journalists working for major news organizations. Affordable and portable access to social media has allowed stories to be spread in just seconds. Journalism has become a crowdsourced undertaking.

Crowdsourced news is when a group of people actively report on one subject. The practice has its pros and cons. It has made the press more democratic and inclusive, but it has also created enormous waves of misinformation. Social media, for example, hampered the world’s ability to halt a devastating pandemic and now has muddied the waters of the first European war since the Balkan conflict of the 1990s.

Reporting on the Russo-Ukrainian conflict has exemplified the benefits and drawbacks of crowdsourced journalism. Witnesses in Ukraine have helped spread the news on the war by documenting what is happening in their communities. Citizens continue to post images, videos and explanations of military advancements on social media. Without verification of authenticity, however, the alleged first-hand content shared online is dubious.

Social media poses several avenues for the spread of dishonest information about the war. This has not only obscured the truth from social media users, but has also caused the dismissal of the professional work that journalists are doing on the ground. People use social media to get news, but the apps do not match the reliability and veracity of professional news organizations. Social media cannot be used as an alternative for such outlets.

Media professionals are heavily reliant on citizens’ reporting. At the same time, they need to substantiate the information and meet the time-pressuring demands of editors and the public. Journalists have a system in place to authenticate content. Media organizations like the New York Times take steps to check for the location of content shared and potential visual manipulation. As this process occurs, social media is a gateway for the spread of misinformation as people can freely post what they wish with no oversight.

Supporters of both Russian and Ukrainian armed forces have posted false videos that cast their side in a favorable light. A viral video on TikTok showed a Russian aircraft dodging air missiles. Another trending video showed a Ukrainian aircraft shooting down a Russian jet. Both of these videos were produced using visuals from the video game “Arma 3.” While they were eventually removed from social media, this is only one example of many false videos that are still circulating.

The war in Ukraine has been dubbed by many media organizations the “first TikTok war” due to the heavy content flow concerning the conflict. Many users, especially young users, are seeing war on TikTok for the first time and believing what they see. To no fault of their own, they are being fed this information through unreliable sources and therefore have no clear understanding of the war.

In Russia, the Kremlin has weaponized social media by hiring internet trolls to push out disinformation about the war. Russians consuming and trusting the information blame the war on the United States and other Western allies for threatening aggression.

Fake news has flooded China’s largest social media platform, Weibo, as well. People in China are following the war on Weibo since the state blocked citizens from using other major social media apps such as Facebook, YouTube and Twitter in 2008. Posts on the website antagonize Ukraine, reflecting the Russian narrative of the war. False claims made on Weibo reported a Ukrainian genocide against Russian citizens in the east and alleged Ukrainian terrorist attacks in Russia and Donbas. Allegations that Ukraine’s aggression and relations with the West had caused the war were also posted.

That being said, professional war correspondents in Ukraine are working vessels of valid information, combating fabrication in the media. Reporting on the warfront has provided people with first-hand intelligence on the war. New York Times, CNN, CBS News, Associated Press and Reuters to name a few, all have live updates where reports are streamed from their correspondents in Ukraine. Despite the risks of covering a messy conflict with a constantly shifting frontline, journalists have kept audiences in the loop in an ever-more demanding 24/7 news cycle. This abundance of news allows people who follow it to never fall behind on what is going on.

Social media has given the people a voice, but with the result of falsehoods filling our networks. With misinformation online, a snowball effect of a blurred reality develops and creates constant conspiracy within the social media community. If we are to enjoy the privilege of modern technology and the press, we must compartmentalize news disseminated from professional journalists and news curated by social media users and remember the unmatched value of the former.

As of 2019 the American Psychological Association recorded that teens spend an average of 7 to 8 hours a day online, many of which are spent consuming information, but not everyone considers double-checking a fact. College students are almost always on a pressing deadline and will click on the first link available to retrieve the desired information. It’s also used as a form of escapism, where we mindlessly scroll through apps and lack the motivation to question what we consume. This carelessness skews our understanding of reality.

Social media can provide a wealth of information. Platforms mobilized a powerful avenue for the sharing of social issues and the spread of activist movements. It has allowed us to dig deeper into the human condition and understand inequalities that have not directly impacted us. It has also granted us a voice to advocate for those movements and ourselves. Following the murder of George Floyd, people used Instagram accounts to spread awareness and share thoughts on the event and the following Black Lives Matter protests. That being said, posts about major political events like this one are riddled with misinformation. A post was shared, claiming that Black Lives Matter activists had attacked elderly white people. After the post was fact-checked, it was revealed that the photograph was of South Africans from years prior.

With this in mind, it’s important to serve as your own fact-checker. After seeing an announcement on social media, double-check the information with a well-known news organization before sharing a post and your opinion. We are not taught to take this measure when we do research, but it is something we can do to ensure we are an enlightened community.

Alexis Zacharakos is a first-year journalism major at Northeastern. She can be reached at [email protected].