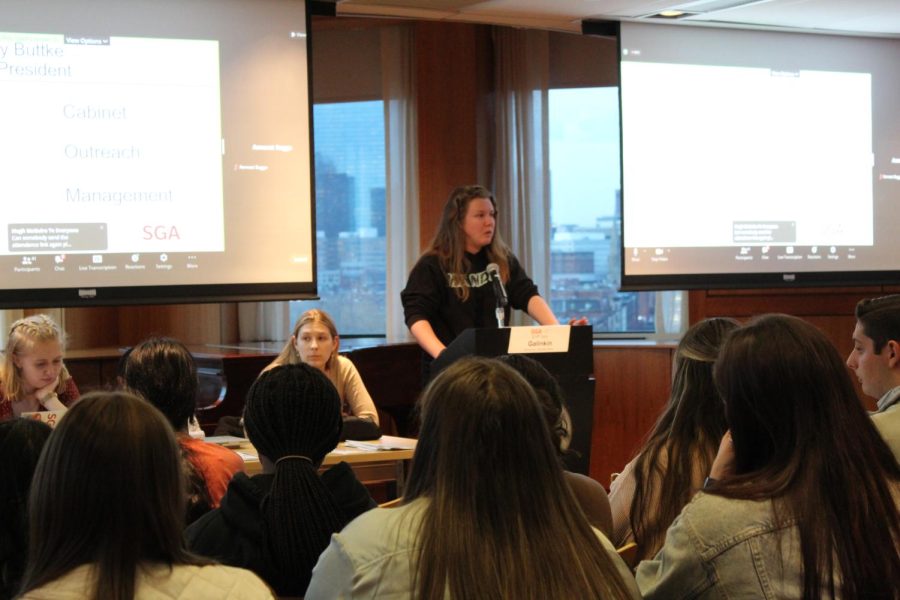 At the April 4 full body senate meeting, members of the executive board including current president Casey Buttke, addressed this year's tumultuous election cycle.

In speeches to the Student Government Association, or SGA, at an April 4 full body senate meeting, leadership addressed the tumultuous election cycle for the Spring 2022 election.

The election, which was contested for the first time in four years, saw election violation hearings, miscommunications, resignations and a secret ballot vote that was later overturned by the SGA executive board.

After the Jorio-Chávez slate, consisting of president-elect Angelica Jorio and executive vice president-elect Sebastian Chávez, won 42.33% of the student body vote with a record turnout where 25.95% of the student body submitted a non-abstention vote, student government leaders called an emergency election March 28, citing a provision in the Direct Election Manual, or DEM. This stated that in a direct election, the winning slate must receive a “simple majority” of the vote — a 50% threshold that SGA Parliamentarian and fifth-year health sciences major Nicole Miranda argued the Jorio-Chávez slate did not achieve.

Disagreement over the meaning of “majority” among key SGA leaders sparked a series of arguments over the legitimate winner, with different members bringing their own interpretation of the DEM to the executive board.

According to a memo published to the SGA website March 31 alongside the election results, the elections chair cited the precedent set by the 2018 contested student body election, where the winning slate received about 45% of the student body votes, as evidence that the winner could be determined by a plurality of votes.

Miranda later presented her interpretation of “majority” as meaning “absolute majority,” or greater than 50% of the votes, to the executive board, which the board accepted. This resulted in the election decision falling to the senate in a secret ballot vote on March 28.

“Everything in the law is an exception. It’s never black and white. But in this case, I think it was,” said Giovanni Falco, a first-year political science and criminal justice combined major and co-campaign manager for the opposing New Horizons slate. “I think that there’s a clear definition for majority and plurality. … In terms of elections, [plurality] is a number of votes cast for a candidate in a contest of more than two candidates that is greater than a number of cast for any other candidate, but not more than half the total votes cast. And that’s what [the executive board] interpreted ‘majority’ to mean in our governing documents, which is false.”

However, the Jorio-Chávez slate, who would later be announced as the winners of the election, disagreed with the interpretation offered by the parliamentarian.

“There’s multiple ways to interpret the word majority,” said Jorio, a second-year political science and economics combined major and president-elect. “As far as we know, for the past five years until the previous contested elections, nobody ever raised the point of what majority means.”

The senate voted 49-34 in favor of naming the members of the New Horizons slate as the new president and executive vice president, or EVP.

What they failed to account for, outgoing SGA President Casey Buttke later said during her address to the senate April 4, was that the elections committee had agreed both campaigns would follow the “plurality” rule, meaning the winning slate simply had to receive a higher percentage of the vote than their competitor.

“Most of my slate was unaware of that,” Falco said. “I’m not sure when that was discussed or brought about but as far as we’re concerned, that never happened.”

It was on these grounds that the Elections Committee released a memo March 31 overruling the senate’s decision and stating that holding the emergency election was a mistake. In the memo, the Elections Committee disregarded the secret ballot election results and declared the Jorio-Chávez slate to be the winners, stating that they were reversing the decision to hold a senate election that “should have never happened in the first place.”

Falco took issue with the overruling of the senate, stating that even if a mistake was made, the error was made without ill intent and so the vote of the senate should remain valid.

“What the executive board did by overturn[ing] the senate vote broke multiple rules within our governing documents and within Robert’s Rules of Order,” Falco said. “Even if there was an error in procedure made, even if they did interpret ‘simple majority’ wrong, … because it was a good faith violation, you cannot in any situation overturn the vote of a senate or the assembly.”

However, Yousuf Khan, a fourth-year computer engineering and computer science combined major and the head of strategy for the Jorio-Chávez campaign, pointed out the inconsistencies between the last contested election with this one.

“Last contested election … they won with less than 50% of the vote and they were just confirmed and elected as president [and] vice president,” Khan said. “There was no senate vote, none of this process happened. … Throughout this whole process, we have just seen inconsistencies, how the rules apply to one slate versus how the rules apply to another slate.”

After the senate elected the New Horizon’s slate by 56.3% overturning the popular vote on March 28, members of the Jorio-Chávez team delivered impassioned speeches on the floor of the senate during the Open Discussion, expressing disappointment with the actions of the senate and beliefs that the voice of the student body had been ignored.

Elections Chair Sam Chaturvedi, a third-year computer science and computer engineering major, resigned on the spot, stating that the overturning of nearly 9,000 student body votes meant that the New Horizons slate would not have the authority to lead.

“In an organization that has no moral high ground, no authority to lead, who is going to work with you? How are you going to lead?” Chaturvedi said during the March 28 meeting’s open discussion. “There is no fun in winning an election when you didn’t win it.”

Jorio said her team was disappointed with the senators for voting against the student body.

The April 4 full body senate meeting showed the after effects of the tension among not just members of the campaigns, but all members of the senate with conflicting ideas on how the election should have been handled.

Accusations of bias aimed at mediators of the election were made by members of both slates. They centered mainly around multiple DEM violation complaints filed against both campaigns and their subsequent hearings, appeals and rulings.

The Jorio-Chávez slate filed a complaint against New Horizons March 9, alleging that EVP candidate Abigail Sodergren, a second-year data science and business administration combined major, had used her privileges as current chief of staff of SGA to improperly approve tabling for New Horizons. It was later determined to be a miscommunication — Elections Chair Chaturvedi had given Sodergren permission, but forgotten that he had done so.

Despite this, Khan said the Jorio-Chávez slate still felt that Parliamentarian Miranda was biased in favor of New Horizons, a result of her overturning the strikes issued to New Horizons.

The second DEM complaint, filed by New Horizons against Jorio-Chávez in the closing weeks of the election, alleged two violations and asked for three strikes for each — a number that would disqualify the slate from running — based on an improper placement of campaign materials. They referred to posts on social media of users complaining that Jorio-Chávez campaign posters had been placed in residence halls, on doors and covering other posters.

The elections committee dismissed the grievance as unprovable. New Horizons appealed to the Operational Appeals Board, or OAB, overseen by Parliamentarian Miranda, a non-voting member, which issued two strikes against Jorio-Chávez, just shy of the three strike disqualification threshold.

“[Chauturvedi] said we [were] wasting his time with this grievance hearing and he would not give them any demerit points,” said Falco, of the New Horizons campaign. “We felt this was the wrong decision. … It was a clear bias towards Jorio-Chávez. So we went to OAB and OAB did not agree with us about three demerit points, but they did believe they deserve two demerit points.”

“I think that [the elections chair’s] resignation showed where his bias was leaning the entire election,” Miranda said.

Jorio, on the other hand, expressed support for Chaturvedi and defended his resignation as an indicator that the senate was in the wrong.

“I respect Sam a lot for doing that. He’s been like the impartial judge throughout, and for him to really take the stand, for me, at least, it means that something really was wrong,” Jorio said.

In her address to the senate, Miranda expressed her frustration at how her actions were perceived by the student body and members of the senate.

“I’m just going to be honest,” Miranda said, addressing the senate April 4. “I think that the decision was reversed because it was unpopular. The fact that I was doing my job and I was called out for it, meanwhile, we had an elections chair who didn’t do his job for two years and it caught up to him and then that his mistake was the reason that all of this started and that was not mentioned once by anyone on leadership killed me. … I think that when it was finally time for me to do my job for once, … my role was ignored and overlooked. And it makes me feel like I was appointed to sit up here at the table and act like a clown.”

Members of both the current executive board and the two campaigns said they are looking towards reforming the DEM to prevent similar issues from arising in the future.

“We’re going to have continued extensive discussions about what in our governing docs led us to this point, and particularly how we can amend them to ensure that a situation this painful never arises again,” Buttke said in her address to the senate at the April 4 full body meeting. “But I want us all to remember that at the end of the day, we’re all students, and we’re all doing as best we can with what we’re given.”

Campaign members from both slates agreed with Buttke’s assessment at the April 4 meeting, hoping to avoid this turmoil in future elections.

“Your governing document should help you make you stronger and they have made this organization so much weaker,” Jorio said.

Falco concurred, and said the problems would not disappear anytime soon without change.

“The governing documents need to be updated. I think the DEM needs to be modernized, and I think we can learn a lot from this election,” Falco said.

Buttke reaffirmed her belief that everyone involved in the SGA decision to hold an emergency election and subsequently overturn the results had been acting in the best interest of the student body.

“As far as I’m concerned, there is not a single person in this room that has been acting in bad faith through the electoral process,” said Buttke, a fourth-year criminal justice and political science major, in her executive address at Monday’s SGA meeting. “We are by far the strongest when we’re all standing and doing what’s right, whether we all agree on what that is or not.”

Editor’s note: Angelica Jorio, the president-elect, is the former design editor for The News.