Devon Levi: From underdog to Olympian 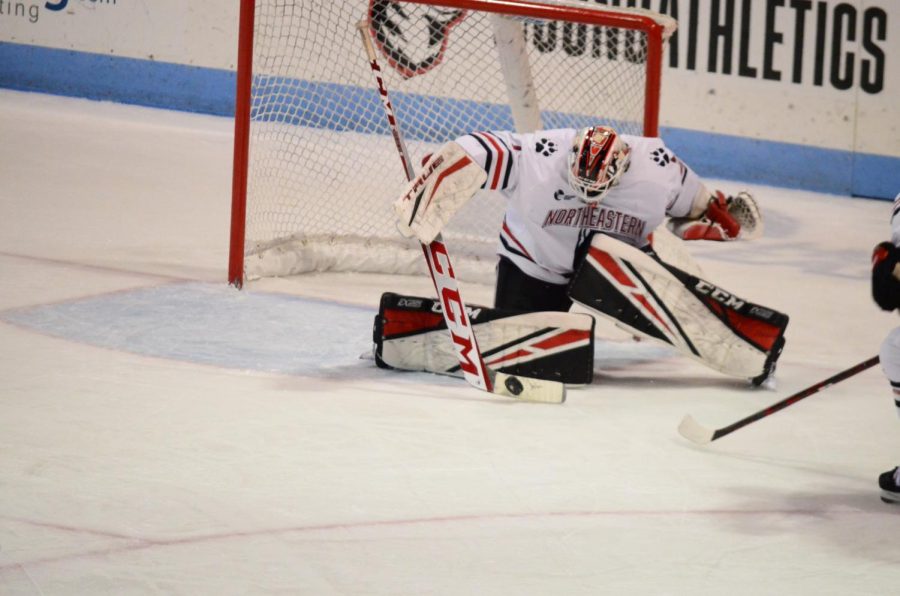 Devon Levi in goal for Northeastern.

When Devon Levi first tried on a pair of ice skates, he hated them.

“[My dad] threw me on skates when I was like four or five,” Levi said. “I remember crying the first few times. I was scared. I did not want to skate.”

Fifteen years later, he would represent Team Canada at the 2022 Winter Olympics in Beijing.

Levi began playing as a forward, but his heart always belonged in the crease.

“I went in net every time my dad was just stickhandling in the basement,” Levi recalled. “I’d throw the pads on and get him to shoot on me. Whenever our team missed a guy, I’d take their gear and put it on for team practice or whatever. I just loved it. I asked my dad at 12 years old if he’d get me a set of gear, and the rest is history.”

Levi started his career with the Lac St. Louis Lions, a Midget AAA hockey organization in his hometown of Dollard-des-Ormeaux, Quebec, becoming the youngest player the 18U program had ever seen at just 14 years old. After a five-year stint with the Lions’ organization, Levi joined the Carleton Place Canadians in the Central Canada Hockey League — an underrated team in an underrated league — for a year of junior hockey before officially committing to Northeastern University at 18 years old.

“[Carleton Place] wasn’t the highest level at the time,” Levi said. “There were other junior leagues that had better players, better shots, you name it. But I took the time to focus on myself and not really worry about what league I was playing in. It was more about playing games and getting better and just developing.”

And develop he did.
During his year in Carleton Place, he posted a .941 save percentage and 1.47 goals against average, or GAA, in 37 games — his best statistics yet. Despite his impressive numbers, choosing to play in a smaller juniors league instead of a more prestigious one made the college search difficult.

After months of scrambled emails to colleges and fallen-through commitments, Levi finally found an opportunity to join the NCAA ranks when Jim Madigan, Northeastern’s former men’s ice hockey coach and current director of athletics and recreation, offered him a spot on Northeastern’s team. Now, he is in his second year and is majoring in computer science.

“At the time, I wasn’t getting much interest,” Levi remembered. “[Carleton Place] is just a little town in Ontario, so not many schools were coming out to watch. I was pretty lucky to catch Coach Madigan’s eyes.”

That fall, he was drafted by the Florida Panthers in the seventh round of the 2020 NHL draft.

Shortly after his transition to Northeastern, Levi received a call from Hockey Canada inviting him to try out for Canada’s 2021 IIHF World Junior Championship team. Hockey Canada hosted five goalies at a World Juniors training camp earlier that summer — a group Levi was not included in. When the organization removed one of those goalies at the last minute, Levi got the chance to replace him at championship tryouts in the fall.

“No one knew who I was [at the camp],” Levi said. “I introduced myself to some of the guys, and they were like, ‘Who is this guy? Is he trying out?’ It was motivating. I wanted to prove to them, like, yeah, this is it. I’m here. It’s time to make a name for myself.”

Levi came out of tryouts as Canada’s starting goalie. On December 26, 2020, in Canada’s second game at the 2021 IIHF World Junior Championship, Levi fractured a rib while reaching to make a save. However, fueled by adrenaline, he finished the tournament in the net, posting a .964 save percentage (breaking Carey Price’s all-time record of .961) and 0.75 GAA in the tournament, becoming the second goaltender ever to record three shutouts in the tournament and winning tournament MVP. His performance earned him international praise and recognition, but his injury delayed the start of his collegiate career.

“I twisted really weird, and [my rib] started to crack. And then throughout the tournament, it was a stress fracture, so it cracked a bit more and more and more,” Levi said of the injury. “I was actually planning on playing versus Merrimack [when I got back]. I was planning on making my college debut. It was, I think, half an hour or an hour before the game, and [my rib] just fully broke. And then I was like, ‘I can’t play. I can’t even move.’”

Sitting on the bench rehabilitating his rib for the next eight months left Levi eager to get back in his crease and concerned about his ability to play up to his potential in the 2021-22 season.

“I was really hungry to come in [this season],” Levi said. “I hadn’t played last year. I missed a lot of time. There were question marks like would I be able to perform, this and that. I was injured for eight months, didn’t have a lot of time on the ice, only got two months of skating before the season, so I was hungry.”

While he waited, however, he received some shocking yet exciting news: he had been traded by the Panthers to the Buffalo Sabres.

“As a player, you can get traded any time, but as a newly drafted player, you don’t think it’s going to be a few months after the draft,” Levi said of the trade. “I was pretty shocked, but once I talked to Buffalo, I was really happy with where I ended up. They told me that they tried pretty hard to get me in that trade. That’s a good feeling, when you have an NHL organization telling you that.”

The trade, which happened three months before the beginning of Northeastern’s 2021-22 hockey season, motivated Levi to, as he put it, “show [Buffalo] that they won the trade, not Florida.”

Levi made his college debut with a shutout in Northeastern’s season-opener against Bentley University Oct. 2, 2021. By early December, he had broken the school’s season shutout record, but that was far from the most exciting news he received that month. Sometime shortly before his 20th birthday, he discovered he might have a chance at joining Team Canada in the 2022 Beijing Olympics.

“I just saw on Instagram one day that I was in the running, and I had no clue that I was even eligible to go to the Olympics,” Levi said. “I thought it was a joke, like, the Instagram page, they don’t know what they’re talking about. Then, that night, I got a call from Hockey Canada saying, ‘We’re interested.’ It was a surreal moment.”

In the end, Levi did make the team. After attending a training camp in Davos, Switzerland with his teammates in late January, he headed to the Olympic Village in Beijing for the games. While he did not get any ice time at the Olympics, Levi said the opportunity to speak with other Olympians about their paths and hear what advice they had to give — especially his teammate Eric Staal, a former NHL forward  — made the experience special.

“Staalsy was just telling me about how… he didn’t get lucky. He worked for everything he got. He said that when you work hard and you know you do everything you can, things just happen for you. He was telling me you might not be playing here, but this is a part of your process. You’re going to look back on this moment and be like, ‘I needed to go through that to get to where I wanted to be.’”

Staal’s advice was encouraging for Levi, as it echoed Levi’s lifelong motto: Just do the work. Throughout his career, despite being overlooked and underestimated by organizations at every level, Levi has worked harder and achieved more than many thought possible.
In his rookie collegiate year, he broke the school’s season records for goals against average (1.54) and save percentage (.952) and doubled the season shutout record (10). Upon returning from the Olympics, he tied the record for most saves in a game when he made 60 saves on 61 shots against the University of Connecticut Feb. 25 — just five days after the Olympics ended. He was a top-10 finalist for the Hobey Baker Award — the award that names the best player in college hockey. Additionally, he won the Tim Taylor Award for best rookie of the year and the Mike Richter Award, which is given to the best goalie in collegiate hockey.

After a crushing Northeastern overtime loss in the first round of the NCAA Championship, the Sabers made their move on Levi, revealing their excitement about him and making it clear they felt they had indeed “won the trade.” Despite his historic season, he informed Buffalo of his decision to stay at Northeastern for another year, claiming he wasn’t done with the Huskies just yet.

“There’s still a lot to prove. We have a lot to prove as a team,” Levi said. “One year isn’t enough. You can’t just do something for one year and think you’re the best, so I want to prove it by coming back next year and topping what I did this year … I really want to win [a national championship] next year, and that’s a big part of coming back.”

Levi has spent his career defying those who have tried to slow him down, proving them wrong every step of the way. He has blasted through expectations, and said he doesn’t plan on stopping any time soon.

“When someone tells you you can’t do something, they have no clue what they’re talking about. No one really knows what you’re capable of other than yourself. You get knocked down again and again and again, you keep getting back up, and eventually, if you try enough, you’re going to succeed,” Levi said. “As long as you stay the course and you don’t give up, you don’t let these voices impact you negatively — instead, you use them as motivation, you use them as something positive to keep you moving forward — and it makes it that much better when you prove them wrong.”