The Huntington News • May 6, 2022 • https://huntnewsnu.com/68672/lifestyle/column-the-kardashians-know-how-to-turn-bad-press-into-good-business/

Column: ‘The Kardashians’ know how to turn bad press into good business 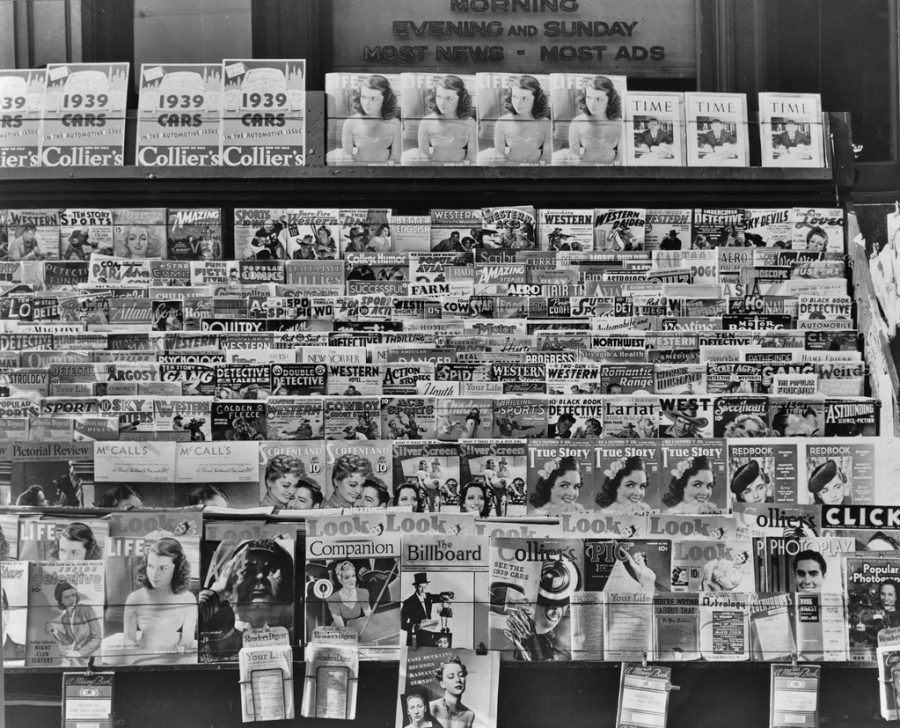 The Kardashians have transformed their tabloid and reality television legacy into a commercial empire. "A Newsstand in Omaha, Nebraska. November 1938." by polkbritton is marked with CC PDM 1.0.

The Kar-Jenner girls are back and on Hulu for an all too familiar iteration of their first hit reality television show, “Keeping Up with the Kardashians,” or “KUWTK.”

The first episode of the new series — with a new moniker, “The Kardashians” — is almost three times as long as the episodes of E!’s “KUWTK” and has been available for streaming on Hulu since April 14. The Kardashians and the Jenners, as well as their children and their partners, return to their reality TV roots, albeit on a new platform, and with greater creative control. With nine more weekly  episodes set to air and a second season already confirmed, the Kardashians are reminding audiences of their pop culture power and legacy.

“Burn Them All to the [F******] Ground,” the title of the first episode of the new series, is exactly what the Kardashian family has done to anyone who tries to mess with their billion-dollar media and business empire. Is there any way to demolish the relevance the Kardashians have built for themselves?

Cheating, sex tapes, Kanye West drama, pregnant Kylie Jenner, Travis Barker and Roblox are just a few of the things the first episode of “The Kardashians” has to offer. How could viewers not tune in? It seems anyone with a Hulu subscription has no choice but to join the millions of loyal fans who have been watching since Britney Spears’ tabloid fallout and the first-generation iPhone. After dominating most modern beauty trends, dating the most popular basketball players, rappers and now SNL comedians and pop punk drummers, it is safe to say the rapture might happen before the Kardashians fade into irrelevance.

The Kardashian family owes its success to its ability to turn bad press into good press — because any press is better than no press. They are always finding a way to flip negative media scrutiny into cold hard cash.

In the ’90s, Kris Jenner had a short stint in the national spotlight after the murder of her close friend Nicole Brown Simpson, and Robert Kardashian Sr., her former husband, became a household name as a member of the accused O.J. Simpson’s defense team during the murder trial. Kardashian was a well-known name by then, but Jenner was just getting started.

In 2007, Kim Kardashian’s sex tape with her ex-boyfriend Ray J leaked. The incident was nightmarish, as it would be for any woman, and the tabloid press pounced on the then-27-year-old. But the leak happened to coincide with the premiere of “KUWTK” on E!, and Kim Kardashian’s pop culture spotlight turned to the show. Suddenly, everyone knew the Kardashians, and everyone had an opinion on them.

Several years later, when Kim Kardashian’s younger half-sisters were just stepping into the spotlight in earnest, Kylie Jenner’s lips became the talk of the town. In 2015, the “Kylie Jenner Lip Challenge,” in which people took videos of themselves plumping their lips by creating a vacuum inside a shot glass with their lips to mock Kylie Jenner’s lip filler appearance, brought pop culture’s attention to her name. To address the challenge, Kylie denied getting lip fillers and instead released lipstick kits that sold out in less than 10 minutes.. Bad press doesn’t hurt so much when it can turn into a multi-million dollar company in a few minutes.

Likewise in the world of beauty, they helped propel the Brazilian butt lift movement in pursuit of a “big booty community” when small, slender bodies seemed to epitomize the “ideal” body type. Remember when Regina George’s butt was shamed after eating all those Kälteen bars in “Mean Girls” (2007)? Many young people don’t because the Kardashians took over, and now it seems as if everyone is doing everything short of eating Kälteen bars to look like them.

From the courtroom to criticism to rear-end constructive surgery, the Kardashians know how to turn the peculiar into a profit. In some instances, the Kardashians have even staged their own scandals. Some of the most popular episodes of the original “KUWTK” show feature dramatic storylines that fans suspect were fiction. In one episode, Rob Kardashian goes to the emergency room because he accidentally drank Viagra-laced coffee originally meant for Caitlyn Jenner. In another, Kendall Jenner and Kylie Jenner go missing in Thailand. In another episode, North West’s hamster dies on Kim Kardashian’s watch. And of course, viewers can’t forget the epic Kim versus Kourtney Kardashian fist fight in the season 18 premiere of “KUWTK,” which has been accused of being staged.

It appears that fans have learned to take everything that happened on “KUWTK” with a grain of salt, because how else are TV producers supposed to keep a show running and entertaining for 14 years and 20 seasons?

Prior to the family’s uber-posh lifestyle, the early seasons of “KUWTK” were primarily about the shenanigans and growing pains of a big family thrown into the national spotlight. Viewers could relate to the lessons the kids learn, like “celebrities can still get DUIs,” “having three kids with Scott Disick and never marrying was a bad idea” and “wearing diamond earrings in the ocean might lead to losing them.” Viewers who watched the show from its early stages are attached to the girls, as if they share an inside joke from having watched the Kardashians in their peak buffoonery.

In more recent years, the Kardashians’ reality series has zeroed in on their extravagant, enviable lifestyles. This “living vicariously through the Kardashians” paradigm has allowed the family to capitalize on all the people who respond to them, whether with empathy or envy. Without the show, the Kardashians would have never become a household name, nor would they have been able to create a loyal fan base that follows their every entrepreneurial move.

The Kardashians made outlandish baby names posh and latex a reasonable thing to wear. Their nonstop presence in American TV and social media, whether good or bad, has allowed the Kardashian family to start the most trends and sell the most products, simultaneously defining pop culture.

After a decades-long pop culture career, the Kardashians are at the top of their game. That’s why fans made fun of Kylie Jenner for naming her son Wolf, of all names, and why they’re all dying to know what she changed it to. For better or for worse, the Kardashians have had a finger on the pulse of all things pop culture and their latest show on Hulu is proof that they will not loosen their grip anytime soon. It doesn’t matter what the Kardashian’s say or do — audiences will keep listening, watching and buying.