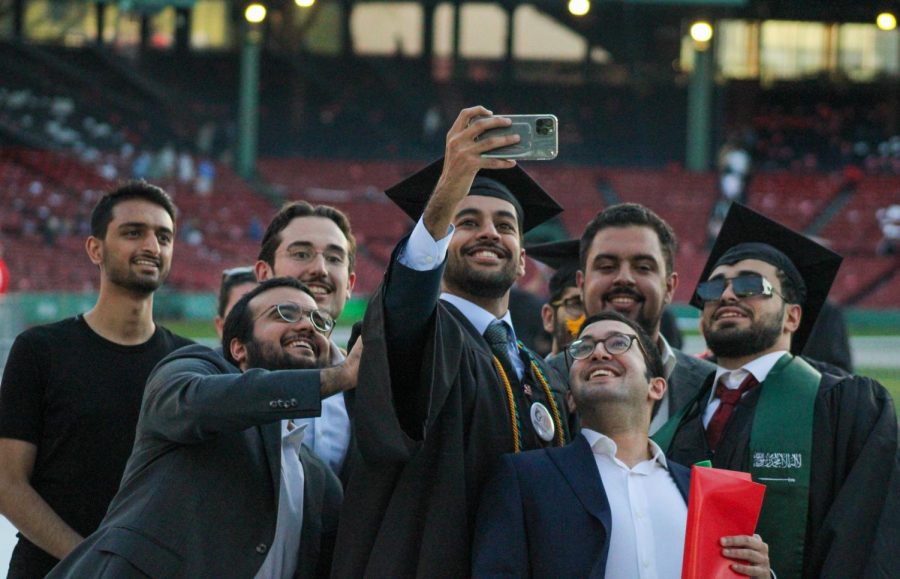 At Friday’s commencement, thousands of Northeastern graduates heard from a selection of guest speakers during the two-hour undergraduate ceremony before officially receiving their diplomas from President Joseph E. Aoun.

Early on the morning of May 13, about 3,700 graduate students gathered at Fenway Park, with 22,000 friends and families in attendance, to hear from commencement speaker Leila Fadel, a Northeastern alumna and award-winning NPR journalist, and student speaker and recipient of a master’s of business administration, Aniyah Smith. Later that evening, about 4,200 undergraduate students arrived with an audience of 24,000 to hear from their student speaker, cell and molecular biology major Adwoa Sefah.

“At Northeastern, we have learned to be resilient and relentlessly curious,” Sefah told her fellow graduating students in her speech. “We didn’t always have things figured out as students, and trust me, we will not always have them figured out as graduates, but through the life cycle of learning and experience, we will always find new ways to problem solve.”

Following Sefah’s speech, the honorary degree recipients for the undergraduate ceremony were announced. Donna Shalala, the former secretary of health and human services and a recipient of the Presidential Medal of Freedom, was awarded a doctorate of public service. Freeman Hrabowski III was awarded a doctorate of humane letters as he retires from his role as the president of the University of Maryland Baltimore County, which he held for 30 years.

Chobani founder and CEO and recipient of an honorary doctorate of global entrepreneurship, Hamdi Ulukaya took the stage to deliver the keynote address for the undergraduate ceremony, to cheers of “Go Hamdi!” and “Go Chobani!” from the audience. He told students about his experiences publishing a newspaper in Turkey, before coming to the United States and founding Chobani yogurt, where he now works with hundreds of other countries to hire refugees and fund global nonprofits.

Aoun completed the official graduation ceremony after the dean of each college took to the stage to confirm that all the students had completed the requirements for graduation. Students cheered as they shifted their tassels to the left side of their cap, following the graduation tradition. The students were then instructed by David Watson, a 2011 alum and the chair of the Northeastern Young Alumni Board, to attach their Northeastern pins to their robes.

“This pin symbolizes your determination, resilience and achievement. It also symbolizes your transition to a new Northeastern experience as an alumni,” Watson said in his speech. “Know that wherever you are in the world and whatever you do, you will always stand out as Huskies, recognized for your commitment, experience and heart.”

As part of the ceremony’s conclusion, the dean of the Khoury College of Computer Sciences announced the winner of Northeastern’s Presidential Medallion — Khoury college’s namesake, Amin J. Khoury, an alum and member of the board of trustees.

As the grand finale, Northeastern’s award-winning a capella team, The Nor’easters, sang an original song by graduating member Andrew Young about his time at Northeastern.

“My favorite [part] was definitely the performance at the end,” said Isabella Tran, a recent graduate with a bachelor’s of science in business administration. “It was really good and I think it brought back the liveliness after a long ceremony. It was just nice to dance and celebrate with our fellow graduates.”

After the ceremony, new alumni filed out of Fenway Park to meet up with their friends and families from the audience.