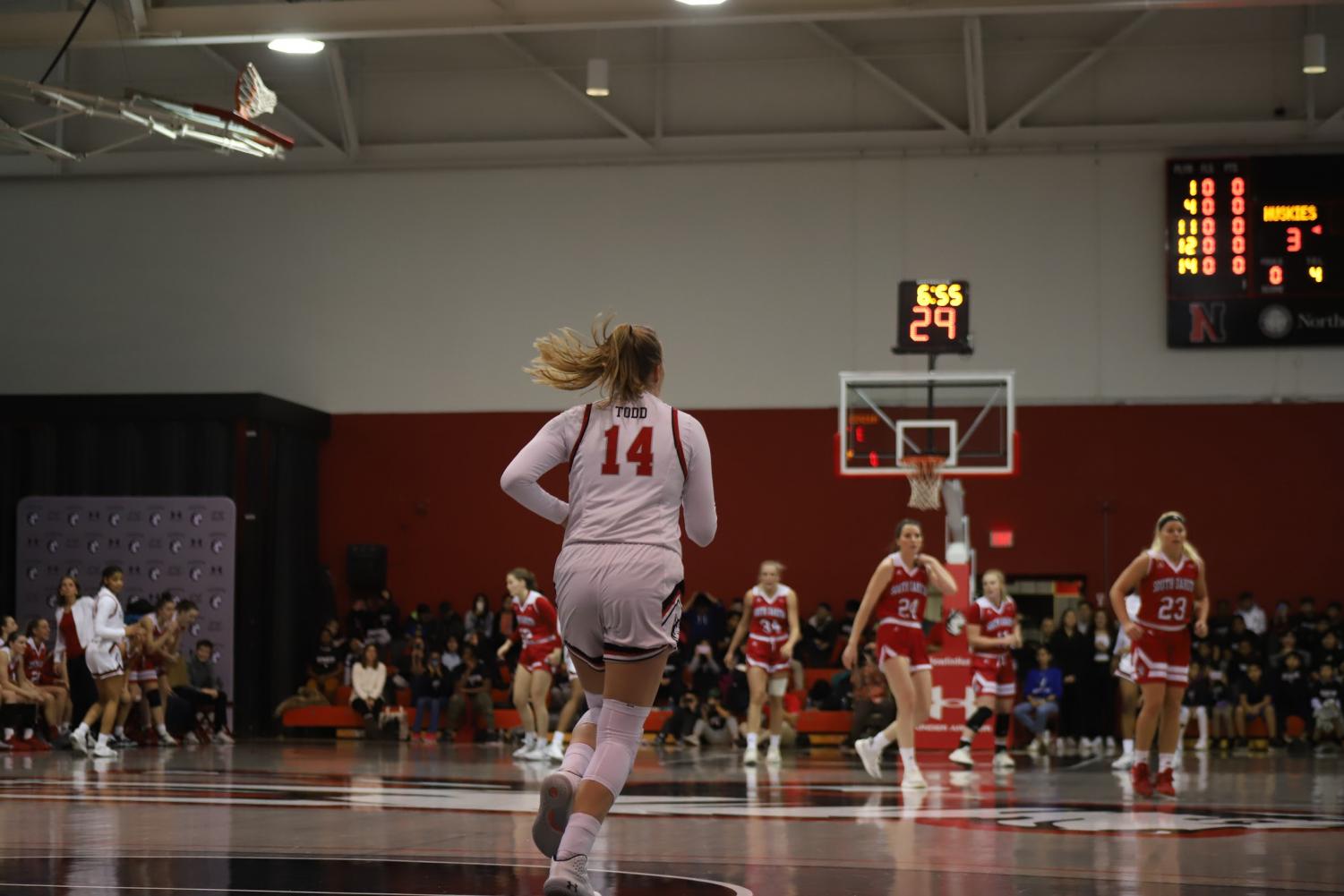 Senior guard Shannon Todd is the 22nd player in program history to reach 1000 points at Northeastern. Along with many other senior athletes, she had her final playoff season cut short due to COVID-19. (Nina Ellery Oliveira)

Senior guard Shannon Todd is the 22nd player in program history to reach 1000 points at Northeastern. Along with many other senior athletes, she had her final playoff season cut short due to COVID-19.

How senior athletes handled the unexpected end to their final season

As the coaches sat the crew team down in the boathouse mid-March to talk about the sudden end of their season, senior men’s rower Louis Pratt was confused and shocked, even though he suspected it was only a matter of time.

“It wasn’t really something that I even saw in the realm of possibility until about 12 hours before it happened,” Pratt said. “I remember we were meeting as a team and we were kind of saying, ‘You know, we’re probably going to go to online classes, but I don’t really think that means anything for our season. There’s no way the national championships are going to get canceled. That’s out of the question.’”

Pratt saw the Ivy League schools go down first, then the Pac-12 schools, followed by other schools the crew team predominately plays against. He knew Northeastern University would be next.

Pratt is among the many senior athletes at Northeastern and across the nation who had their seasons cut short due to the COVID-19 pandemic. While many people have lost something during this uncertain time, senior athletes have lost their final chances at championships, opportunities to prove themselves to professional scouts and the pride that comes from wearing the Husky uniform for the last time. With this sudden loss of their sport, there is concern for how athletes will cope during this period.

“They are probably feeling a mix of depression, frustration and anxiety,” said Grayson Kimball, a mental performance coach and a sports psychology lecturer at Northeastern. “When I say depression, I don’t mean clinically depressed, more like sadness.”

For many college and high school athletes, their identities can be wrapped in their sport, Kimball said. They may start to question who they are, he said, now that an integral factor of their identity is gone unexpectedly.

“One area of sports psychology and mental conditioning is trying to develop the athlete as a person, and while the focus is on their sport performance, there needs to be that secondary piece because eventually that sport is going to be gone from their life,” Kimball said. “I think it’s during these times where student athletes need to really think about who they are and what they want to be and maybe start looking into other areas that they may have already always had some interest in.”

Erika Barr, a first-year student in Boston University’s sports psychology master’s program, is already starting to meet with athletes over Zoom who are seeking support during this time.

“They’ve been working so hard for the past four years, and to have that taken away is quite shocking. And with that comes some grief over that loss,” said Barr. “It’s a situation that brings a lot of uncertainty and potentially some feelings of anxiety. Especially right now with a lot of things not being in an athlete’s control, that tends to bring up a lot of emotions. So seeking help for that, whatever that may be, would be great to see from athletes who are struggling.”

The Northeastern athletic department, the coaches and the teammates of senior athletes have reached out to them, providing them with mental health and educational resources, as well as personal support over Zoom.

“I mean, my teammates are my best friends, so I couldn’t not talk to them,” said Shannon Todd, a senior on Northeastern’s women’s basketball team. “Our coaching staff is emailing us and checking in to make sure we’re doing good in school and to make sure that the non-seniors are staying active and doing the best they can with that. We actually have a team Zoom workout session tomorrow. So that’ll be fun.”

Todd, now home in York, Maine, was an hour away from leaving the hotel for the Huskies’s first game of the CAA Women’s Basketball Championship when her coaches sent out a text: “Team meeting downstairs.”

“I was the first one there, and I just knew,” Todd said.

The remainder of the CAA tournament had been canceled due to COVID-19, with only two games into the competition at Elon University.

“We only have three seniors, and I am one of the only seniors that was not injured, so the team came around us and were helping us through the hard time because they knew that was it for our careers,” Todd said.

Women’s hockey defender Codie Cross was at Matthew’s Arena practicing when Hockey East canceled the men’s championship as the Northeastern University men’s hockey team was about to board their bus to Amherst for the first round of the tournament.

That’s when she knew her team would be next.

“It was heartbreaking, the whole room was very emotional. But for us three seniors, it hit a little differently,” Cross said of the moment her coaches told her team their playoff season was officially over. “It’s definitely not how any of us thought our season would end.”

The Northeastern women’s hockey team had just won their Hockey East Tournament the weekend before and were preparing for the first game of the NCAA tournament that Saturday against Princeton University when their coaches told them they would not be able to complete their record-breaking season due to COVID-19.

As both Todd and Cross play fall and winter sports, they will not be allowed to come back next year and finish what they started. The NCAA has permitted eligibility relief for spring athletes whose season had barely started, to come back and play next year.

“I mean, I guess maybe I’m a little jealous,” Todd said. “But I got to at least play my whole senior season with my team and they didn’t. But the fact that they get another year … [is] really nice for underclassmen, but seniors have a big decision to make because it’s weird when you’re gearing up to end your year and be graduating and moving on and leaving college to maybe be doing a whole other year of school.”

Starting second baseman Scott Holzwasser also understood that his season was going to be canceled, but took the news better after learning that he can get his eligibility back since his baseball season had only just begun.

“I’ll definitely be coming back,” Holzwasser said. “With the team that we had and it being my last season, I didn’t really want it to end like that. I’m also hoping to get drafted at some point. So if I get to keep playing, that’d be the best case for me.”

Pratt, who also qualifies for eligibility relief, wasn’t immediately sure whether he was going to return for another season until he went home.

“I went home [and] didn’t do anything for about three days,” he said. “And then I got on the bike, had a good workout and I was like, this is what I like doing. I like training hard, I like competing and I’m really not ready for that to be done in my life. I don’t really want my college career to end like this.”

Despite the initial solemness of the news, the athletes’ last practices were the best way they could end their season given the circumstances. The senior athletes will always remember these final moments: hitting home runs, rowing with only the senior class, leading teammates through a game of blindfolded basketball and wearing their favorite gameday sweaters one last time.

“We actually came back the day after we found out, and we had just a very relaxed, fun practice,” Cross said. “We scrimmaged for most of the day and then everyone kind of just hung out on the ice for a little bit after, especially us seniors and just kind of soaked it all in. All three of us seniors, we wore our black game day jerseys on the ice. That really was the last time that we got to put on the Northeastern uniform.”

While the athletes were devastated about the end of their season, Kimball pointed out that not all athletes might be feeling too bad. For those who might feel trapped in their sport due to a scholarship, who dread going to practices or who don’t like their coach, they feel a sense of relief.

“It’s like, they can’t really do anything or that scholarship is going to be taken away,” said Kimball. “So now that they don’t have to worry about X, Y and Z, they actually feel relaxed for the first time in years.”

As for the athletes who love their sport and can come back next year, they are excited for the second chance to put on the Husky uniform and are not wasting any time in social isolation.

“I think despite losing our season, a lot of the guys are really motivated right now to keep training,” said Pratt. “You can tell that there’s a lot of initiative being taken by the team to train really hard during this time that we’re not together with whatever resources we have available to us.”

Which is why next season, the athletes will play every game like it’s their last. Because as they learned this season, it very well could be.

Valeria Vazquez can be reached at [email protected] and @valeriacvazquez on Twitter.