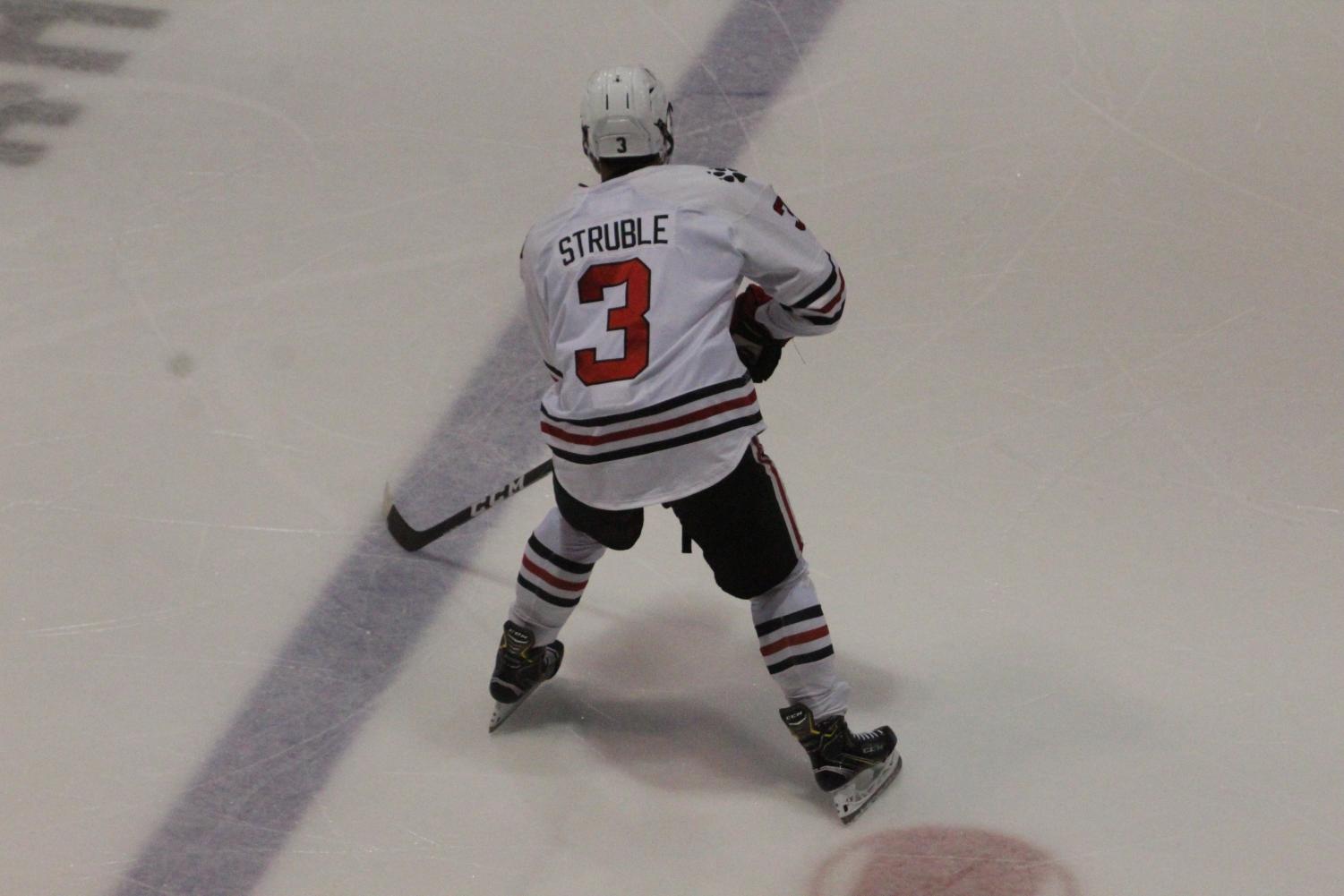 Sophomore defenseman Jayden Struble, speaks up about the BLM movement with the support of his team. (Sarah Olender)

Sophomore defenseman Jayden Struble, speaks up about the BLM movement with the support of his team.

Jayden Struble speaks up about racism, diversity in hockey

Appalled at the ignorance and hatred against the Black community, sophomore hockey player Jayden Struble felt he couldn’t hold back when protests and riots were rocking the nation, tweeting: “Being silent doesn’t ignite change.”

“It just really got me mad because I don’t really know how you could look at a lot of this stuff as a human being and not have empathy,” Struble said. “I realized that with my platform, being in hockey and all my followers really being white, that I needed to step up and say something.”

From a young age, Struble was acutely aware of the lack of diversity within the hockey community.

“Whether it be I was actually called the N-word or someone said, ‘Stick to basketball,’ or any of this stuff when I was younger, that’s kind of stuck out to me,” Struble said. “The kids saying that were white, so it just made me want to go and be better than them. … I think about that when I’m working out, practicing and all that, it’s almost like a prove-you-wrong and ‘I’m going to do me, and I’m going to do it better than you.’”

Struble’s success on the Northeastern Hockey team has given him a large online platform with nearly 2,000 followers and a verified Twitter account. He used his platform to express the anger he felt about the lack of progress with regards to the treatment of Black people in the United States.

“The Black community is, and has been, at its limit with the injustices of this country, so I want to stand up as a person of color from one of the whitest sports out there and say ‘I stand with y’all!!’” Struble said in a tweet. “And I ask for everyone reading this whether teammate or fan, black or white, to understand that a lot of things have to change.”

For men’s ice hockey coach Jim Madigan, it was important for the rest of the team to learn from their teammates of color and their experiences playing a predominantly white sport.

“I thought it was real mature for Jayden, who was only a freshman, to make a statement and speak up for something he believes very strongly in,” Madigan said. “I had a conversation with him immediately after he tweeted out and wanted to learn more from him about his stance and where he was coming from, so I can have a deeper and a greater appreciation so that we could have a better understanding with our own hockey club.”

“I’d say my role really is just trying to get people to at least be aware of everything that’s going on,” Struble said. “I know a lot of people, they’re kind of ignorant to it or it doesn’t really affect them so it’s kind of in one ear and out the other, but just kind of being that one black kid that someone actually knows and maybe it makes it a little bit more real for them.”

Beyond the physicality and skill Struble brings to the team, his teammate, sophomore Michael Kesselring, said he appreciates what Struble brought to the conversations and that he is a strong leader on the team.

“He’s a guy that can stand up in the locker room and say something and everybody will listen to him,” Kesselring said. “I think if we’re down in a game and we need some motivation, his voice can definitely be heard and kind of spark some light into our team.”

For Kesselring, hearing the experiences his teammates have had made him reflect on his years of hockey.

“I’m a pretty privileged white kid so I never really had to worry about any of that stuff, so it’s just interesting to see how Jayden said it and some of the stories that came out,” Kesselring said. “I think the main thing is to take a step back and look at it and appreciate what they did and how they said it, so we can move on and try to make a difference.”

Madigan said the team conversations surrounding race are not the end of its efforts. He plans to keep the discussion open and continue to do things down the road.

“There’s things that are not right and we have an obligation to stand up and say the right thing,” Madigan said. “We try not to be the passenger but be an active participant in trying to change the dialogue.”

Beyond addressing racism with the team, Madigan said they plan to continue community outreach. One facet of their service is a collaboration with SCORE Boston Hockey, an organization that strives to bring hockey to children who would otherwise not have access and show younger players that people of all backgrounds can play.

While hockey may not be the most diverse sport, Madigan said Northeastern hockey is proud of the diversity it has and strives to include the best players, regardless of any other factor.

“We’re just looking for the best young men who are quality people, quality students and quality hockey players and I think we’re known for that. We have a diverse community within the institution and certainly within our hockey program,” Madigan said.

Even though the Huskies have varied experiences and perspectives, Madigan said the team respects the players who shared their own stories and are able to learn from them.

“Sports have a way of breaking down barriers within your own team,” Madigan said.“I know sports sometimes can be mean and how people lash out saying the wrong thing to people and the players, whether it be based on race or ethnicity or religion, but within your own team color isn’t viewed. You are a teammate, and you’re respected.”

Struble said he has heard stories of negative comments made towards Black college hockey players, and that to fix that, people need to change.

“In general, just get educated and want to learn about what’s going on and what’s been going on because I feel like for a lot of people, it’s like a myth or something,” Struble said. “Educate yourself, reach out to different people and talk and be understanding.”

While Kesselring enjoyed the team discussion, he wants to see the same ideas implemented across the university. He believes that when people hear more stories of personal experiences, they will be more willing to help others.

“I would honestly like to hear a school discussion, just the more voices that can be heard the better because the more stories you hear the more background, more knowledge and more appreciation you can get for what some people had to go through,” he said.

The movement for racial equality is far from over both within the hockey community and outside of it, and it is important to Struble to keep the momentum going.

“I’d say keep listening, keep reaching out and keep spreading positivity and empathy,” Struble said. “Really anything you do with positive energy has a good effect on all those around you. Just hang in there for all the people of color, and we’re going through some tough times right now. We’ll see it out so it gets better.”