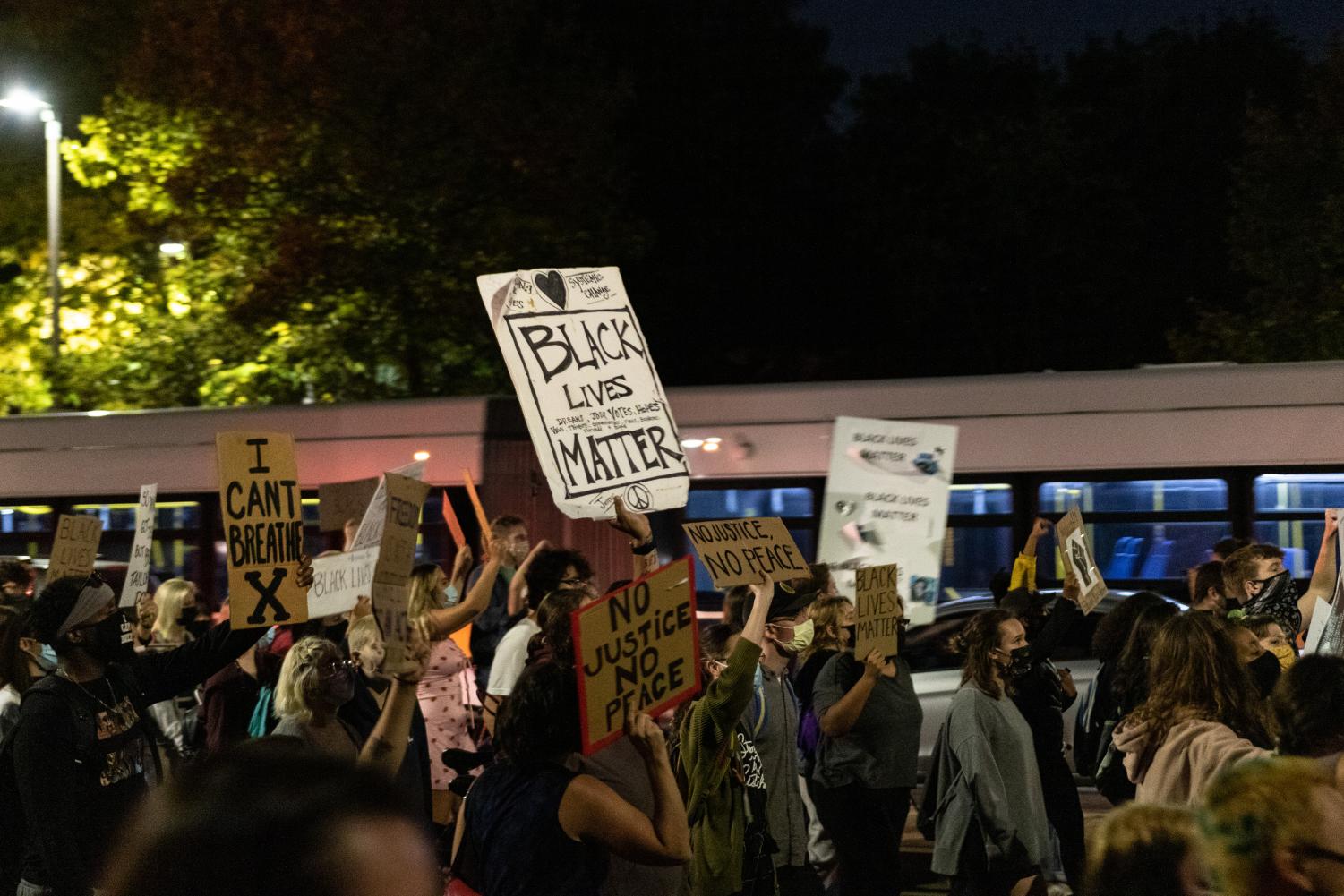 Protestors march through the Boston streets on Friday evening.

More than 1,000 protestors swarmed downtown Boston Friday following a Kentucky grand jury’s decision to indict just one of three officers involved in the killing of Breonna Taylor on charges of reckless endangerment. None of the three officers were charged with murder.

Taylor, a 26-year-old medical technician, died in March after three police officers conducted a botched drug raid on her apartment. The police used a battering ram to enter and later shot Taylor multiple times in the middle of the night.

“We waited … 194 days to get the verdict,” said Ern Jean-Jacques Jr., a protest organizer. “She still hasn’t gotten any justice.”

The grand jury indicted only one police officer, Brett Hankison, on three counts of “wanton endangerment” due to firing bullets that hit a wall and entered the neighbor’s unit. No officers were charged for Taylor’s death, and Hankison was released on a $15,000 bail.

“The fact that somebody’s wall in their apartment is more important and valuable than [Taylor’s] life just screams that there needs to be change from top to bottom throughout this entire country,” Jean-Jacques Jr. said.

Friday’s protest started in Roxbury’s Nubian Square at 6 p.m. Hawa Tabayi, a 16-year-old member of Solidarity North Shore, rallied the protestors in a nearby park.

“This week, this verdict, this choice has altogether embodied how Black women are treated across the country,” she said. “Always in the line of fire and always without protection.”

Tabayi advocated for the termination of police forces and prisons. “The only justice that will ever protect the Black community is the abolition of incarceral and policing systems,” she said, later adding, “People deserve new systems of safety that are not breeding grounds for racism, sexual assault, physical and emotional abuse and more.”

Tabayi said that she was exhausted and angry.

Protestors stopped at Boston Police Department before eventually making their way to City Hall. They chanted for revolution and continued to demand reform. 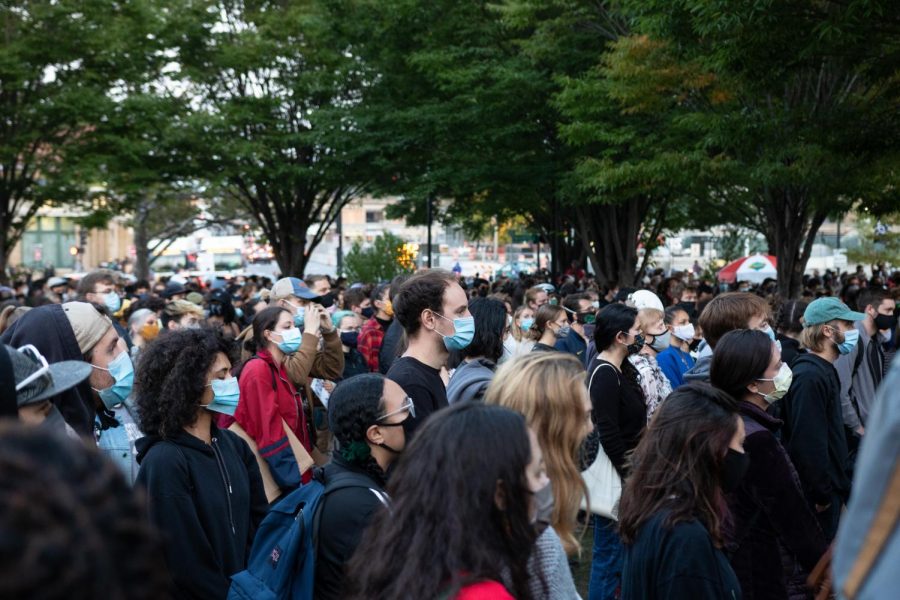 Friday’s protest was peaceful, with no arrests made. A study recently released by the Washington Post found that over 90% of protests this summer have been peaceful, despite incidents of police brutality that have resulted in the deaths of several citizens.

Gov. Charlie Baker activated the Massachusetts National Guard on Thursday in preparation for the protests. More than 1,000 members were deployed in several communities, offering “emergency assistance for the preservation of life and property, preservation of order, and to afford protection to persons,” according to Baker’s order.

“It just shows that this man doesn’t really care about systemic change,” he said. “In fact, it just shows that he wants to oppress the people even more, by bringing in these people with these big guns and tanks to basically suppress our voice.”

Jean-Jacques Jr. said that a list of demands is circulating the internet. The first demand requires the Massachusetts Attorney General Maura Healey to condemn the decision on Taylor’s case and to demand justice for Taylor’s “indefensible murder.”

“With how these cases are being handled, it’s literally being demonstrated that police can do whatever they want without being held accountable,” Jean-Jacques Jr. said. “We can’t do the same things. We can’t even keep a driver’s license if we get so many infractions, whereas police officers are able to be caught on camera abusing their power and the people they’re supposed to protect–over and over again.”

Cases like Breonna Taylor’s are not confined to places like Louisville. Systemic racism is present in the BPD too, Jean-Jacques Jr. said.

The third demand calls for the reopening of cases, such as that of Terrence Coleman, who was shot by BPD in October 2016. This summer, Coleman’s mother demanded that the case be reopened. She said that police were dispatched to their home because her son was mentally ill and needed medical attention, yet police shot him shortly after EMTs arrived. BPD reported that Coleman had a knife, but his mother insisted that the knife was not on him when he was killed.

Other deaths at the hands of BPD include Usaamah Abdullah Rahim and Burrell Ramsey-White, among others. Protestors are asking for the Suffolk County District Attorney to reopen cases so that officers are prosecuted to the “fullest extent of the law.”

Some advocates want the BPD to be defunded, including Ashawn Dabney-Small, an 18-year-old from Dorchester, who is currently running for Boston City Council as a candidate for District 3 and announced his campaign back in March.

Dabney-Small called out the current city councilors, who approved BPD’s budget in June. “Too much money is being allocated to the police department for reasons I don’t even know, for programs that don’t even go on or happen,” he said. Dabney-Small also emphasized that Boston needs a government that is reflective of its communities.

Certain city councilors have spoken out against Taylor’s death. Andrea Campbell, who recently announced her bid for mayor, said that the officers involved should be charged with murder.

Councilor Michelle Wu, who is also running for mayor, tweeted Wednesday, “Breonna Taylor was murdered in her sleep, and today, our ‘justice’ system decided that those who chose to protest this injustice may spend more time in jail than her killers. This is not justice — this is systemic racism & structural oppression working the way it was intended.”

Despite cries for police reform, some advocates think that the movement is dying out.

“It’s confusing because we still don’t have the change that we want,” said Jean-Jacques Jr. “If that was your family member … who was beaten and killed on TV, how would you feel? How would you feel about people basically giving up on you?”

Eiyannah Orphelia, a freshman studying Health Sciences at Northeastern, said that some people have treated “Black Lives Matter” as a trend, which she finds “dehumanizing.”

“I saw a lot of big people, big companies – they make their little social media post scruitinizing racism and discrimination … and then go on about their day,” she said.

Other companies, she said, just made a one-time donation. “It’s just like slapping a Band-Aid on a very, very infectious wound that has been with us for years, decades, centuries,” she said.

Correction: This article was updated at 3:30 p.m. on Sept. 27 to correct details regarding the charges issued towards the officers involved and details of Taylor’s death.