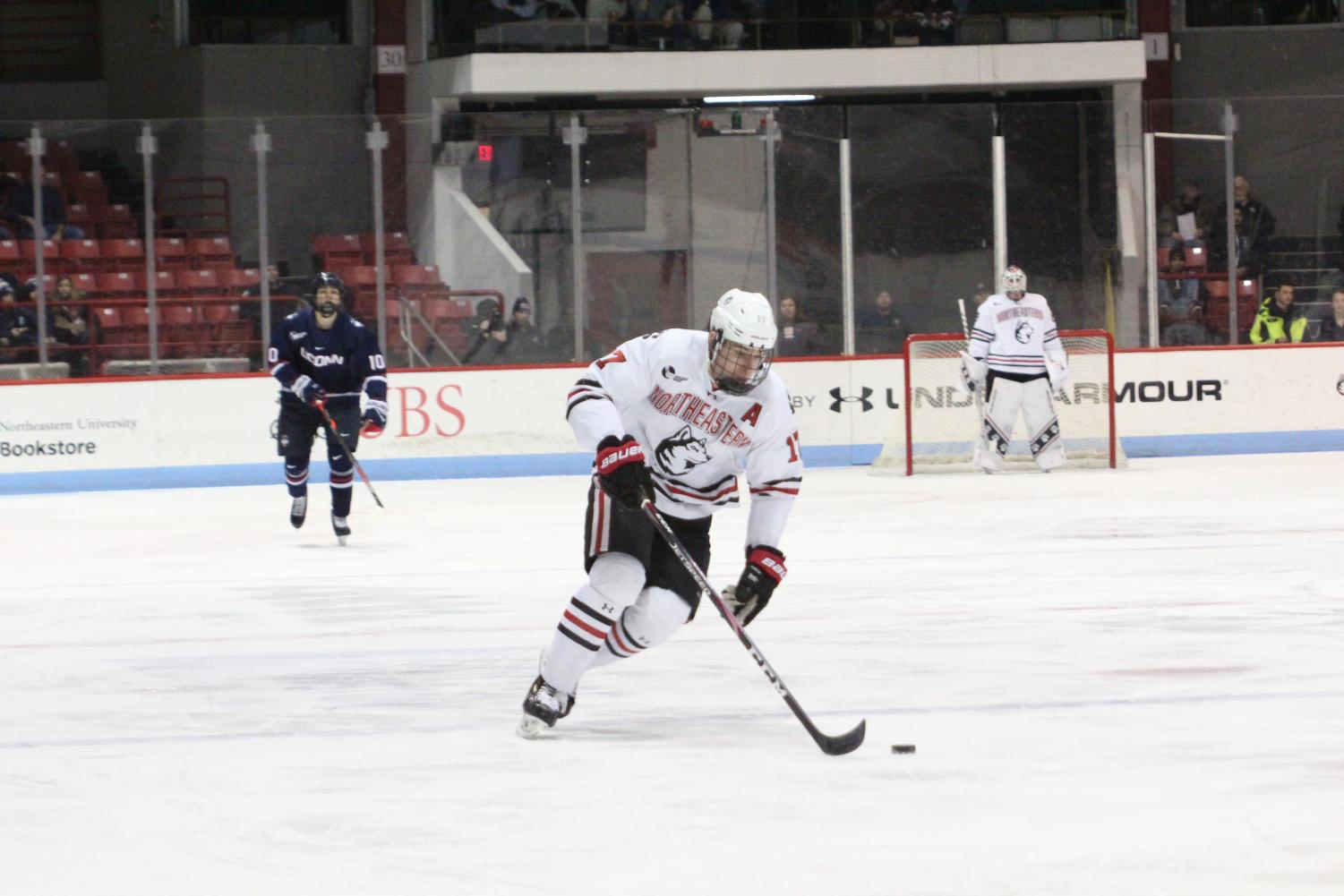 Matt Filipe skates the puck to the opposing net in a game against UConn last season in January. (Sarah Olender)

Matt Filipe skates the puck to the opposing net in a game against UConn last season in January.

From a Northeastern Husky to a Boston Bruin, Matt Filipe is always up for a challenge.

After his senior season got unexpectedly cut short due to the COVID-19 pandemic, Filipe saw his illustrious college hockey career come to a quick end. With the Huskies’ third Beanpot championship in a row and their first Belpot, it seemed like the 2019-20 season would be one of the best for Northeastern men’s hockey yet. This abrupt end to such a promising year left senior athletes like Filipe absolutely devastated.

“We sat back as seniors and were just kind of like, ‘Wow, unfortunately it ends here,’ but we just accomplished so much,” Filipe said. “It sucked that our final season got cut short, but we just looked back at it like, ‘We’re so lucky to experience and go through what we went through in those four years.’”

Filipe’s positive attitude during this situation was nothing new.

“He’s very fun, when you see his smile and see him having fun, it’s contagious,” said former teammate and senior Grant Jozefek. “He’s always very positive — it rubs off on everybody. When you see a guy having fun like that, you want to have fun too.”

Matt’s positive attitude and sportsmanship led him to follow in the footsteps of his father, former Husky Paul Filipe, and became an assistant captain his senior year at Northeastern — a role that Matt graciously took on and embodied.

“It meant a lot. My dad played at Northeastern; he was a captain a while ago in 1982,” Filipe said. “I grew up watching the game and it was sort of my dream to play at Northeastern, so it was a huge honor to be named assistant captain my senior year. I had my teammates’ trust and my coaches’ trust. That means a lot to me.”

Filipe’s success on and off the ice is evident in the accomplishments the Huskies had this past year and the support he provided his teammates. Head coach Jim Madigan also recognizes Filipe’s effort and accomplishments.

“He led on the ice by example of hard work and talked to our younger players and showed them what a winning culture is all about,” Madigan said. “He’s an honest, hard-working kid. He calls it as it is. He demands a lot of himself, he works hard and he demands a lot out of his teammates.”

In addition to his strong work ethic and leadership qualities, Madigan believes Filipe’s size and style of game will translate very well to the professional level. At 6 feet 2 inches and 205 pounds, Filipe leverages his size to play a physical game which will serve him well on a physically dominant Bruins team.

While his size will surely help him on the ice, Filipe’s open mind and desire to learn will take him very far in his professional career. During his time with the Huskies, he always looked up to the captains and older players before him as well as his coaches. Similarly, he hopes to be able to learn as much as possible from his Bruins teammates during his rookie season.

“I just want to learn from the older guys, take it all in and do whatever I can to help the team win,” Filipe said.

A dream come true, this Lynnfield, Massachusetts native is ecstatic to be playing for his home team that he grew up watching. Filipe is up for any challenges he may face trying to make it on the Bruins’ roster this coming season.

No matter what happens, Filipe will always be trying harder to succeed and has learned how to let go of any roadblocks along the way and use them to motivate him toward reaching his goals. As Filipe begins his professional career, he had a few words for young, aspiring hockey players:

“There’s going to be ups and downs, but you just really got to stick to it,” he said. “First and foremost, you have to believe in yourself.”