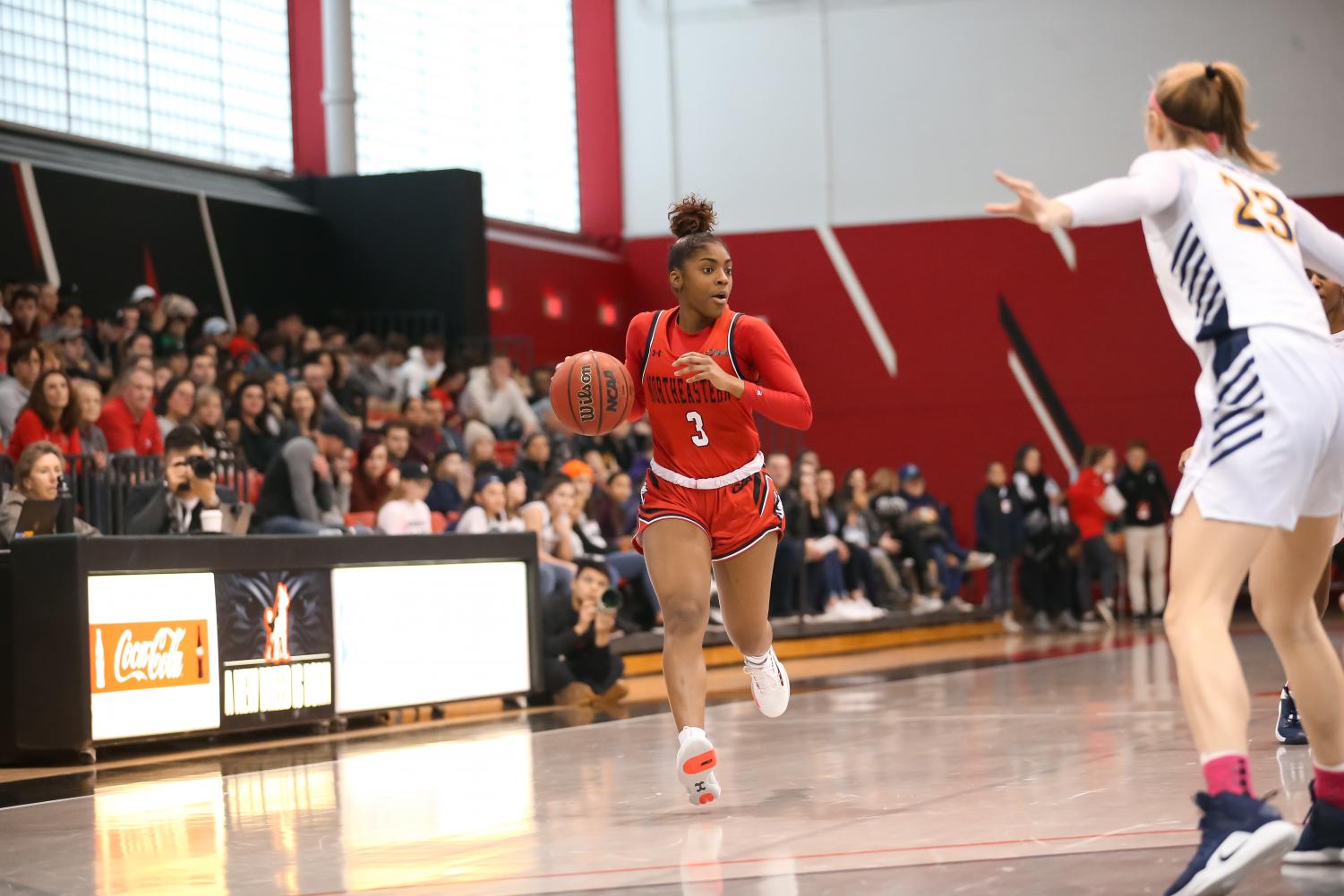 Women’s basketball is the last winter sports team to start their season, opening Dec. 20 against Maine.

Despite an unprecedented end to the 2019-20 season coupled with the loss of Courtney Redcross, Rachel Aho and playmaker Shannon Todd, Northeastern’s women’s basketball has its eyes set on the ring at the end of this unparalleled time for sports.

Returning junior Alexis Hill and senior Stella Clark earned preseason All-CAA honors on media day, making first-team and second-team, respectively. Hill, last year’s leading scorer, led the team with five double-doubles and an average of 13.1 points per game. Clark ranked fourth in average assists (3.6 APG) in the CAA and had an average of 11.0 points per game.

With the loss of a crucial player, Todd, coach Kelly Cole has added to the depth of the bench with four freshmen in the hopes to go far this season and develop for future seasons.

Freshman forward Leyla Ozturk, who is joining the Huskies from Germany, has played for club team ALBA Berlin as well as the German U-16 national team in the 2017 European Championship. She brings a fight to the game and will be an aggressive adversary, having played against older competition during her club years.

Maddie Vizza, another freshman, is a versatile point guard as proven by winning a state championship and earning her 1000-point accolade on the way. During her senior year, she averaged 13.0 points per game and 2.9 assists per game.

Fellow freshman forward Izzy Larsen, described by Cole as a “garbage player,” is great with rebounds and scoring second-chance shots. She will prove to be a great advantage for boards overall.

For the first time in Cole’s career as head coach, the team added walk-on freshman guard Amyrah Sapenter to the mix.

“She’s fit in right away, almost as if we recruited her from the start,” Cole said. “It’s truly amazing to see her play.”

With the season getting pushed back until Dec. 20 due to COVID-19 outbreaks among teams on campus, the Huskies will face an uphill battle when going up against other CAA conference teams that have already started their preseason. Key players for the season will include the aforementioned CAA preseason honorees, Clark and Hill; along with junior Kendall Currence, who scored her career-high 24-point game against James Madison University, or JMU, last season; and sophomores Mossi Staples and Mide Oriyomi.

“We’ve made some huge improvements and I think this is probably the best team I’ve seen since becoming a Husky,” Clark said.

With the pushback of the schedule, NU doesn’t open until Dec. 20 against non-conference opponent Maine. The team will then follow up with another tough non-conference opponent, Marist College, on Dec. 22 before playing against fellow CAA  team Elon University on Jan. 2, who they would have played right before the abrupt end of the season in March.

In order to ensure the safety of student-athletes, coaches and staff members, the revised 2021 CAA schedule features same-opponent and same-venue pairings on consecutive days.

“As far as preparation it’ll be easier because you have the whole week to prep for one specific team but at the same time, back-to-back games are going to be challenging because of injuries and recovery and going all out twice in 48 hours,” Cole commented about the scheduling format.

“I think it’ll be harder having back to back games. It’s hard to beat any team twice. We’re also a lot older, and certain injuries will arise and the number of players we have on the bench and battling injuries is going to be a challenge this season,” graduate student forward Ayanna Dublin said.

In terms of an unprecedented time of playing during a global pandemic, Dublin went on to say: “We’ve adapted to it, like any human being you adapt to the environment you are put in regardless on whether or not you like it and I think we’ve been doing pretty well with the masks. If NCAA decides last minute to change the rules and make us wear masks while playing, we’re ready for that.”

With an altered game schedule, fresh faces and two days between the first game and the start of practice being able to be run again, the team has some more obstacles standing in the way of that ring in the near future.

The toughest opponents they will face will routinely be JMU, Drexel University and Towson University.

“JMU is sitting on top and probably has the most talent in the league. Drexel and Towson are also up there as well,” Cole said.

Only time will tell how this remarkable season will go on, and whether or not the women’s basketball team comes out on top.