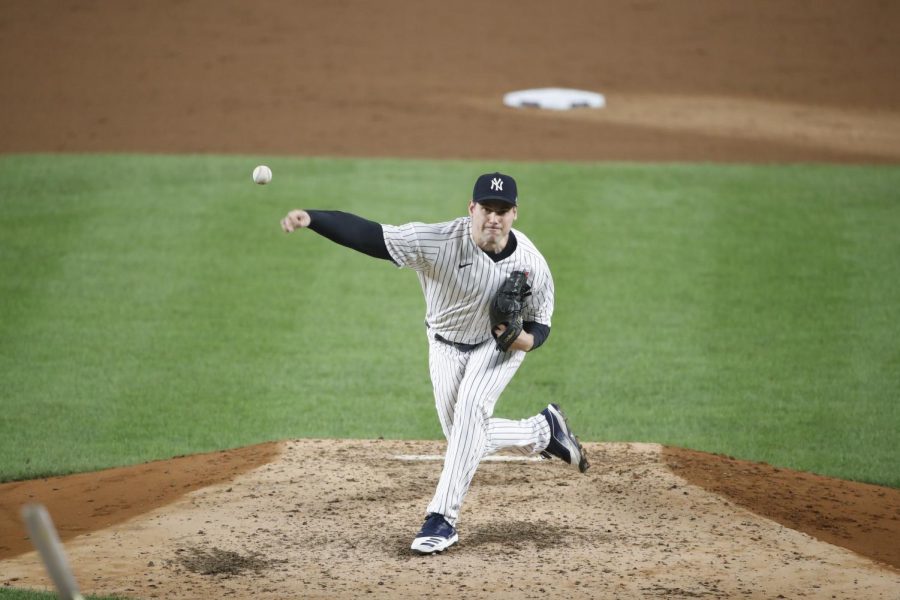 At the 2004 inaugural spring exhibition game between the Boston Red Sox and the Northeastern University Huskies, a 19-year-old Adam Ottavino pitched a scoreless inning against the soon-to-be World Series Champions.

Seventeen years later, Ottavino will put on the Red Sox uniform and return to Boston in a rare trade between the New York Yankees and the Boston Red Sox. This move was one for the books for Ottavino and the world of baseball as his rare trade marks the fourth time since 1998 that the bitter rivals have traded with each other.

“I didn’t think the Yankees and the Red Sox would ever trade with each other,” Ottavino said. “So for me to be traded there, it is definitely strange.”

The two teams have a tumultuous history that dates back to the 20th century when the Red Sox traded Babe Ruth to the Yankees. The trade led to an 86-year drought for the Red Sox in which they did not win a World Series. Since then, the two teams, out of superstition and hostility, have been reluctant to trade with each other.

“I know it’s the Yankees and I understand what that means and it’s the most storied rivalry in sports,” said Red Sox chief baseball officer Chaim Bloom in a press conference. “But if we’re not willing to do something that helps us because it also helps them, or worse… then, we’re just playing scared, and we’re not going to play scared.”

Ottavino’s career took off in Boston, where he attended Northeastern University, pitching for the baseball team from 2004 to 2006. In his collegiate career, Ottavino broke the school single-season strikeout record twice, and he continues to hold the school record for career strikeouts with 290. In addition, the now-relief pitcher threw his first career no-hitter against James Madison University in 2006.

“Immediately, in just a few pitches, we could tell right away that he was a very talented prospect,” said Neil McPhee, a former Northeastern baseball coach.“He has all the qualities of what a coach is looking for.”

McPhee first met Ottavino at a high school clinic the university’s baseball program put on at the Cabot Center. His command of the strike zone and his signature wipeout slider were two skills that stood out to McPhee.

In 2006, Ottavino was selected as the 33rd overall pick in the Major League Baseball draft by the St. Louis Cardinals. He pitched in St. Louis until 2012 when the Colorado Rockies claimed Ottavino off waivers. In 2019, as one of the top relievers in the MLB, Ottavino signed a three-year contract with the New York Yankees.

As a native New Yorker and now former New York Yankee, the relief pitcher was well accustomed to the New York-Boston contention. But starting this spring, he will now be on the other end of one of the biggest rivalries in sports history. Ottavino, however, is not phased by the rare trade deal between the two teams. He said he is excited to bring his talents to a new city.

“Playing for the Yankees was a dream come true, growing up as a New York fan,” he said. “And then playing for Boston [has also been] a dream since the time I was in school and I understood what the Red Sox were all about.”

Ottavino is no stranger to the Boston sports scene. During his time at Northeastern, Ottavino experienced the breaking of the infamous Red Sox curse and witnessed two Super Bowl wins by the New England Patriots.

“The passion for Boston sports is out of this world,” Ottavino said. “It is so intertwined in everything and it means so much to so many generations of people in New England.”

While his time at Northeastern was cut short after being drafted, Ottavino fondly remembers the three years he spent both on and off the field.

“I had a great time being in Boston and enjoyed all the different classes I took,” Ottavino said. “The team was a great group of guys and we had great camaraderie and we all really supported each other.”

While many of the signature spots around campus that he frequented are now closed, including the staple eatery Chicken Lou’s, Ottavino said he is looking forward to re-discovering what the city has to offer, this time with his wife and two daughters.

Ottavino slumped during the shortened 2020 season with an 5.89 ERA, the highest in his MLB career, so the trade came as no surprise to fans and sports critics as the New York Yankees look to cut payroll for the upcoming 2021 season.

“I’ve had my head down this offseason, just working really hard behind the scenes trying to make myself a better player and bounce back from last year and put my best foot forward this year,” Ottavino said.

And for the Northeastern baseball team, Ottavino’s career continues to have an impact.

“He brought notoriety and naturally that attracted players each year into recruiting,” McPhee said. “For the college kids, it means trying to bring their game at a level as close to [Ottavino’s].”