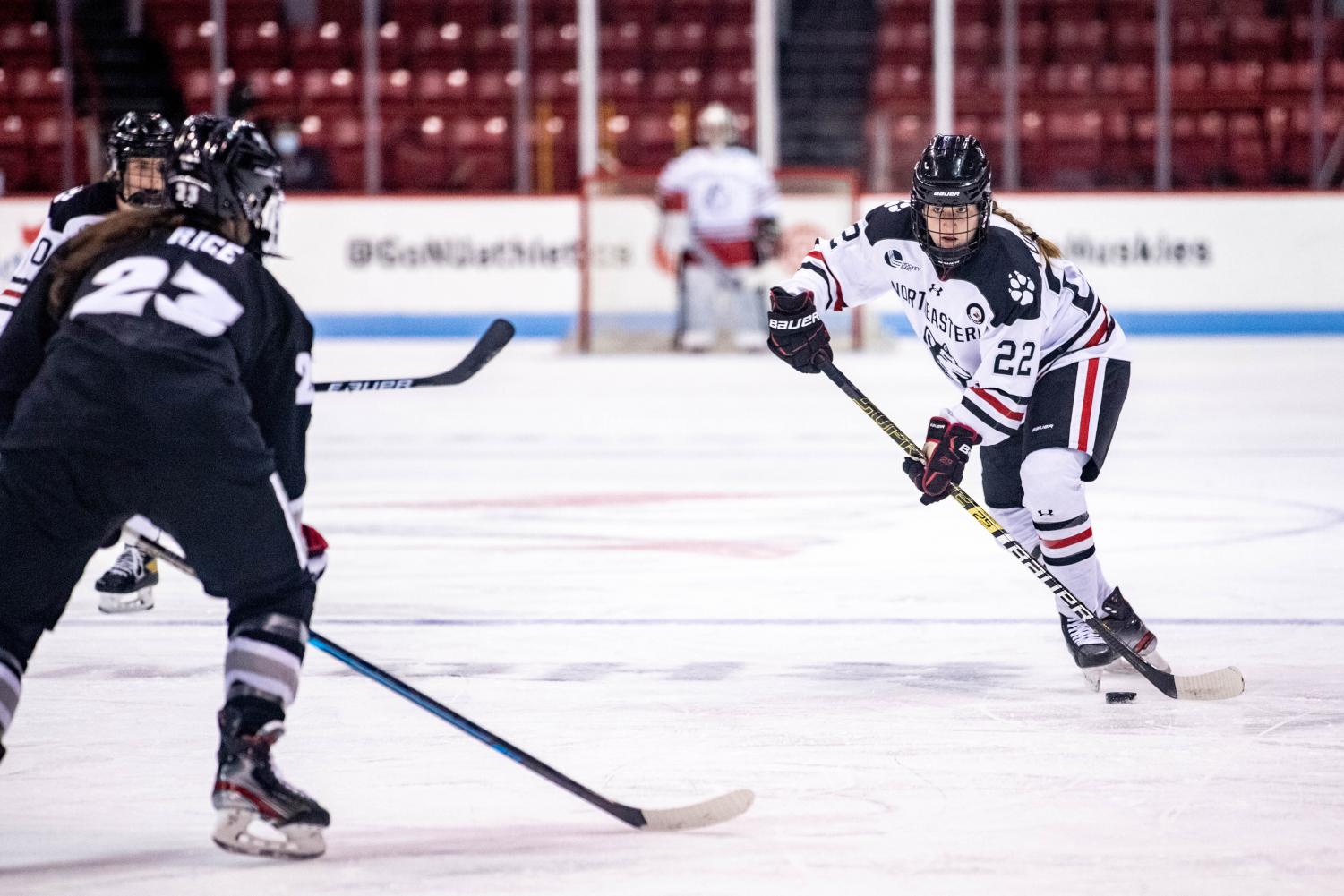 The Huskies will compete for the Hockey East title Saturday night against Providence. (Riley Robinson)

The Huskies will compete for the Hockey East title Saturday night against Providence.

There was certainly some question as to whether or not the Hockey East Championship would be played this year with multiple COVID-related game cancellations and program pauses across the conference, but it’s finally here. While some fans might be pleasantly surprised that the game can still go on, few should be shocked to see the No. 1 Northeastern women’s hockey team in the finals for the fifth straight year after a 19-1-1 run and a current 19-game unbeaten streak in which the Huskies have given up more than one goal just twice.

“[It’s an] exciting time of year, credit to the league and to all the schools in our league [for] getting this season to this point,” said head coach Dave Flint, who secured the all-time Hockey East lead for playoff wins with his 26th playoff victory Wednesday night.

The 2-1 NU win, which was decided by a shorthanded goal in the final five minutes, was arguably the hardest fought victory of the season for NU and one that reminded Flint’s team not to overlook their opponent.

“I’ve said it a few times already, and I’ll say it again today at practice that the playoffs are different, and you can’t take anything lightly. I think [the players] realized that Wednesday when UConn gave us everything we could handle,” Flint said. “I think it’s gonna be the same thing [tonight. Providence] is going to come at us. They got nothing to lose, and everything to gain, so we’re gonna see their best effort, and we need to be ready and not take them lightly.”

As Flint pointed out, the stakes are a bit different for the two teams. NU has all but locked up a spot in the national tournament, as even if they can’t pull out a win Saturday night for the guaranteed bid, their status as the top-ranked team in the country would make them the most likely candidate for an at-large bid. Providence (12-6-1), on the other hand, is ranked ninth in the country at the moment, placing them firmly on the bubble for the eight-team tournament and making the Hockey East Championship even higher stakes than it already is.

But even with NU’s spot in the NCAAs secured, the Hockey East Championship is still a championship, and another Husky victory would extend their program-record three-year championship to an even loftier four and finalize this year’s class of seniors’ undefeated postseason run. Only two other teams in Hockey East history, UNH and Boston University, have ever won four straight championships.

“I think they’re looking at it like ‘Hey, this is a championship game, we want to win another championship.’ versus ‘Hey, we’re already in the NCAAs, so it doesn’t really matter what happens.’  I think they’re pretty locked in,” Flint said. “I think for our senior group… they want to be able to say they haven’t lost a Hockey East playoff game. For them that would be a pretty big accomplishment, so I think that’s a motivating factor for a lot of our kids.”

To achieve that historic feat, there’s one more substantial step for the Huskies to take. Providence is a top-ten team and the tournament’s third seed, and senior goaltender Sandra Abstreiter is coming off a 33-save shutout in the Friars’ 1-0 OT win against the Maine Black Bears in their semifinal game. Abstreiter, like NU’s star senior goalie Aerin Frankel, was nominated for the national Goalie of the Year award for her impressive 1.89 GAA and .930 save percentage over 19 games this season. Abstreiter made the Hockey East All-Star Third-Team, only trailing behind two other Goalie of the Year nominees in Frankel and Maine’s senior Loryn Porter. Additionally, she only gave up more than two goals in a start five times this season, three times at the hands of the Huskies.

“The first thing is they have strong goaltending… So, we need to make [Abstreiter’s] night difficult,” Flint said. “We need to get pucks to the net, bodies to the net, take away her eyes and be strong on our sticks around the net and take advantage of any opportunities that we have.”

Northeastern has played the Friars to a 3-0-0 record and a 13-1 goal differential this season, giving Husky fans confidence for Saturday’s championship bout. NU played those games without top-line redshirt junior right wing Maureen Murphy, who will be able to play in tomorrow’s contest, giving the Huskies an extra boost. Murphy was named a Hockey East third-team all-star and hung up a 5-10-15 line and +22 rating in 12 games this year. The game will be Murphy’s first contest against the school she transferred from, but Flint said that isn’t a major point of discussion in the locker room.

“[Murphy is] just an all-around outstanding player, one of the best players in the league and it only makes our first line stronger when she’s on it. [She] makes our first power- play unit better, our penalty kills better, so she makes our team better in a lot of different areas,” Flint said. “On top of that, she makes players around her better, so it makes a big difference when she’s in the lineup.”

Providence’s top skater is junior forward Sara Hjalmarsson, the type of skater that “makes a team go,” as Flint would put it. Hjalmarsson tied for seventh in Hockey East for points this season with a 5-12-17 line in 19 games and made the Hockey East All-Star Second-Team. Hjalmarsson was held off the scoresheet in Providence’s three games against NU this year and hasn’t scored since mid-January, but she has scored 68 points in 90 games for the Friars.

On the blueline, the Friars boast some strong youth, with freshman defenders Brooke Becker (3-11-14 line in 19 games) and Claire Tyo (3-8-11 line in 19 games) both named to the Hockey East All-Rookie team. Tyo was also the lone Friar to score against NU this year. Sophomore defenseman Lauren DeBlois made the Hockey East All-Star Third-Team for her efforts this season, pairing strong defense with a 4-3-7 line in 18 games.