In a school year unlike any other in Northeastern history, an in-person college graduation ceremony seemed out of the question. However, on Saturday, May 8, Northeastern’s class of 2021 got just that: an outdoor commencement at Fenway Park.

Though the commencement was held in person and outside, there were restrictions and physical distancing requirements in place. All those who attend were required to fill out a health survey prior to entering the stadium, confirming that they had no symptoms and had not recently tested positive for COVID-19. Seats for the graduating students were set up six feet apart in what normally would serve as the outfield, and masks were required for attendees.

Students were also split between two ceremonies, with one starting at 9 a.m. and the following beginning at 2 p.m., and the university granted each student only one guest ticket, a fact that some parents disliked.

“I feel bad, after five years of school only one parent gets to see him graduate,” said Ann Klein, who flew from Akron, Ohio with her husband Barry to watch their son graduate. The Kleins allowed their son to decide who would get the guest ticketed, and Ann ended up with the spot.

“I’m okay with waiting from outside,” Barry said. “I just had hoped the Bleacher Bar was going to be open.”

Northeastern President Joseph E. Aoun kicked off the events speeches, describing the ceremony as a metaphor for a school year underscored by the COVID-19 pandemic.

“A college education has always involved passing tests, but your class has to be the most tested in history,” Aoun said. “Of course, I’m talking about COVID tests.”

Aoun also thanked students for their role in curbing the spread of the virus on campus. He shared stories of his encounters at Northeastern during the pandemic and the resiliency the students had shown despite the unprecedented school year.

“I want to thank the entire Northeastern community, especially our new graduates, for making this past year successful,” he said. “You agreed to take certain steps. In exchange, you paved the way for a successful, uninterrupted school year.”

The student speaker Nathan Louis Hostert also recognized the hardships the class endured and the impact the pandemic had on the students graduating.

“I think it’s important that we acknowledge how so much of what we’ve been through over this past year sucked,” said Hostert, a political science major. “Every single one of us has been hurt by this pandemic in our own way.”

However, Hostert also pointed out the opportunity the pandemic provided, calling on his fellow graduates to use their experiences over the past year as motivation to improve the world around them.

“Over the past year, we were forced to reckon with all of the flaws in that ‘normal’ that we’re used to,” he said. “What an opportunity we have then, to go out and fix those problems that are still deeply ingrained in our policies, in our communities, in our industry and also in ourselves.”

When Northeastern announced that graduation would take place in-person, students were delighted, albeit surprised.

“I’m super excited,” said Swati Joshi, an economics and mathematics major who finished her courses in December of 2020. “I was definitely skeptical it was going to happen, even when they announced it.”

For some, like Carolina Bellani, a combined economics and business administration major, the celebration offered an opportunity to reconnect with friends and classmates they had not seen since before the pandemic.

“I’m expecting to see some people I haven’t seen in over a year, so I’m excited to see everyone,” she said.

In his remarks, Baker recognized the challenges those graduating have faced since March of 2020 but said he thought the fact the ceremony could take place in Fenway Park was “kind of a cool thing.” The historic stadium has taken on various roles during the pandemic, acting as both a vaccination site and now as venue for graduation ceremonies for multiple local colleges and high schools.

The graduation ceremony concluded with a jazz performance from Zeke Martin, a drum instructor at Northeastern, and his band, and final remarks from Aoun, once again addressing the graduating students regarding their future.

“Northeastern is your lifelong home,” he said. “Go forth, create, innovate, make change and always keep the music of Northeastern in your hearts.” 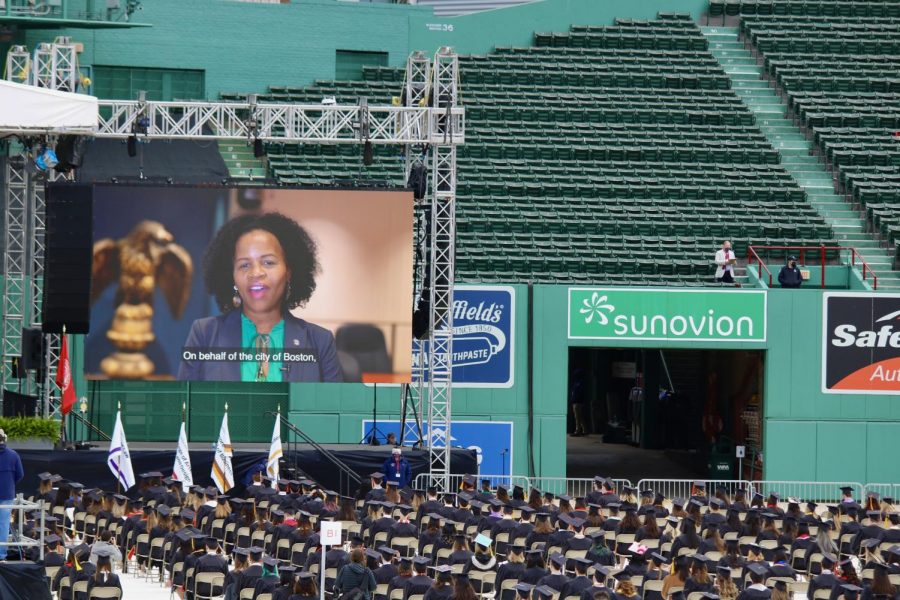