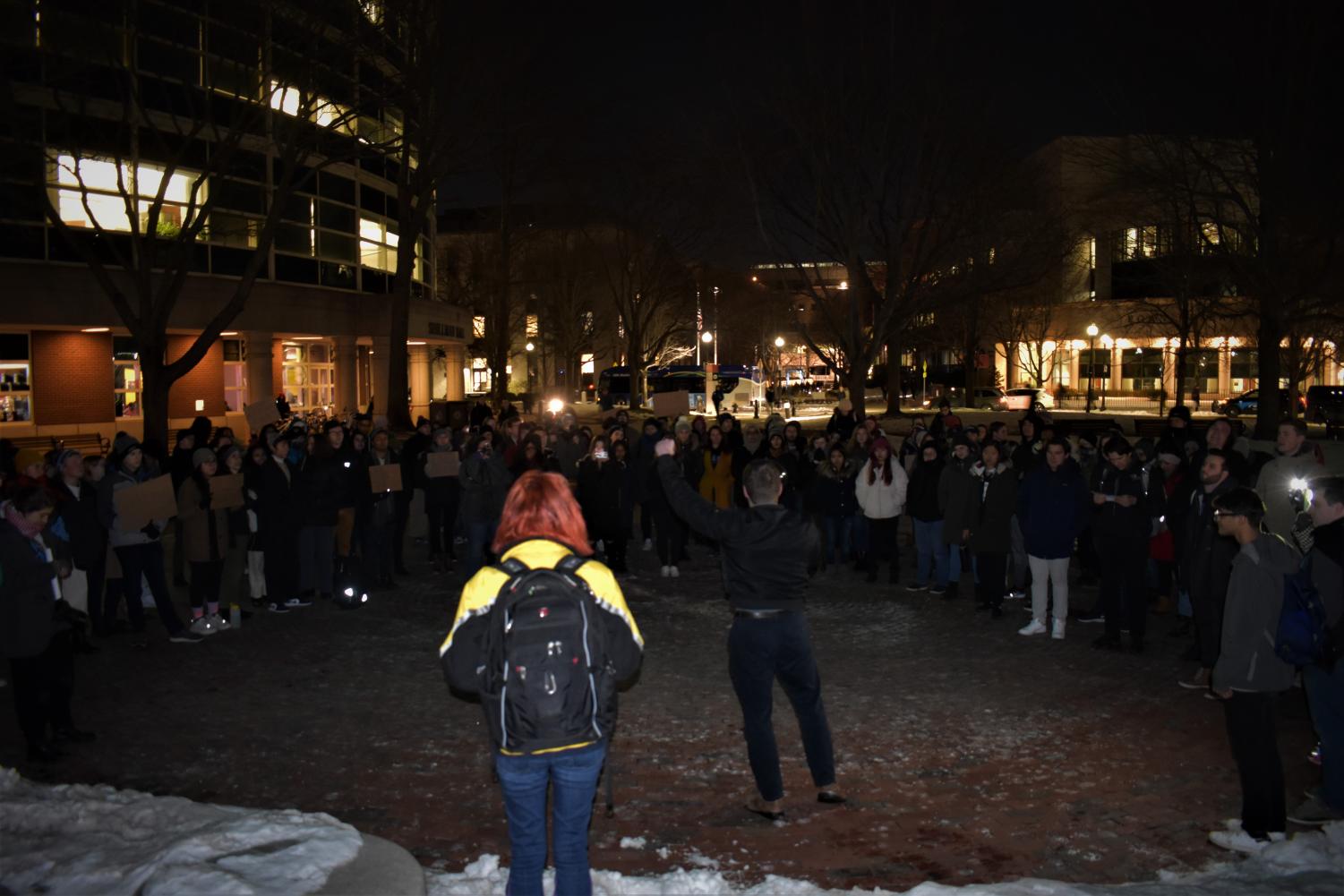 The Northeastern community responded swiftly to the situation, with over 100 students and local activists showing up on Centennial Common Tuesday night to protest the deportation. (Kelly Chan)

As classes have begun for the spring semester, one student in particular, Mohammad Shahab Dehghani Hossein Abadi, will be unable to attend. The 24-year-old economics major was detained and later deported from Boston Logan International Airport Monday, sparking outrage from Northeastern students and local activists.

“We showed up at Logan Airport [Monday] night as soon as we heard the news — about 10 or 15 of us went out there in solidarity,” said Dru Maxcy, a local activist and member of the Act Now to Stop War and End Racism Coalition, or ANSWER. “We don’t want any more war and we want to stop war and end racism.”

Abadi had returned to Iran to renew his student visa. Despite the fact that he had obtained an F1 student visa upon his return, he was still taken into custody and questioned by U.S. Customs and Border Protection, or CBP, according to his attorneys. Monday night, an emergency hearing was issued in order to allow Abadi to remain in the United States for two more days so that he would be able to attend a hearing Tuesday morning.

The hearing documentation asserts that Abadi was given a Certificate of Eligibility for Nonimmigrant Student Status from Northeastern, had completed all parts of the visa process, including extended background and security checks in which no criminal activity or threats were found, and was given his visa one week prior to the incident. Despite the call for the hearing the next day, CBP sent him to France that night.

Judge Richard Stearns, who was due to be the judge in Abadi’s trial, said no more could be done, as Abadi had already been removed from the country. He believed that there was nothing to reverse the course of action taken by CBP.

Northeastern explained in an article that they are working to obtain an explanation as to why Abadi was removed in opposition to the request for a hearing. Jigisha Patel, Northeastern’s chief advisor for International and Immigration Services and assistant general counsel said the school has been in contact with Customs and Border Patrol for answers, but they have not been responsive.

“We believe that a clear explanation is needed, especially because the deportation took place after a 48-hour extension was granted by a federal judge,” said University Spokesperson Renata Nyul in a statement to various news outlets.

Kate Parks, a fourth-year marine biology major, organized and led the protest. “I thought someone should have an event, so I figured I would just do it,” Parks said. “It makes me feel sick and unspeakably angry. I think that it’s really important that Northeastern as a community speaks out against this and says, ‘This isn’t okay and this is a horrible, unjust, racist practice.’”

First-year students Amir Bagheri and Camron Nodoushani said Abadi’s situation hits home for them because they are Iranian. “It was very sad to hear that a fellow student got deported for no reason other than the fact that he’s Iranian,” said Bagheri, a data science major. 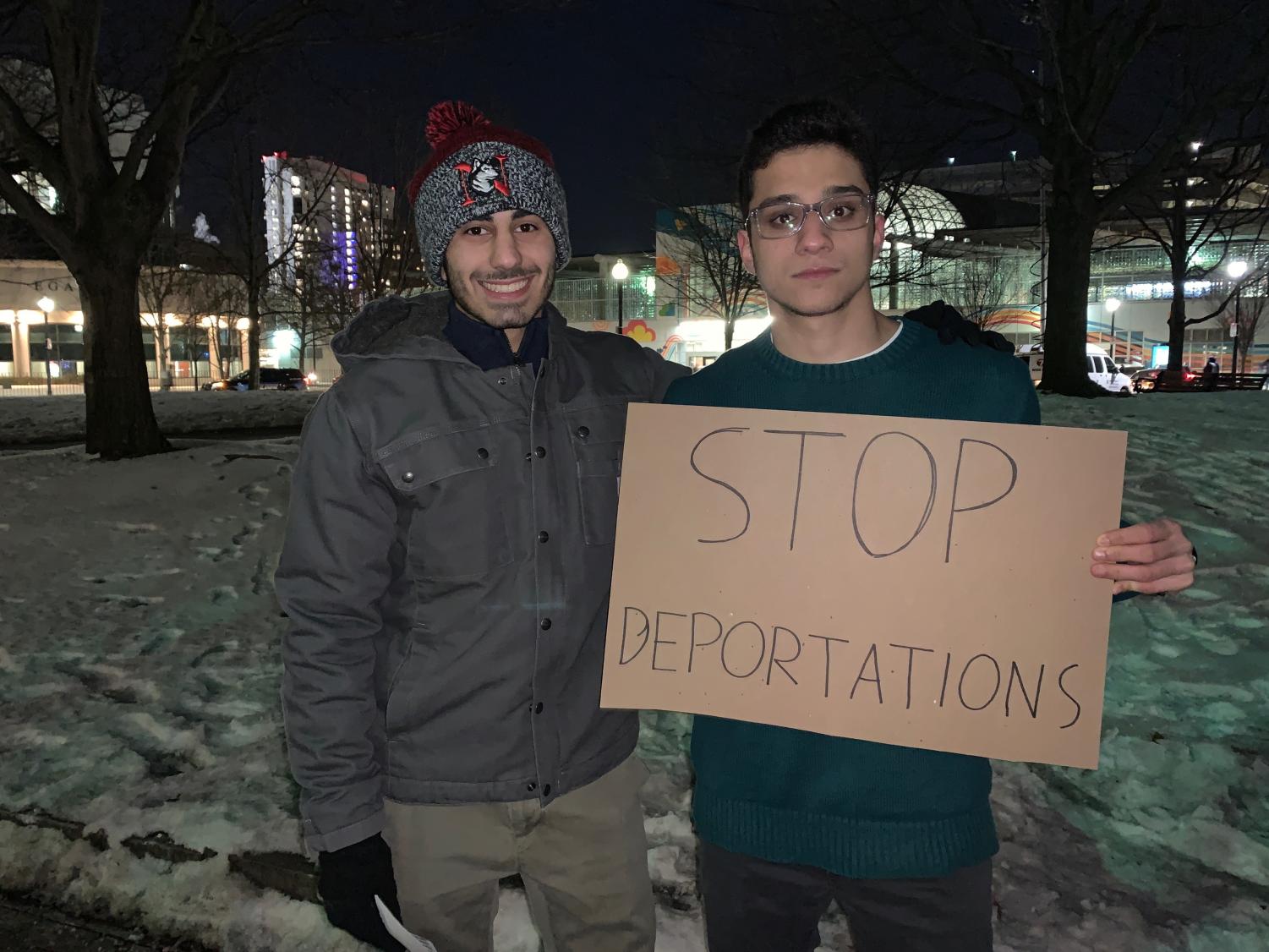 Various students took the megaphone to speak during the protest and led the crowd in chants such as “let him in” and “education, not deportation.”

James Robinson, a PhD candidate and professor of history, said he came to protest because of the illegality of the deportation. “I think you have to follow the laws and the people who deported the student didn’t follow the law. The judge told them there was going to be a two-day stay,” Robinson said.  “And the anti-international rhetoric is really concerning to me, amongst other things.”

Students demanded action from the university at the protest, urging them to take strong action to help Abadi.

“We’re here in solidarity against [President Donald J.] Trump’s xenophobic policies that have unfortunately impacted one of our own students who was just trying to get his education at the university that he deemed to be prestigious,” said Morgan St. James, a fifth-year psychology major. “As President Aoun is not native to this country himself, we’re hoping that some action is getting taken — it sounds like some is —  and that the university will fight for their students.”