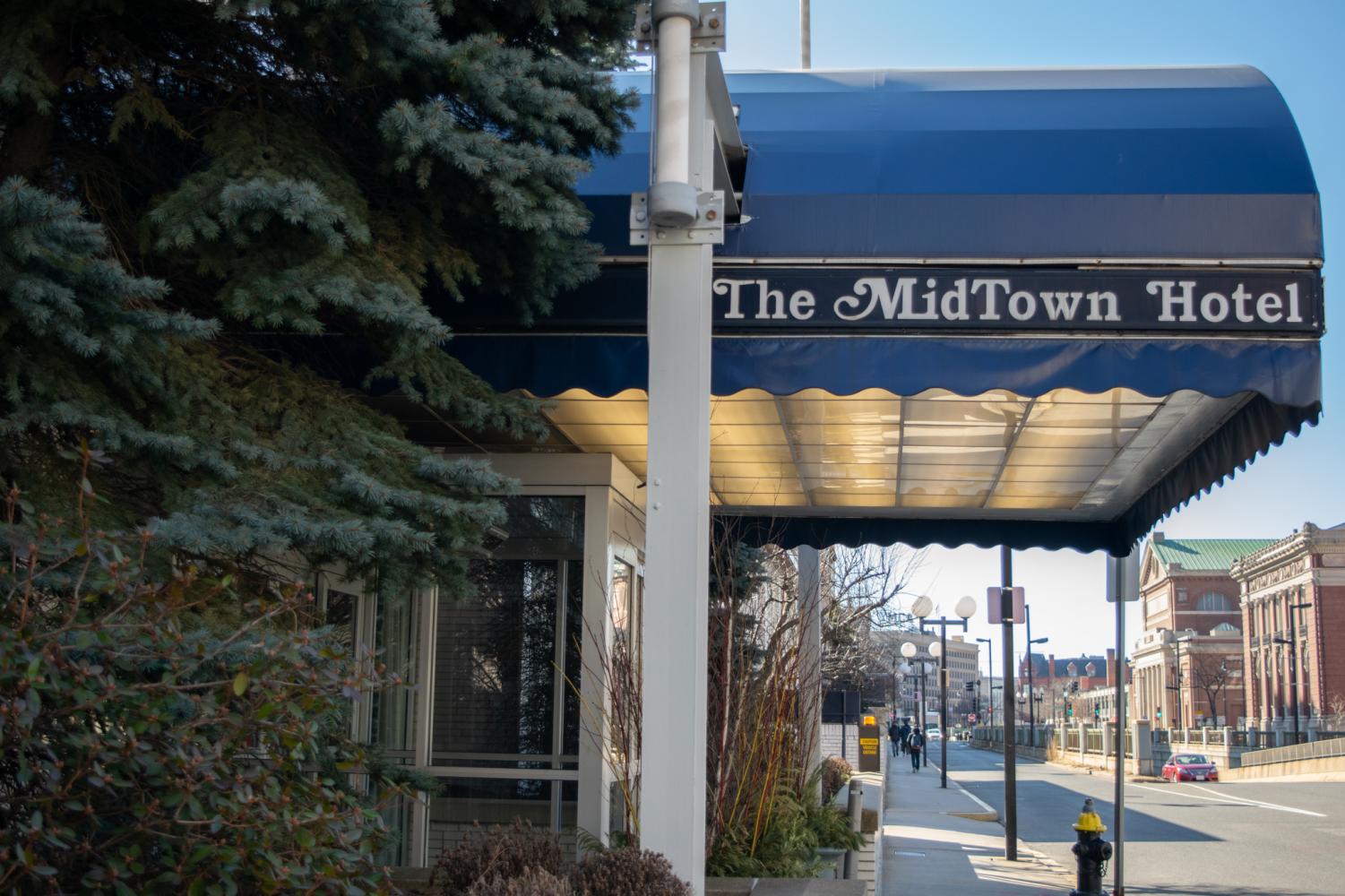 Northeastern filed a proposal with the city to use 149 rooms in the Midtown Hotel as student housing. (Kelly Thomas)

Northeastern filed a proposal with the city to use 149 rooms in the Midtown Hotel as student housing.

Students were placed in the Midtown Hotel, despite past assurances that the hotel would no longer be a housing option. About 80 upperclass students coming back from co-op and study abroad were temporarily housed there in January.

Northeastern first used the Midtown Hotel for student housing in the spring semester of 2018, when 60 N.U.in students were placed there. Since then, the hotel has been home to more N.U.in students, as well as first-years in the ContiNUe program, transfer students and upperclassmen returning from co-op or study abroad.

“The university leased additional beds at the Midtown for the month of January for about 80 upperclass students assigned there temporarily while they are waiting for space on campus that may open up as a result of cancellations or withdrawals,” university spokesperson Mike Woeste wrote in a Jan. 27 email to The News. “Most of the students who stayed at the Midtown have now received their assignments and the university has provided moving support for them over the past couple of weeks.”

When students were first housed in the hotel, there were concerns over distance from campus, as well as lack of amenities such as Northeastern WiFi and laundry machines. However, students who were housed there temporarily in January had few complaints about the logistics of living in the hotel, including locations and accommodations.

“I have no issue, it’s pretty cool,” said Justin Harvey, a third-year business administration major who temporarily lived in Midtown until on-campus housing opened up. “I’d be fine living here the whole semester.”

In a January 2018 town hall, Francis Bourgeois, the director of Northeastern Housing Services at the time, said that housing students in the Midtown Hotel was a “one-semester thing,” and that “there are no plans or discussions as we sit here now, at least at my level, for Midtown to be an option in the future.”

However, Northeastern has continued to use the Midtown Hotel for student housing, both temporary and semester-long.

Zhanna Sheyner, a first-year bioengineering major and ContiNUe student, said she likes the space at the hotel.

“I have a single with a lot of space, which is better than a lot of the other first-year housing options,” Sheyner said.

The hotel’s distance from campus raises concerns for some students, as it sits just beyond the Symphony MBTA stop.

“The walk is inconvenient, but you just have to give yourself five extra minutes in the morning,” said Sam Sagherian, a first-year mechanical engineering major in the ContiNUe program. “It’s a really good location, we’re so close to the Pru[dential Center].”

Security is more relaxed at the hotel compared to residence halls, without a requirement to check in with a proctor to access the building or sign in guests.

“I haven’t had any problems with the lower security,” Sheyner said, mentioning the ease with which she can come and go with friends.

Meghan Barber, a second-year biochemistry major, chose to live in the Midtown Hotel as a resident assistant after being in the ContiNUe program during her first year.

“I wanted to be a kind of role model for other ContiNUe students because I was in the program last year,” Barber said. Most of her residents are students in the ContiNUe program, as well as temporary residents arriving on campus from N.U.in. “Spots open up for N.U.in kids so they move around.”

ContiNUe students live together in the Midtown Hotel as part of a living learning community during their first year, with the option to commute if they live nearby. “They try to make it a tight-knit group of kids for connections later on,” Sagherian said of ContiNUe students being housed together.

The ContiNUe program’s admissions website states that “beginning in the Summer I 2020 term, students may participate in the housing process for transfer students, for which university housing is not guaranteed,” raising questions about the program’s future use of the Midtown Hotel. A university spokesperson did not respond to request for comment on this.

Efforts are being made to alleviate housing pressure at Northeastern. LightView apartments, which opened this past summer, added 825 living spaces for Northeastern students. American Campus Communities Inc., the company which owns and operates LightView, is collaborating with Northeastern again to build a new 26-story mixed-use building at 840 Columbus Ave., with construction starting in 2021.

For the students housed in Midtown temporarily, their stay at the hotel has ended. “All undergraduate students were able to successfully move into their assigned housing,” Woeste wrote.