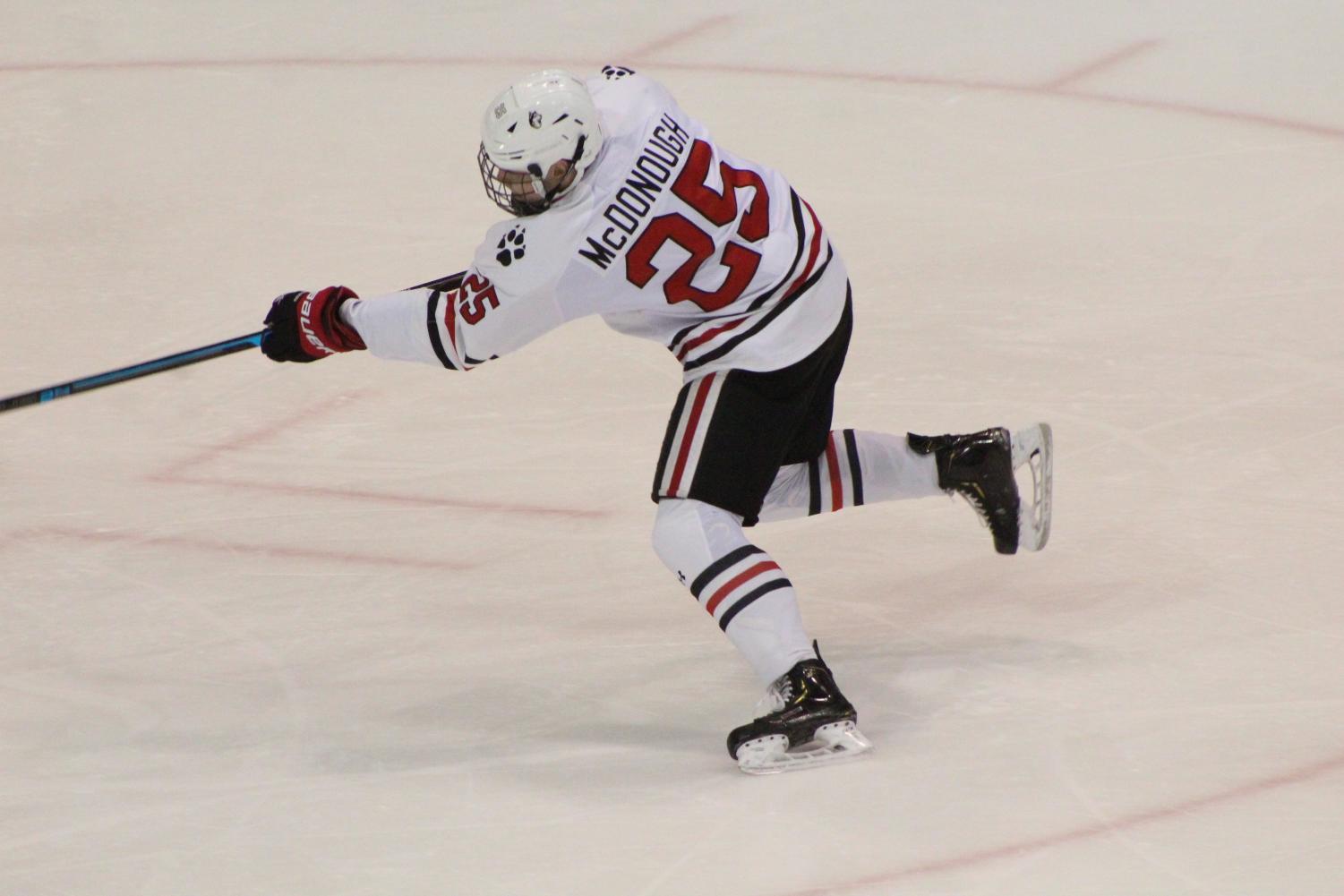 Sophomore forward Aidan McDonough and the rest of the men’s hockey team look to start strong against Merrimack this season. (Sarah Olender)

Sophomore forward Aidan McDonough and the rest of the men’s hockey team look to start strong against Merrimack this season.

Men’s hockey preview: In an unpredictable season, the Huskies plan to take it one game at a time

On the first day of every preseason, the Huskies establish their goals for the season: win the Beanpot, win a Hockey East Championship and win a national championship. Already, their goals for this season have been challenged by the unpredictability of the pandemic. While Beanpot 2021 is no longer a possibility, the team’s spirits remain high as they look to finally play their first game of the season Dec. 12.

As they prepare to take on Merrimack in the first game of a home-and-home series, the team has been getting more physical in practice.

But Merrimack is not the only team with more skill this season. With a longer preseason, both old and new Huskies have been able to develop their skills during practice.

“I definitely think the pandemic has helped guys figure out their priorities and what they need to really focus on,” said senior forward and captain Zach Solow. “Because if you want to play you got to do the right things, and it’s clear everyone on this team has done that.”

With many new freshmen and a strong group of sophomores, this year’s team is especially skilled and agile.

“I think every freshman so far has demonstrated that they’re extremely skilled and they’re a really good group to work with, and you can tell they want to be better every day,” said redshirt senior forward and assistant captain Grant Jozefek. “I’m really excited for everyone to watch our team this year. They got a lot of speed, they play hard and they have a lot of skill, too, so it’s kind of a rare combination.”

Still, returning players that brought a lot to the ice last year are anticipated to step up even more this season.

Sophomore forward Matt Demelis played in all 34 games as a freshman last season, scoring 13 points and ending with the top shot percentage on the team (.308). Other standouts include sophomore forward Aidan McDonough, who contributed 27 points during his first season — 9 of which were power-play goals, as well as junior defensemen Jordan Harris and Julian Kislin, who Madigan notes have been leaders in practice because they understand the team’s identity.

As the team heads into a season where no game is guaranteed and prioritizing health and safety is more important than ever, they are simply taking it day-by-day.

“With these new, crazy circumstances, you can really only prepare for the game upcoming because you never know when they’re going to pull the plug on it,” Solow said. “So we’re real focused on getting to this first game and getting the first one under our belt.”

The Huskies are no stranger to game cancellations. Their season was supposed to start two weeks ago with the first game in a home-and-home series against UMass Lowell taking place Nov. 27, but all NU winter sports’ games and practices were postponed due to an outbreak of COVID-19 cases on five of the Northeastern varsity teams, including the women’s hockey team.

“We’re here for two-and-a-half months, no [COVID-19] cases, no [COVID-19] positives, everyone on the hockey team is doing the right thing and then the university makes that decision to not let us play. But they let us play two weeks later, this upcoming weekend,” Solow said. “Looking back on it, it’s just a little bump in the road. You’re upset in the moment but you get over it real quickly when they come back at you with a schedule saying we’re going to start two weeks later just to … ensure everyone’s safety.”

While the team anticipated being out of practice until Dec. 18, they were able to return a week earlier by staying in their own bubble and remaining clear of any COVID-19 cases.

“I know when we got delayed the other week when we were supposed to play against [UMass] Lowell, I know a lot of guys were upset, a lot of guys were frustrated, including our coaching staff, everybody, because we feel like we’ve been doing the right things and we didn’t get a chance to play so it was really unfortunate for us,” Jozefek said. “But we stayed positive and honestly it kind of came quickly together, the next few weeks. So now we’re ready to go.”

The team is looking forward to the challenge that comes with competing against any Hockey East team, especially BC and BU, who the Huskies defeated in last year’s Beanpot when they secured their third win in a row. BC proved themselves to be tough competitors last season. In a home-and-home series Feb. 20 and 21, the Huskies were swept by the Eagles, finishing 2-3 and 1-10, respectively.

While the strength of their opponents might be the same, the energy in the stadium will not, as no fans will be allowed to spectate in Matthews Arena.

“We’re really looking forward to playing,” Jozefek said. “It’s sad that the fans can’t come out and see us play but we know they’ll be watching on their laptops or TVs or at a restaurant for dinner.”

With the support of their fans and their goals in mind, the Huskies are ready for action. To those anticipating watching the team play, Solow said, “Be excited for a fast, skilled, hungry, young, energized team this year.”