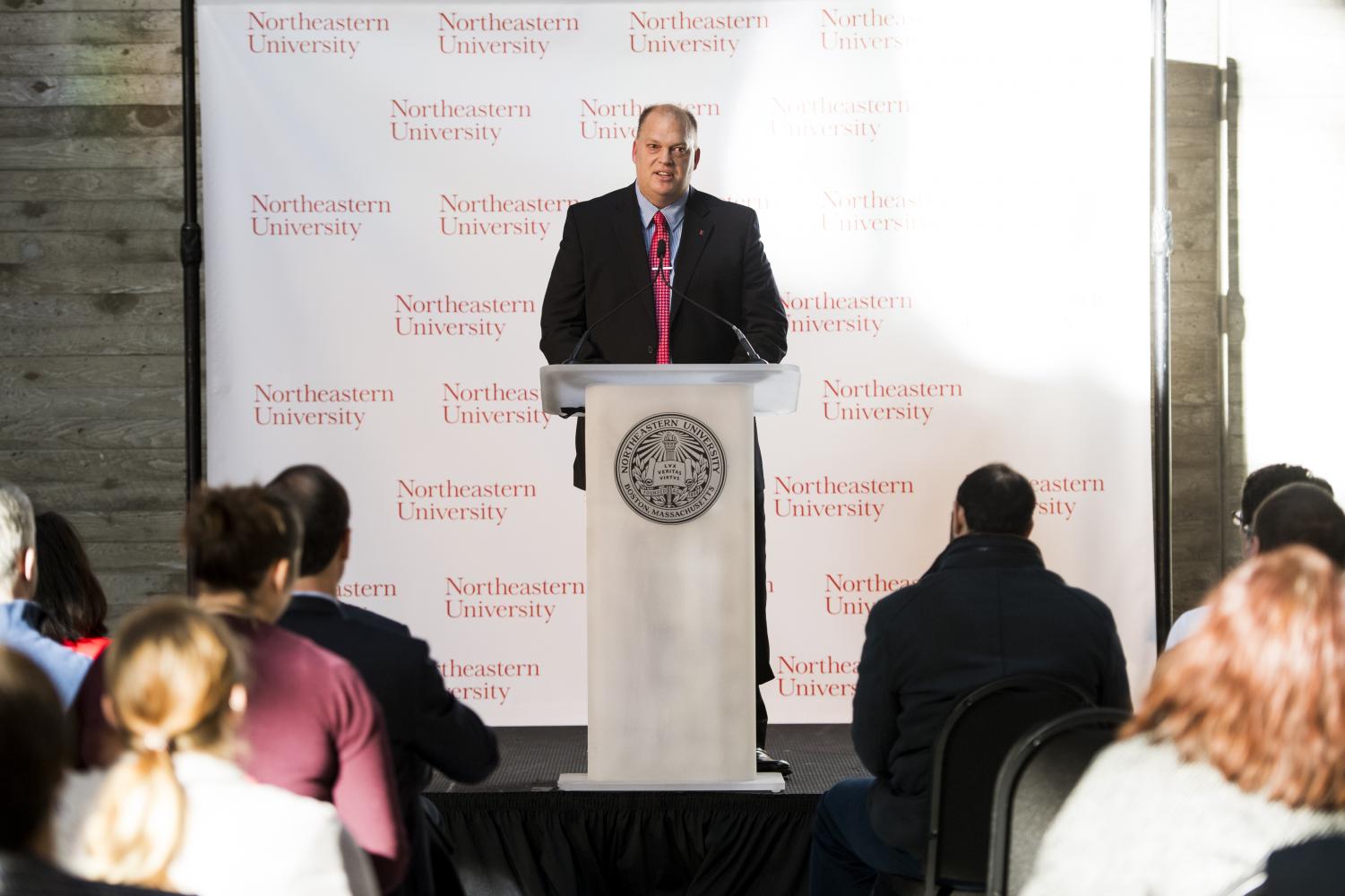 Northeastern director of athletics Jeff Konya is one of 26 committee members focused on spreading awareness and improving diversity in hockey.

Hockey has historically been a predominantly white sport with marginal amounts of diversity compared to other sports such as baseball or basketball, but College Hockey for Diversity, Equity and Inclusion, or College Hockey for DEI — a new initiative launched this month by 26 members of the 11 college hockey conferences — is looking to change that.

The organization announced their creation and the launch of their website Feb. 10 in a virtual press conference. Their mission is to promote cultural change in the sport of hockey via four avenues: communication, education, allyship and advocacy.

“To be a transformative leader and change agent, I felt compelled to enter the national discussion for a sport that means so much to our Northeastern community,” said Jeff Konya, the Northeastern University director of athletics and College Hockey for DEI committee member, in the opening press conference. “Fortunately there were many across the collegiate hockey landscape that shared my passion and our collective departments’ impetus for trying to make a difference one shift at a time.”

The group said that there has been a need for this type of initiative for a long time, citing hockey’s overwhelmingly white demographic makeup and the importance of continued discussion and action within locker rooms. Members of the Northeastern men’s hockey team felt the group was a step in the right direction as well.

“[The committee’s] using college hockey as a platform,” said sophomore defenseman Jayden Struble. “That’s more of the bigger picture…it is good that it’s focused on communication and resources throughout their slogan and campaign. I think that they’re on the right track and it’s good to see them taking strides in an active effort to try to help things out.”

Konya’s inclusion on the committee adds to the number of initiatives the university’s athletic department has taken to increase diversity since the killing of George Floyd in May 2020. The department worked with athletes to create the Northeastern University Black Athlete Caucus over the summer and has put out numerous messages in support of persons of color.

For players like Struble, the efforts of Konya and the committee show an effort to promote real change.

“[Konya] reached out to me a couple months prior and recently, when he actually accepted the position, just to let me know like, ‘Hey, your words you shared was a big reason why I decided to take up the committee,’” Struble said. “It means a lot because he is at the top of our athletic department and he represents us and me, so it’s really nice to see…he’s definitely been doing a great job with all this.”

Back in June, at the height of the Black Lives Matter movement, Struble went viral on Twitter when he spoke out in support of social change and called teammates, coaches and fans to action. His words and the ensuing discussions between his teammates and coaches opened their eyes to the real issues that Black people face on the ice and off it.

“We had a team Zoom just talking about the struggles around Black players in hockey and minority players in hockey. Just having that open discussion led to a learning opportunity for myself and I’m sure our other teammates as well,” said Jordan Harris, assistant captain and junior defenseman.

The meetings the team had were similar to meetings happening in and between locker rooms across the country. College Hockey for DEI formed because of these types of conversations — players, coaches and league leadership members all worked together to find a way to make a positive impact on the entire hockey landscape.

“[The commissioners] had some really honest conversations and there was a commitment right away from all of us that this needed to be something that everybody was bought into,” Flowers said.

The creation of this committee does not mean that the work is done, however, as they still believe that there are issues that need to be addressed. One of these problems, according to Struble, is racism that players face.

“Honestly, it starts with just racism as a whole just being eliminated first when you talk about making people feel comfortable, and then diversity; maybe we’d have more people of color play the sport,” Struble said. “It is obviously predominantly white and I don’t think it has to be…I definitely could see some more faces in the game.”

For Struble, he sees that Black players are turned away from the game at a young age and are told that the sport is not for them. Without equal opportunity and encouragement, minority players won’t feel as compelled to continue and ultimately make it to the collegiate or professional level.

“It’s when you’re growing up and you’re getting told, ‘Stick to basketball,’ or something like that, and I feel like a lot of people maybe just do,” he said. “They’ll pick another sport or shy away from [hockey] because of the social implications of it; I think that more of that ‘Hockey is for everyone’ slogan, just hammering that home, it starts with that.”

NU men’s hockey head coach Jim Madigan, while not a part of the committee, believes that this type of initiative can help make hockey more diverse but also thinks that every sport needs a similar organization. In terms of changes, he said that it really starts with giving opportunities to those who might not receive them often.

“The more awareness and education we can have around [diversity] I think is really good and hopefully then it enables us to attract more people of color to play the sport,” Madigan said. “One of the things we’ve talked about here at Northeastern hockey is being involved in some youth programs and groups that are here around the Boston area that are based on more representation of African Americans and Latinos.”

College Hockey for DEI knows that the issue of diversity and inclusion is complex and difficult to tackle, so they are trying to take it slow and move forward step by step.

“We believe our collective voices and our unique ability to work together as a sport provides us an opportunity to make a difference,” Flowers said. “We will approach this challenging and necessary work just like we play our game: one shift at a time.”