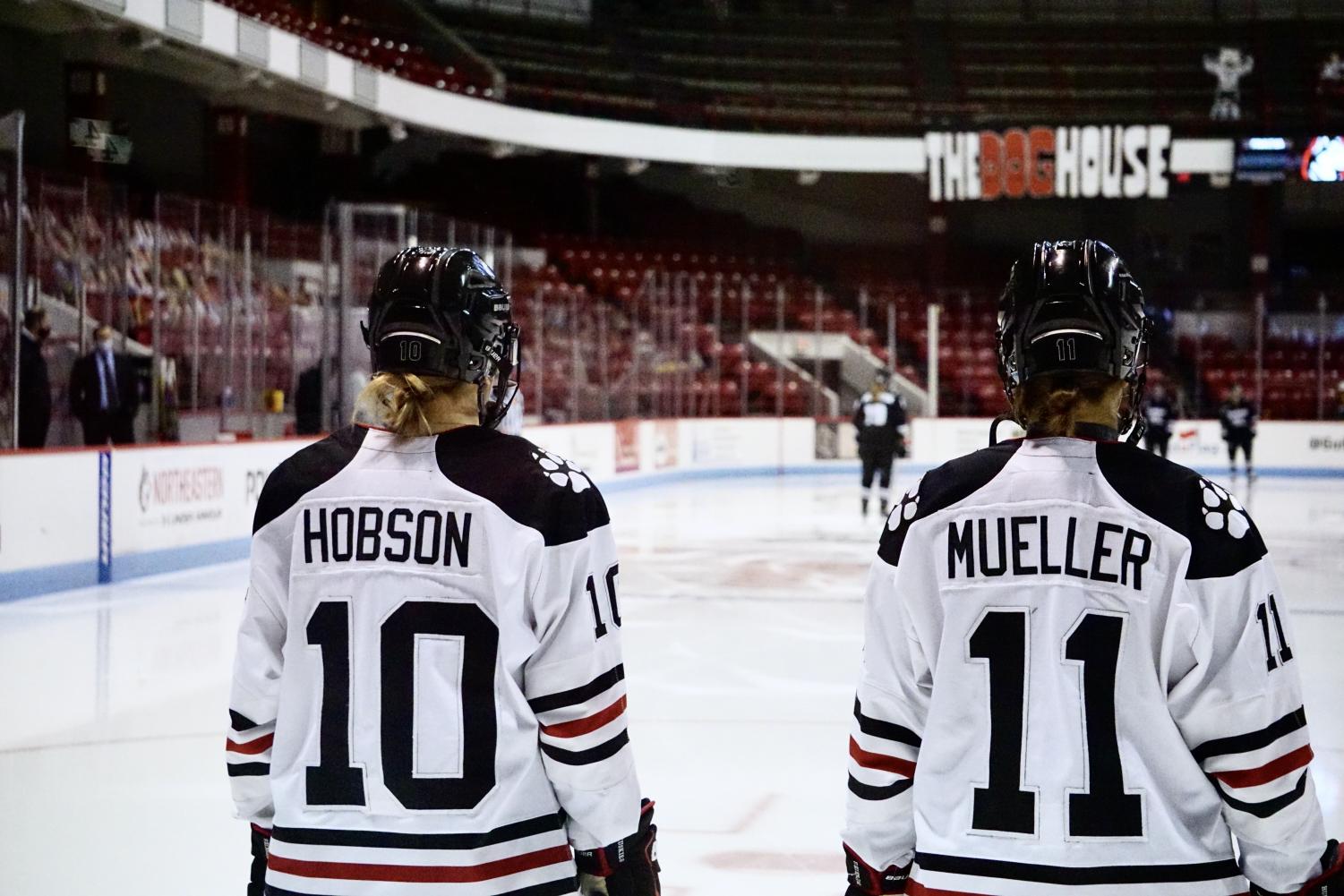 The Huskies will play their NCAA quarterfinal matchup with Robert Morris Monday at 2 p.m. (Ethan Wayne)

The Huskies will play their NCAA quarterfinal matchup with Robert Morris Monday at 2 p.m.

No. 1 women’s hockey draws No. 8 Robert Morris for NCAA quarterfinals

It’s a year “late,” but the No. 1 Northeastern women’s hockey team is ready again to push for a national championship. After their tournament quarterfinal against Princeton University was cancelled last year, NU has a chance for some form of redemption against No. 8 seeded Robert Morris University Monday afternoon in Erie, PA.

“I think [last year’s cancellation] is in the minds of all our returners, and there’s obviously something to prove. They felt like a really good opportunity was taken away from them last year, so they want to make good on it this year,” said head coach Dave Flint. “That’s definitely been in their thoughts.”

That need for redemption is doubled as NU’s (20-1-1, 20-1-1 HEA) last tournament game ended in heartbreak with No. 6 Cornell dropping the Huskies 3-2 in overtime at Matthews Arena. Unfortunately for NU, junior center Alina Mueller missed that contest with a broken hand, but now the Olympian can add another big-game to her resume.

“Alina gets excited for scrimmages, so for her, she’s just excited to play. Obviously, it’s a big game, and she’s been on the big stage many times,” Flint said. “She knows what it takes; she’s not going to be the least bit phased or rattled. I think her demeanor and her poise will rub off on some of the players that might be nervous.”

The Huskies are on a 20-game unbeaten streak, the school’s best since NU’s undefeated 1987-88 season. They’re coming off their program record fourth-straight Hockey East Championship via a 6-2 defeat of the Providence Friars for their coinciding fourth-straight national tournament appearance. Their 20-1-1 season earned them the program’s first No. 1 seed in the tournament, priming the Huskies for their first NCAA tournament game win in program history.

As usual, the Huskies cleaned up during awards season, with Flint bringing home Hockey East Coach of the Year honors and Mueller and senior goaltender Aerin Frankel sharing the Hockey East player of the year. Mueller, Frankel and senior defender Skylar Fontaine are all top-ten nominees for NCAA college hockey’s top individual award, the Patty Kazmaier Award, and Frankel is a top-three candidate for college hockey’s national goalie of the year award. Their recent run as a team has been historic: In the last two seasons, NU has a NCAA-best 52 wins in their past 60 games.

On the other hand, Robert Morris University (16-7-1, 11-7-1 CHA), a member of the College Hockey America conference, is coming off their third CHA Championship win in program history and their first since 2017. The Colonials lost in the CHA Championship the three years prior, making their most recent win a redemption game for the team’s seniors.

Northeastern hasn’t played RMU since a 2-2 tie during the 2014-15 season, with former Husky and NU legend Kendall Coyne as the most recent Husky scorer against the Colonials.

“It’s a little tougher to prepare when you haven’t seen an opponent in a while. [We’ve] got one video of them, and it was of their last game, and I think they had like 30 seconds of a power play,” Flint said. “This time of year I don’t think it really matters who you play or how much you’ve seen that opponent. I think it comes down to if your team is ready and if they play their best.”

From what Flint can determine from his limited film of the eighth seed, the Colonials are a slower, physical team with some size; a style reminiscent of the UNH Wildcats that tied Northeastern in January. Since that tie, NU has been able to utilize its speed against any and all opponents, making it hard to imagine Robert Morris’ particular brand of physicality slowing them down.

“We got to play with speed, that’s our MO. If we don’t, then we’re not as effective… I think [RMU] is going to try to slow us down, and if we slow down and play at their pace, then that’s what they want and they’re going to have a good chance,” Flint said. “If we play with our speed and have all four lines going, I think we’re going to be in pretty good shape.”

Along with their physical style, RMU is a “pucks on net” team, with their most notable performance of rubber flinging coming in a ridiculous 1-0 win over Sacred Heart (1-10-0) in February where the Colonials notched 73 shots on net but just scored one goal. Sacred Heart’s goaltender for that game was junior Frankie Sanchez, who finished the season with a 1-9-0 record, .911 save percentage and 4.55 GAA, making the 72 save performance quite the anomaly.

“One of their lines really makes them go, but the other ones really work hard,” Flint said. “They generate a lot of shots… They’re a team that will get pucks to the net. They’re going to create traffic, and work hard and grind it out. We need to be ready to compete in our own end.”