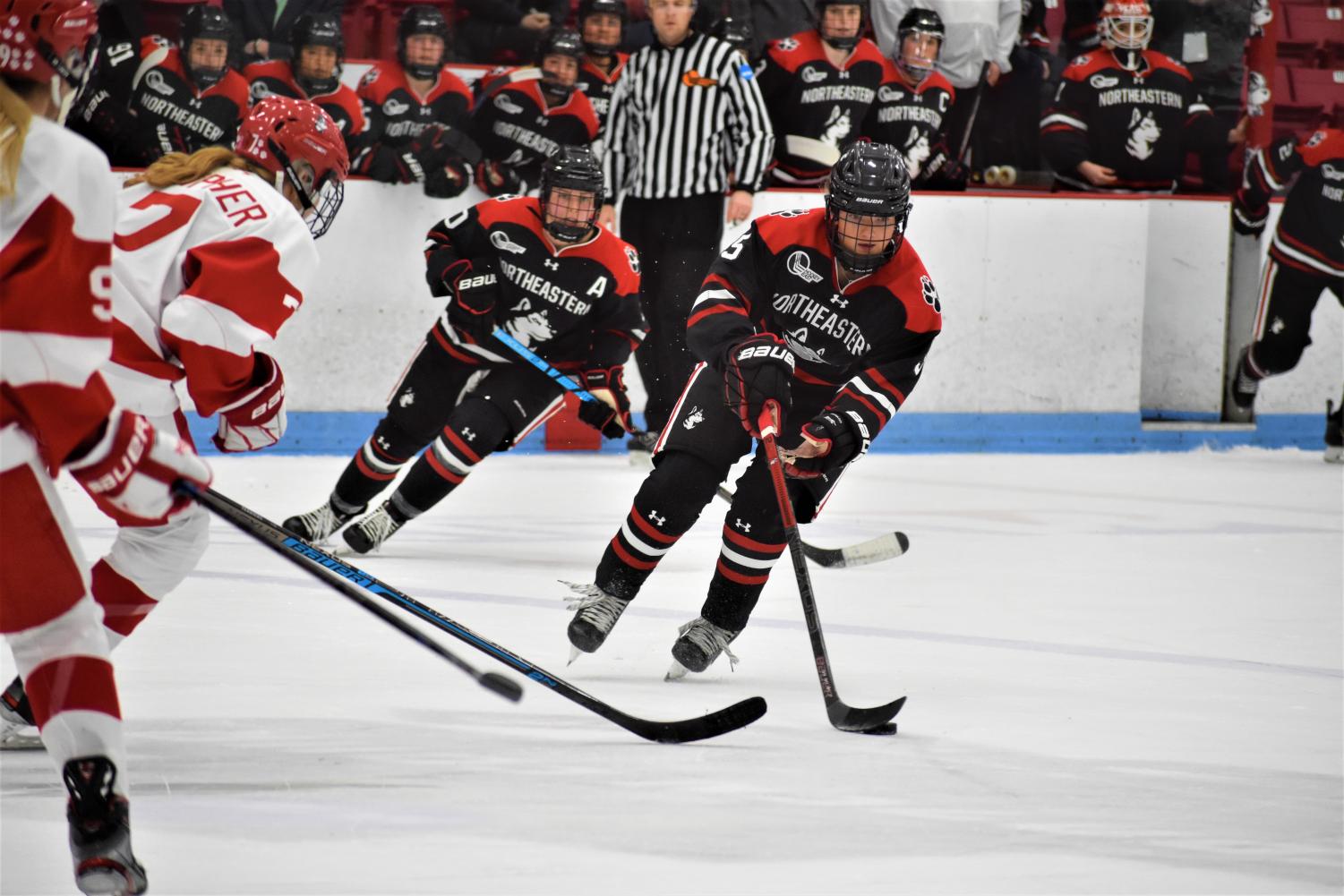 The women’s hockey team is set to play their first game of the winter season against Boston College on Friday. (Kelly Chan)

The women’s hockey team is set to play their first game of the winter season against Boston College on Friday.

The reigning Women’s Hockey East Champions have similar faces and the same goal, but very different circumstances. After a resounding 9-1 victory in last year’s Hockey East Championship, the team had their sights set on a national championship. The COVID-19 pandemic robbed them of pursuing that in earnest, but the Huskies are locked and reloaded with their sights once again set on the highest crown in college hockey.

Last year’s group of Huskies was nothing short of remarkable, setting a program record for wins in a single season. Bringing that strong group back, plus adding a few more freshmen to the mix, gives Flint, senior blueliner and captain Brooke Hobson and redshirt senior forward and alternate captain Andrea Renner the confidence that their ceiling remains as high as it was the last time they hit the ice.

“All our big players are returning. We lost some good leadership last year to graduation, but as far as hockey wise, you got Alina [Mueller], Chloé [Aurard] back up front; you got Skylar [Fontaine] and Aerin [Frankel] on the back end,” Flint said, commending the group as the backbone of the team. “We have a lot of depth, which is nice, and along with the depth, we have experience and kids that have won. That can be invaluable, too. I think it’s much like the recipe from last year, and we’re looking forward to it.”

Hobson and Renner agreed that outside of just the talent on the roster, the Huskies’ experience and maturity would play a critical role in their success this season.

“There’s a lot of talent, a lot of skill and a lot of hard working people on our team. The big thing too is, the minute we stepped on campus, it felt like everyone was buying into what the leadership group was saying,” Renner said. “I think a huge credit has to be given to a lot of those upperclassmen that we have, the juniors, the other seniors and even the sophomores. They understand the winning culture that we’ve created, and it’s not tough for them to follow in those footsteps, because they know what it takes.”

But the team can’t rely on its experience and past success to a point of complacency. In a year that could be full of schedule changes and other non-hockey obstacles, all three members of team leadership emphasized taking the season one week, even one game, at a time.

“Clearly we’ve had success in the past, but we’re trying to build a team that stays humble. We’re kind of being relentless through this whole process and keeping our heads level throughout the whole way,” Hobson said. “[Our experience] is going to help us when we face each opponent, but since we’ve had success in the past, we can’t just assume we’re going to have success now by just breathing through it all.”

The Hockey East championship team from last year included junior forwards Alina Mueller and Chloé Aurard who were among the top scorers in the nation last season, with 66 and 49 points each respectively. Mueller is the reigning Hockey East Player of the Year and was a top three finalist for the Patty Kazmaier Award, which is given to the top player in all of women’s college hockey each season.

Senior defender Skylar Fontaine, who was excellent on the backend, contributed a great deal on offense as well, leveraging her skating ability and speed into 42 points of her own. While the last member of the core four, senior goaltender Aerin Frankel, was top two in the country in goals against average, or GAA, (1.07) and save percentage (.958). The duo, along with the rest of the Huskies’ strong D-core, led the team to the second lowest team GAA in the nation at .97 goals allowed a game, second only to Cornell’s mark of .93.

That group alone is enough to drive a dominant team, but they aren’t the only skilled Huskies on the roster. The team saw major contributions last season from sophomore forward Katy Knoll, sophomore blueliner Megan Carter and junior forward Mia Brown. Knoll brought a strong offensive presence to the second line, where she also showed an extra competitive edge. Carter was extremely impressive on the back end, especially as a first year player, and Flint expects both players to take a step forward with another year under their belts.

Brown took a second year leap of her own last season, emerging as an impactful net front presence with strong chops on the powerplay unit. Flint expects her growth to continue this season as well. Renner, who missed all of last season with a hip injury, is another player Flint expects to add secondary scoring, as she has looked sharp in their practices so far.

Outside of their returners, the Huskies have brought in a few freshmen this year. Flint said he expects freshman forward Ani Fitzgerald to slot onto the top line alongside stars Aurard and Mueller, where left winger Jess Schryver provided a valuable left shot presence last season. He also mentioned Massachusetts native Molly Griffin, another freshman forward, to contribute on the third line. Both Lily Yovetich and Abbey Marohn, two freshman additions to the blue line, are expected to play as well.

Coming into this weekend’s series against No. 10 Boston College, the Huskies’ preparation looks a little different than usual. Flint said that the two weeks prior to Dec. 1, the Huskies weren’t able to hit the ice. Since then, they have been able to start getting small groups together to work on skill drills while socially distancing. Finally, over this past weekend, the team was able to hit the ice together again. Flint said Monday afternoon that they had just begun working on their power play and have yet to begin practicing the penalty kill.

“We really only have had one day of practice with everybody on the ice and doing what we normally do, so this week, it’s a quick turnaround to get ready for BC,” Flint said.

One of the Huskies’ main strengths last season was their penalty kill, coming in with the third-best penalty kill percentage at .913. While it has been a challenge to practice that kill so far, Flint is reassured by the fact that last year’s penalty killers are back, so it will just be a matter of practice.

While the small group sessions aren’t the normal way to get on the ice, Hobson found that there was an increased chemistry amongst the team and the incoming freshmen.

“When [the practices] were smaller group sessions, it gave all of us a chance to get them fitting in well with each other and have more communication on the ice,” she said. “Obviously, there are challenges to this whole thing, but we kind of took it the best way we could and are kind of developing on the spot and thinking of ways to make the team sort of a family here as much as you can before games start.”

Regardless of the various challenges that come with playing hockey during a global pandemic, the Huskies’ expectations for themselves remain the same: a national championship.